The use of light can lead to very diverse feelings: a ray of sunlight calls attention; glare overpowers; the nocturnal sky fascinates, while a dense dark forest arouses fear. Religions have made use of these experiences to convey the mystic aspects of their respective deities — accordingly, so too do their erected buildings.

After the break, an exploration of the different approaches for using light as a vehicle of symbolic meaning and spiritual experience in religious spaces. 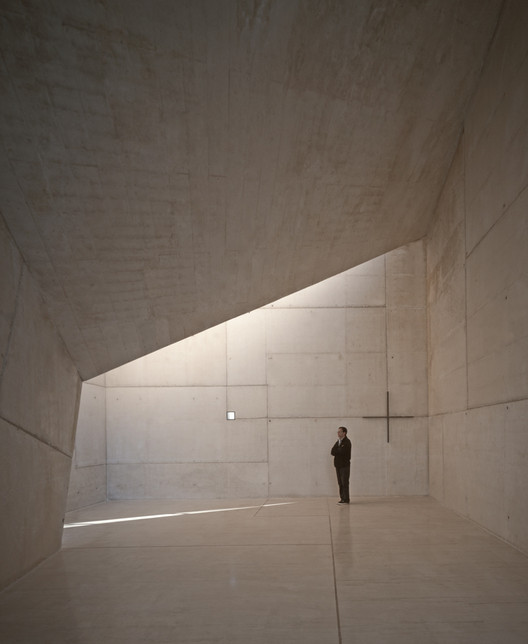 Gottfried Böhm's Mariendom in Neviges, Germany, encloses the contemplative visitor in a dark environment to focus his attention away from the material world and towards inner enlightenment. The daylight, which enters through small rooflights, only slightly highlights the altar. The concept deliberately plays with adaptation, where the eye slowly adjusts from a bright exterior to darker interior, giving the impression that the environment turns slightly brighter over several minutes.

Peter Zumthor further developed this concept of the dark shelter in the Bruder Klaus Field Chapel, Germany, where the cavity is made from a charred black wooden frame. As a counterpoint, small bottle glass portholes add points of light. Zumthor bases the sensual experience on an intense contrast between daylight and darkness that surprises the visitor. The pilgrims are led from a timid darkness to poetic twinkling stars.

The Capilla del Retiro in Chile, designed by Undurraga Devés Arquitectos, surrounds the congregation within a dark coloured wooden box. Only a small gap of daylight between the wall and the ceiling and the indirect reflections that light the space from below (creating the impression that the box floats magically) break up the heavy, wooden structure with suggestions of the outside world.

The Al-Irsyad Mosque in Indonesia, designed by Urbane, welcomes believers with a generous reflecting pool in front of the open facade that reflects light in a very vivid form, offering the believer a transcendent entrance.

In the Church of Light by Tadao Ando, the conventional pictorial depiction of the Christian cross, which would have normally received a light accent, has been substituted by an architectural solution made of pure light. This reduces the luminous surface in the front wall to two crossing lines, thereby intensifying the brightness contrast and placing worshippers in the luminous presence of their deity.

Oscar Niemeyer's Cathedral of Brasilia attempts to dissolve the walls and ceilings into glass in order to let the divine light flow through the whole building. Niemeyer heightens the experience with a carefully designed transition space: visitors leave the bright outside and enter the cathedral via a tunnel.

Philip Johnson’s Crystal Cathedral in California similarly demonstrates an openness to the sky and surrounding world. By allowing light to flow uniformly through the interior, the design also redefines the balance between the altar and the worshippers, uniting both elements.

Regardless of their relationship to religion, many architects are compelled to use light in powerful ways in order to design religious spaces. As Le Corbusier came to realize for himself: “I have not experienced the miracle of faith, but I have often known the miracle of ineffable space.”