From the design to the final inspection in 104 weeks

The reconstructed industrial compound, originally a villa built in 1912 with adjacent manufacturing and stock spaces in the site of the Jihlavan company, is situated near Jihlava’s city centre in Znojemská street.

The client approached us following a positive experience from our previous collaboration on his house. We were asked to come up with a complex project documentation ranging from the initial sketch to the workshop documentation for the manufacturing of interior elements. It was clear right from the beginning of the project that time will be tight. We started working on the project in the autumn of 2011, and as it was a candidate for a European grant, the whole preparation process took a rapid course. The construction took twelve months from the issuing of the building permit. This included interior furnishings with furniture designed by us. The final inspection took place two years after the first meeting about the design. This was not only a great success, but also an accomplishment of our initial goal.

In Palmovka we got the chance to complete the whole project. All the project- and coordination-related work was left to us, which was quite challenging. The opportunity to work even on the smallest details brings great complexity to the job. This brings not only a huge responsibility for the architect, but is also a big challenge for the whole team.

The compound was in a very bade state. The old villa and the manufacturing site were both affected by the years in which they used to serve as a manufacture for airplane components. The main principle of the reconstruction thus became finding the old hidden qualities of the site and adding contemporary design so as to create a site for administrative buildings and an educational centre. By removing old layers of plasterboard, plastering and carpets we found residues of the original materials, which we then tried to bring back to life in our project. Each control day was full of ‘on-line’ decisions about which fragments to keep and which to replace with new design.

We don’t throw away old material

We found many remnants of the old history of the venue on the site. Everything that we could re-use we did. We covered the concrete ceiling and slopes of the old manufacturing hall with sand, we left the industrial lamps in the interior of the building and we used the original wooden floors to make new furniture. The interior is not a museum of old materials, we used all the original artefacts and livened them up with their original function or a new one.

Designing a table is a science

There’s over twenty newly-designed interior elements in the whole compound. We designed several tables, bookshelves, and chandeliers. Finalizing the complete idea of the design is the best reference for an architect. The amount of work you have to put in, however, is very bug and it is important to realize the extent of it in the beginning and also reflect upon it when asking for your payment. Financial modesty of the architect is not suitable here, as a badly estimated financial reward can lead to a collapse of the whole team or can have negative effects on the quality of the design. Clients asking for these services should realize that the added value of a complex design is positively reflected in the homogeneity of the design itself and the value of the whole site.

As part of the interior there is an art piece by Richard Loskot, which simulates atmospheric effects. It was made thanks to a competition organized by us, in which about twenty artists, graphic designers and architects took part. The main positive outcome of the competition was not just the piece of art itself. Thanks to the competition we found several other talented people that we would like to work with once we have the opportunity.

We established with the client right at the start that we would try and obtain a grant from the EU funds. An educational centre for the qualification of technicians of machines working with plastic seemed to be an ideal candidate. Unfortunately, this fund had already gone when we were applying, and so we had to apply for the program of Housing/workshop for renovating, testing and upgrading shaping machines in the end. That actually turned out be a more suitable option, as it precisely fulfils the functional core of the project, thanks to its focus on brownfields.

In our opinion EU grants are an interesting motive for the initiative for technological development, the creation of new working positions and strengthening the local economy, but their success taken from a global perspective is debateable. I’m referring to a large number of projects which are tailor made for the grant programs just for enriching the people participating in them. It is essential to say that in this case we are dealing with purposefully-spent money.

The harmonogram of the grant title came with an uncomfortable level of pressure. Fortunately there were no big mistakes made during the realization of the project, but more of an ease concerning time would probably improve the enjoyableness of our work on the project. One of the main reasons of the success of the whole project was also the fact that our client is an excellent project manager and he was thus able to overcome all the problems that came with the building process.

Based on our experience we could safely say that applying for grants and working on the project at the same time presents much greater demands on the individual members of the tem. It is necessary to increase the workload and to be prepared for many non-standard procedures connected to the process of applying for EU grants.

Description of the architectural layout

The entrance lobby and the connected outdoor space

The pedestrian entrance into the compound is through a gate in Znojemskástreet. Post boxes from rusty metal plates are situated on the entrance gate. This point is also lit by lamps made of loudspeakers. There is an automatic gate which  ensures entrance for cars, and is followed by sheltered parking slots. The garages were built from the original steel hall, which was reduced and adjusted. The entrance into the building into the building is after crossing a small bridge, which crosses over the original approach platform to the passageway. The passageway is used as another commercial venue, and the original approach platform was thus remade into a small garden with wild grass. The entrance lobby with the reception works as a junction of the individual operations, as well as a meeting point. The entrance area is separated from the educating wall by a glass wall, and so the visitor can take a peek at the process of work with plastic. The lobby as a relaxation area is also livened up by the art installation by Richard Loskot.

Apart from the lobby, there are also toilets, a conference room and offices on the ground floor. The bridging in the glassed in passage connected previously divided areas.

Stairs from the lobby come up to the first floor. An open office space was created by knocking down the original wooden partitions. This is followed by a newly built space for the kitchen, an outdoor sheltered terrace and toilets. In the future we are thinking of using this space for business meetings.

By passing through the offices we get to a second staircase which leads into the attic. 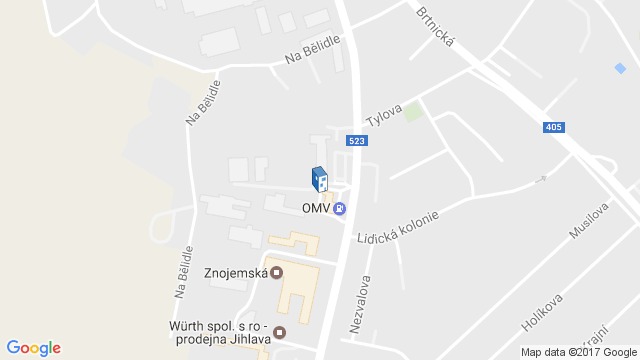 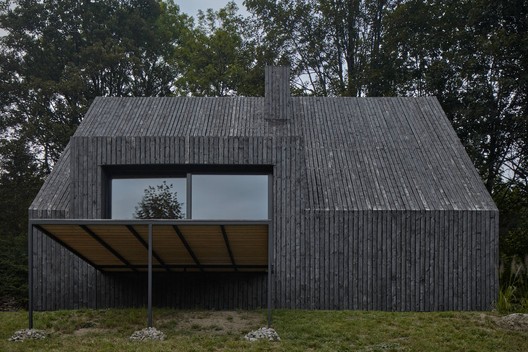