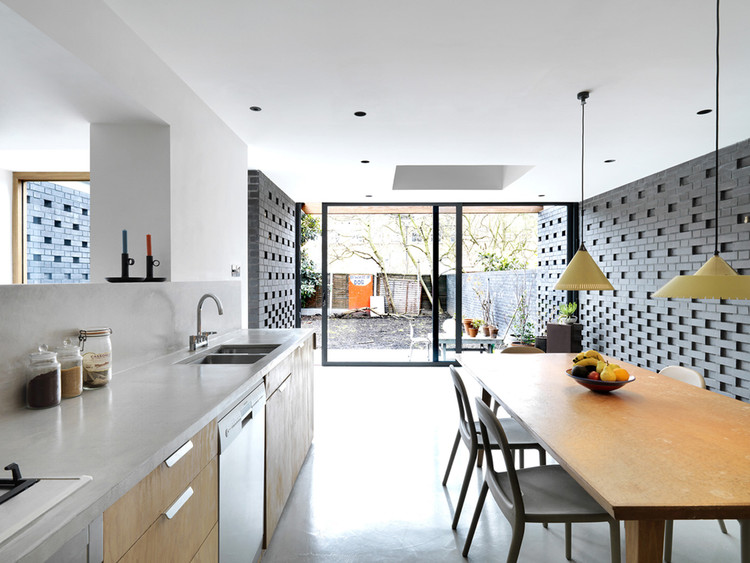 This project involved the complete refurbishment and extension of a late 1960’s 3-storey terraced townhouse. An ex-local authority property, the building sits at the end of a row of 6 houses which form a block within a street made up mainly of semi-detached late-Victorian houses, many of which are listed. The terrace is an anomaly within the Conservation Area context of the street.

The brief from the client was to create a large and special family home. Being practising Buddists, one specific requirement was the careful consideration and positioning of the Butsudan within the house. This I felt needed to be at the heart of the house, so much of the internal remodelling was centred around this, as well as considering the connections between new and existing volumes at ground floor and lots of natural light.

The existing building was in fairly poor condition and much of the existing external fabric needed to be up-graded. The refurbishment included removing all of the exterior wall panels and windows, leaving only the solid sections of brickwork to the side and front elevations. The articulation of the façade through horizontal banding, the original brickwork and the window fenestration were all considered during the design phase, and a decision was taken at an early stage to acknowledge the rhythm of the rest of the terrace.

New larger windows within the existing openings were proposed to the front of the house and the upper rear façade, to maximise natural light. The 1st floor rear façade (the second living room which also houses the Butsudan) was replaced with full-height glazed sections which slide to open up over the future green roof of the extension and garden below.

New insulated cavity walls replace the thin white PVC wall panels below the windows and here a black engineering brick was introduced to contrast with the existing. The new brick walls not only improve the overall thermal performance of the building, but the exterior brickwork introduces a playful articulation of surface with protruding bricks to the upper exterior walls. In counter-play, an inverted and perforated brick surface was introduced to the rear external and internal walls at Ground floor level. The new walls create a textured and patterned surface, which changes in relation to shadow and light.

The extension to the side and rear at the Ground floor level, provided an additional 50m2 of space to house a new entrance, playroom, kitchen, dining and living area, which wraps around the existing footprint of the building. At the rear of the side extension, a large fixed timber framed window overlooks an external terrace and frames the garden beyond. The rear extension, which sits forward into the garden is framed by two large aluminium framed doors, one of which slides to open up the living/dining and kitchen area to the exterior. Both side and rear extension are unified by a large concrete external terrace, framed by dark brick walls, and an extended galvanised steel frame at roof level that provides a structure for a future brie soleil. A 7m long double timber beam stretches across the full width of the rear and side extension. The pocketed and perforated dark brick walls, now populated with trinkets and ornaments, extend inside to define the living area, marking the threshold where the original footprint of the house ends and the new space starts.

The existing garage previously positioned and extending back into the front of the house, was reclaimed as internal space, and the original entrance converted into a ground floor bathroom. A continuous flow of circulation is created around and between the new spaces and the existing house.

At 1st floor level, a new opening was made in one of the existing walls, to allow the 1st floor living room to be opened up to the rest of the house, creating an uninterrupted flow of circulation through the living room and around the stair landing. Two full height doors at either side can be opened to sit flush against central walls of the same depth, giving a sense that the space is open plan with a full height cabinetry unit in the middle. 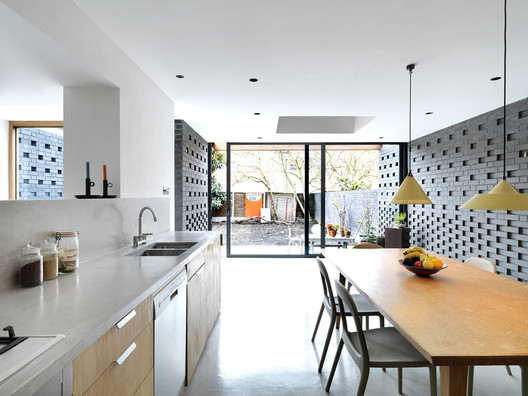