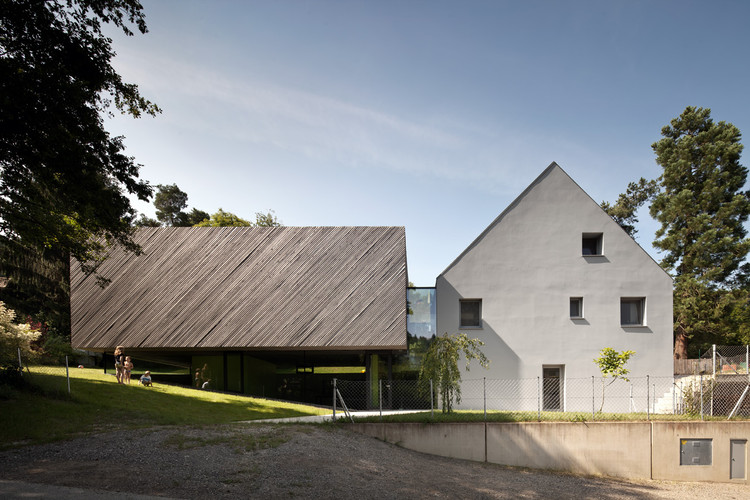 Text description provided by the architects. After the birth of their first daughter, the young family were taken by the idea of a single-family house in the countryside. In the wienerwald they found a little house in need of rehabilitation with a large garden. Prospective possibilities of enlargement were already investigated before buying the property. The lean budget required a high portion of own capital in order to take the first steps in renovating the old building and undertake thermal sanitation. Upon completion of sanitation, the second child had already been born, and thoughts regarding an annexe became more concrete. Also, the grandmother’s wish for a granny flat should be taken into consideration. Building regulations left little leeway regarding building density and height. In order to accommodate the entire spatial programme, developing a two-storey structure was mandatory.

Illumination of the partly subterranean granny unit in the basement is guaranteed by a strip of windows adapted to the site characteristics. A free-standing sanitary core divides the open space into sleeping and living areas. The possibility of later converting the granny unit into a small doctor’s practice was taken into consideration during planning.

Instead of the former treehouse, a wooden box floats above the ground floor which in the first development phase is intensively used by meanwhile three children as a large, 3.5m high playroom including a climbing wall, swing, and football goal. All installations have already been prepared for later partitionment into up to four separate rooms.

The basement including the cantilevered ceiling was done in site-mixed concrete. The wooden box was constructed with solid wood tiles and wainscoted on all sides including roof and soffit with diagonally running larchwood latches. Due to the complex geometry with its double mitre cut the grey-glazed latches were mounted by staff of the architectural practice and the principal themselves. The wooden latches are a dominant design element not only outside, but also as ceiling lining in the granny unit and wall panelling in the glass joint between the existing building and the new construction.

Instead of the former gas calorific value heating, the whole building is now supplied with warm water and heating by an air heat pump. Apart from the high thermal standard, the long-term flexible and adaptable building makes a distinct contribution to sustainability.

In times of a rising number of single-person households, high divorce rates and single-parent families, this project is an example of how three generations can live together in one building in contemporary architecture. This is aided by the different room atmospheres on various levels of old and new building parts in order to fulfil the changing requirements of common areas and possibilities of retreat. The last extension for the time being was the realisation of a large treehouse with a rabbit hutch.