American Artist Janet Echelman is to premiere her latest, and largest, sculpture in Vancouver. Widely known for her artistic ability to reshape urban airspace, Echelman's sophisticated mixture of ancient craft and modern technology has led to collaborations with aeronautical and mechanical engineers, architects, lighting designers, landscape architects, and fabricators to "transform urban environments world wide with her net sculptures." Using a light weight fibre to elevate her monumental "breathing" forms above the streets of urban centres, Echelman's new sculpture will be of a size and scale never before attempted. 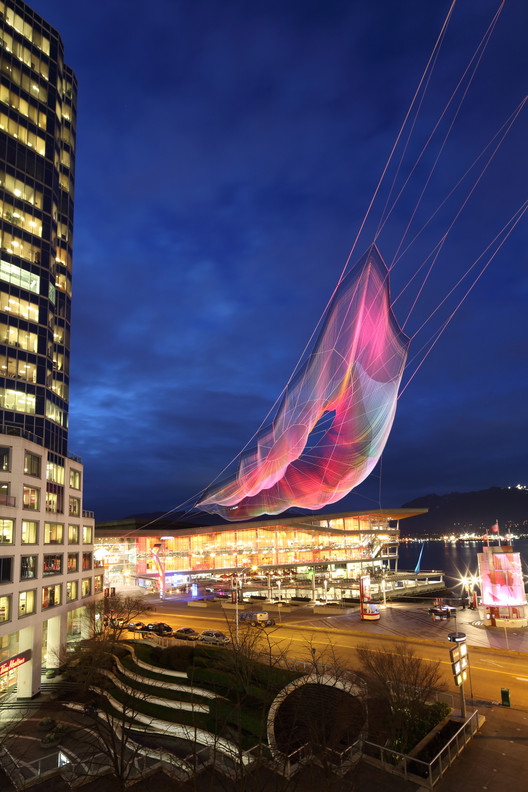 Honeywell Spectra Fiber, Echelman's material of choice, is "pound-for-pound fifteen times stronger than steel but light enough to float," giving Echelman’s sculpture the strength it needs to sustain winds of up to 96 miles per hour while remaining light enough to attach to existing buildings and withstand eventual transportation with ease. The sculpture's first installation will suspend 745 feet across the waterfront between the Fairmont Waterfront Hotel and the Vancouver Convention Center.

According to Echelman, "the fiber gives my work the strength it needs but allows me to create a structure that is light and delicate so that it moves with the wind." According to Honeywell Spectra Fiber, their made from "ultra-high-molecular-weight polyethylene using a patented gel-spinning process. The fibre exhibits high resistance to chemicals, water, and ultraviolet light."

The sculpture will premiere on the 15th March 2014 in conjunction with the TED conference’s 30th anniversary in Vancouver.