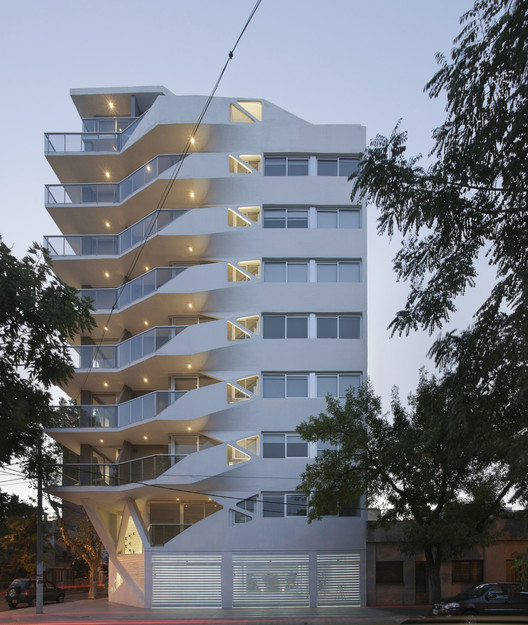 Jujuy Redux is a mid-rise apartment building located in Rosario, Argentina. As our second commission for an apartment building in Argentina [located also on Jujuy street] the project presented the possibility of rethinking urban housing. The project consists of thirteen small, shared-floor units and a Duplex organized in a cross-ventilated layout. The Ground level provides parking for 10 vehicles, and a common terrace on the 8th floor outdoor leisure spaces.

Occupying a corner lot, the new development aims to revitalize Rosario’s traditional neighborhood of “Pichincha”. Adjacent to both the historic downtown and the Parana Riverfront, it enjoys generous street sizes, large amounts of vegetation and a low urban density of cultural heritage, making it the ideal environment for young families and students. As a result, the demand for new mid-rise interventions stands at an all-time high.

Jujuy Redux proposes a subtle delineated mass, operating both at the scale of the entire volume and the scale of each apartment. This flexible duality overcomes issues that exist with many mid-rise housing typologies, such as the occurrence of fixed, scalar transformations that play either with the envelope as detached from the units, or with the units alone.

A transition from mass to volume, from volume to surface, induces a visual and physical distortion at the pedestrian level. More importantly, it enables the weighty appearance of the building to sinuously dematerialize towards the corner, allowing the social space par excellence of each apartment to visually connect with the pedestrian activity in the street below.

Problematically, Balconies are the inevitable cultural element in mid-rise residential buildings of South America. Typologically, balconies have become the playground for formalism, often neglecting issues of spatial integration into an overall scheme, and worse, dissociating them from social issues and human inhabitation. By contrast, the formal, spatial and material treatment of the balconies of Jujuy Redux is one of the most significant, innovative and socially performative aspects of the project.

We recognize the open cultural conditions associated with balconies in housing buildings that are not yet coded with an architectural typology. Jujuy Redux’ balcony design takes inspiration from the polygonal bay window as well as from the horizontal balcony. While traditional bay windows perform strictly as interior spaces, Jujuy Redux balconies perform directionally as they open up towards the corner, allowing for both exposed spaces with oblique vistas as well as more intimate ones, sheltered from the weather and direct views from the street.

While the project is built almost entirely of cast-in-place concrete, the interior space of the balconies is clad with grey venetian tile. This arrangement produces a sense of contrast between the outer white concrete skin and the inner walls of the balcony, while also accentuating a sense of spatial enclosure within the outdoor living space of each apartment, enhancing its use as each inhabitant negotiates the threshold between private and public space.

Spatially ambivalent and nuanced, Jujuy Redux’s balconies are conceived as highly articulated pieces of scalar diversity that incorporate apertures, railing, direct and indirect LED lighting as well as material changes. A built-in bench provides a place for leisure activities and small gatherings, while allowing inhabitants to tailor its use according to their individual needs.

Down on the Ground: Opening the Corner

At ground level, concrete cross braces receive the diagonal deviations produced by the balconies, creating a double-height urban corner free of columns. This cantilevered corner gives way to an inconspicuous building entrance located at Jujuy Street, followed by a sequence of spaces: a gated porch and main hall linked by a two-storey glazed doorway, and the elevator lobby, all clad in polished Carrara marble.

High Above: Conquering the Roof

The formal sequence of diagonal deviations intensifies at the Roof level, where the building tapers to accommodate a set of mechanical spaces, a corner duplex, a common terrace with a solarium and semi-covered areas for barbecuing- all of them enjoying attractive views of downtown and the riverfront. Visually, the building opens up and lightens its contorted mass as it rises above the ancient grove in sequenced diagonal recesses to meet the city skyline.

Following the geometry of the balcony system, the triangular openings along the shell open up a series of threshold spaces to control sunlight, natural ventilation and views. Where the shell doubles up, it becomes perforated, creating a passive solar technique that, in addition to the cross-ventilated layout of the apartments, helps produce an effective natural cooling system. Similarly, the chamfered corner and main entry are punctured, albeit in a larger number, allowing the building porch to receive filtered morning light while offering passers-by voyeuristic peeks into the building.

In and Out of Material: White Concrete

White walls have traditionally been associated with the stripping away of details and ornamentation, often resulting in a stale materiality, like the overt whitewash found in many nineteenth-century buildings. Alternatively, Jujuy Redux explores a different kind of whiteness: one that privileges overall plasticity over local materiality and engage in high or low contrast to address depth and flatness, subtle white to off-white. 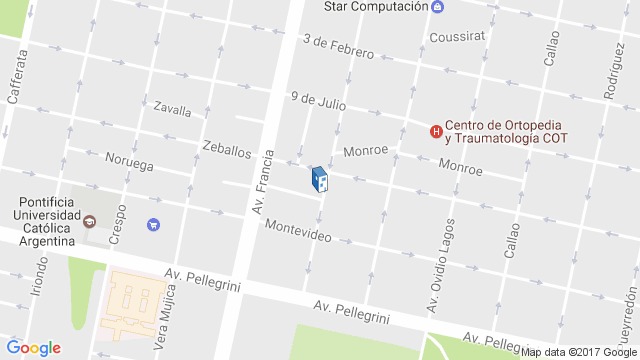