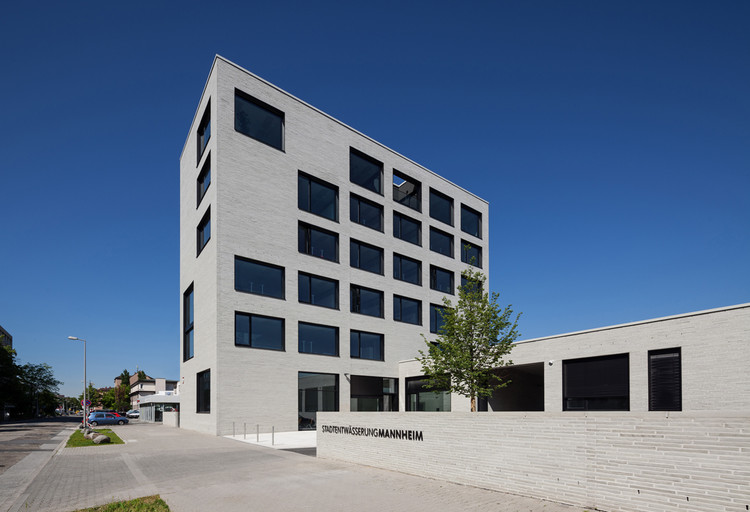 The new development of an administrative and commercial building, issituated in the north-east of Mannheim in the Wohlgelegen district within heterogeneous surroundings of one-to-eleven storey urban developments, surrounded by apartment, administrative, commercial and retail buildings.

The site is accessible from the Käfertaler Straße to the B38/Friedrich-Ebert Straße, the main north-eastern artery to Mannheim City Centre.

The area is characterised by heavy traffic caused by heavy goods vehicles and passenger vehicles which pass through Käfertaler Straße and its surrounding streets.

Exposed brickwork was used in the construction of the rigid ensemble of the two-storey 'Portal' houses and the one-storey motor vehicle pound. This material defines the district and can be found in many apartment buildings in the surrounding area.

The historic ensemble influences the concept.

The usage of the municipal water treatment works and the waste management system with its depot and administrative buildings is structurally very similar. Thus, the identity of the municipal works within its heterogeneous surroundings can be strengthened.

The existing scale and materials are incorporated, together with a typological continuation of the 'Portal' houses facing the street, allowing for a reinterpretation of the new administrative building at a far more significant height.

The six-storey administrative building in its stream-lined and impressive position on Käfertaler Straße is not just the new address for the municipal water treatment works within the streetscape, but also clearly defines the cityscape, far beyond the B38.

The visitor arrives at the main entrance via the forecourt to the north-east. A foyer and auditorium can be found on the ground floor of the administrative building and can be combined to be used for various events and functions.

The administrative area is accessed from the foyer. The two-storey Planning and Construction Department can be reached viathecentral staircase which, via a communications room covering the two floors, offers splendid views of the Käfertaler Straße. The Commercial Department can be found on the third and fourth floors. The two-storey high communications' area which is to the west of the building offers views of Herzogenriedpark and the City of Mannheim.

Views of Mannheim and its surrounding areas can be seen from all sides of the management offices on the top floor of the building.

The office layout is flexible, column-free and well-lit because the concrete ceilings are mounted to the wall on the narrow side of the administration building, allowing for customised space and use allocation.

The operational area can be reached via the depot and can be found in the one-storey section of the building which contains men and women's changing rooms, foreman's offices, social rooms and break rooms.

The access and parking situation on Käfertalerstraße in the north-east has been retained.An outer wall separates the street from the break area and visitor parking.

The building is designed as a column-free reinforced concrete construction with a stiffening core. The 28 cm thick reinforced concrete ceilings allow for this span, for flat ceiling soffits as well as for the integration of thermal mass activation, lighting and acoustic elements.

The new construction is designed to meet energy optimisation requirements, according to the Green Building energy label. Heating and cooling elements in the single circuit system allow for thermal mass activation of the ceilings.

Heat exchangers enable controlled air ventilation and extraction. Ventilation ducts are installed in the double floor in the administrative area, resulting in 60 cm thick ceilings. Ventilation and cables in the operational area can be partially seen under the solid ceiling and are partially within suspended ceilings.

Heat recovery takes place from water in the waste-water system via a heat exchanger in Käfertaler Straße waste-water sewer. This system also enables cooling in the summer.

A high level of user comfort is attained by homogeneous enveloping surface temperatures in the interior and a draught-free permanent fresh air supply.

Depending on the use and the function, floor-to-ceiling glazing alternates with glazing at table and shelf level.

The façade comprises oblong-sized clinker-faced brickwork with an insulation thickness of 20 cm on the outside of the 25cm thickreinforced concrete wall. The windows are triple-glazed with an external blind installation to provide shading from the sun. The raffstores are controlled by an effective central building control system, dependent on the sun's position and the outdoor temperature. This greatly reduces additional heat transfer from outside in the summer months. Solar energy can be used in the winter months.

Exposed brickwork has been chosen to tone in with the neighbouring listed buildings, in keeping with the character of the masonry used in the many typical buildings which can be found in the Wohlgelegen district.

The façade of the new building is continued in the north-eastern one-storey area of the existing building, serving to ensure a uniform appearance towards Käfertaler Straße. 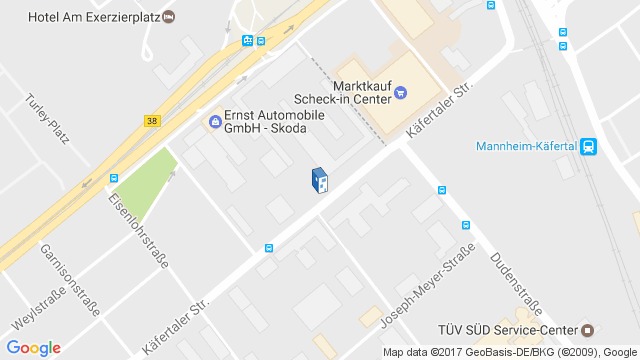