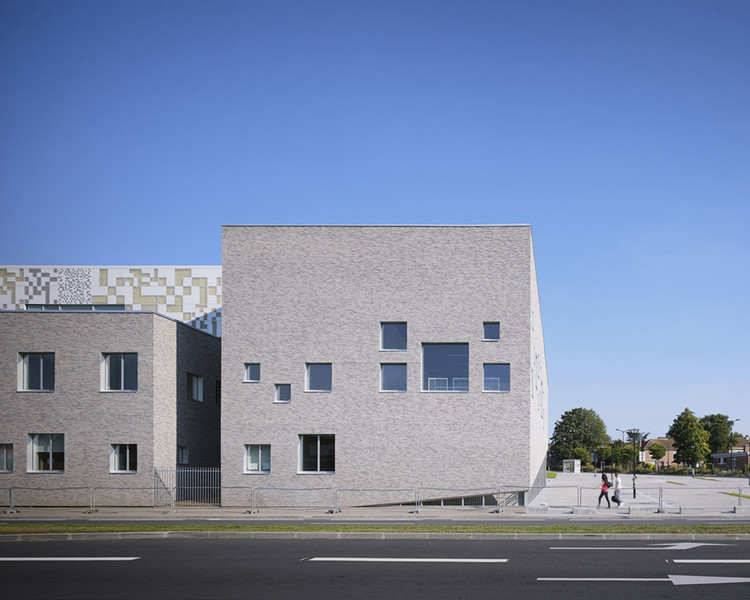 Open to the influences of the city which isvery urban from the entry plaza, the school takes the public space designed by Jacqueline Osty and extends the hardscape through the transparency of the entry hall to the interior courtyard where the paving design reflects the exterior patterns of the building.

Collège Lucie Aubrac is the first secondary school in the region to achieve the BBC label (Low Consumption Building). The project is located in the western part of the city of Tourcoing, in a primarily residential neighborhood along with some educational and social amenities. Due to its remarkable location at the edge of the city, along with its tranquil monumentality, the new school adds a new magnitude to the entry to the city. By opening up to two major axes, Industriel Boulevard and the street Fin de la guerre, the new building draws from the best of the natural conditions of the site.

The overall organization of the project is fluid and comprehensible, allowing the visitor to orient themselves easily. The four principal poles of the school are defined and organized so that the elements linked to cultural activities are situated along the entry plaza, the teaching spaces form a “U” around a courtyard, the sport facilities are grouped to create a block of interior and exterior sport programs, and finally the cafeteria is organized along a vegetal axis that crosses from the garden of letters to the educational gardens. Generally, the volumes alternate from two to three levels. The simple, naturally lit circulation spaces facilitate control while visual perspectives open towards the entry court and the surroundings (notably with views towards the Sainte Anne bell tower).

The volumes clad in brick punctuate and form the limit of the school along the public spaces creating a consistent belt: a uniform mass that provides a majestic singularity to the project.  The materiality is embodied with a strong local identity while the color and forms become quite contemporary. The light tint highlights the open joints of the brick work, which has been laid with an offset at varying depths that adds to the tactile and textural dimension of the material. Occasionally, the brick walls become perforated around the exterior terraces, allowing a filtered light to emit from the interior of the school in the evenings.

The principal building of the school housing the classrooms sits along the boulevard Denis Papin and forms a volume with smooth, animated facades. A perforated white metal cladding is implemented in conjunction with a waterproofing membrane of varying colors, and folds to create sun shades in front of the openings. Furthermore, in certain locations, the perforation pattern becomes a functional flash code linking to the site of a web-magazine run by the students. Symbolically, it anchors the school in the 21st century and represents an open spirit and transparency.

The transparency is corroborated by the lifting of certain brick volumes to allow views towards certain activities through the glazing, and by voids in the volume of full height glazing revealing the entry hall and the work of the students.

On brick facades, the mullions create a unique language of extruded frames of different sizes, positioned according to specific axes.

The interior is futuristic:  raw concrete dominates the circulations halls, lightened up by rare touches of color and the warmth of the wood work of the doors and mullions. Modest and restrained, the spaces nevertheless open up to subtle views towards the significant horizons of the city.

The generally mineral atmosphere is complemented and nuanced by a strong presence of vegetation. A lower part of the facades of the sport halls are covered by a metal mesh supporting various species of plants, while the cafeteria and covered playground are covered by a green roof. The faceted volume of the roof extends the vegetal nature of the courtyard and the gardens. The educational garden is formed of several parts of different themes: a vegetable garden, a wetland garden around a learning pond, a garden of shadows and light, and a natural garden. This ensemble constitutes an interface between the courtyard, the educational buildings, the staff housing, the sports facilities of the school and the rest of the neighborhood. 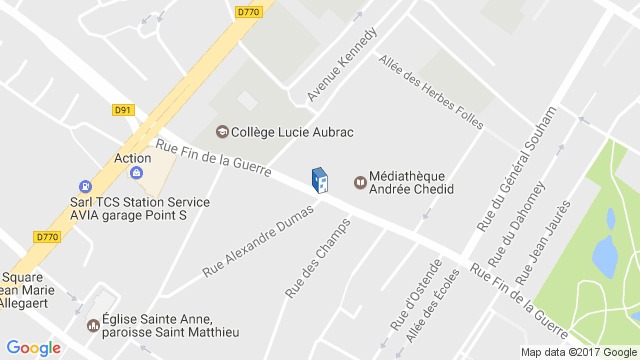