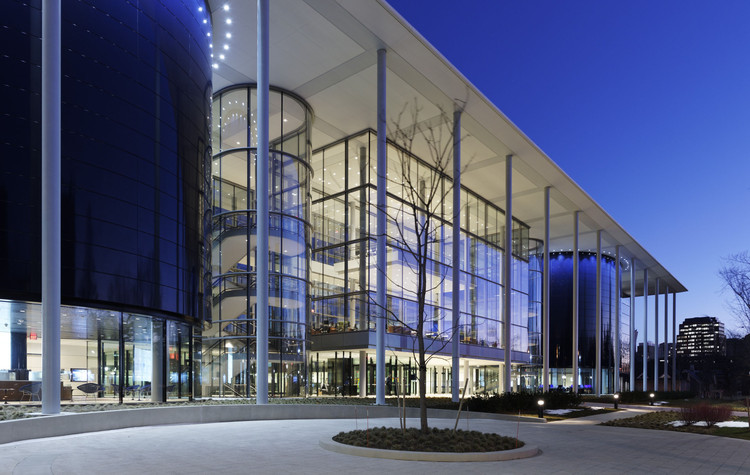 Text description provided by the architects. Inspired by Yale School of Management’s reinvention of business school education and pioneering integrated curriculum, the new Edward P. Evans Hall combines world-class teaching facilities with inspirational social spaces. The design unites Yale’s faculty departments in a single location for the first time and brings a high level of transparency to the traditionally enclosed college courtyard, creating a green heart for the campus community, which is visible throughout the school.

Lord Foster, a former student of Yale School of Architecture, gave a lecture in the new Edward P. Evans Hall on 9 January as part of the building’s inaugural celebrations.

The classrooms are contained within sixteen double-height oval drums, arranged around the central courtyard. Guided by the principle that interactions outside of the formal teaching areas are as important as classroom-based learning, the five-storey building incorporates a variety of social spaces, designed to encourage collaboration and promote a sense of school spirit.

The social spaces are concentrated at ground level, where there is a coffee shop, media library and a large common room, opening out into the courtyard. On the second floor, the classrooms are connected by a wide internal circulation ‘cloister’ – the glazed façade around the courtyard follows the undulations of the blue classroom drums to define bays where students can sit and gather. The third floor is pulled back from the facade to form a mezzanine, opening visual connections between the different levels.

The design process involved close collaboration with faculty members, as well as analyzing interactions within the classrooms, experimenting with different spatial configurations and producing full scale mock-ups to allow teaching staff to experience the lecture space. The resulting 16 classrooms are unique, tailored to Yale’s curriculum and can support every style of learning, from team-based working to lectures, discussions ‘in the round’ and video conferencing. Integrating state-of-the-art technology, the facilities include simultaneous translation, filming, multimedia displays and enhanced acoustics to ensure that every student has the opportunity to see and hear clearly.

A number of significant works of art have been commissioned for the new building. These include bold murals by Sol LeWitt, which bring the circulation spaces to life in swirls of color; and a site-specific installation by the Swiss artist Adrian Schiess, whose 90 painted panels appear to magically change color as the viewer moves around them.

The semi-circular Beinecke Room on the second floor provides a flexible events and meeting space with capacity for 80 diners, and is connected to a large, curving terrace with views over the natural landscape to the east. A 350-seat auditorium below the Beinecke Room provides an impressive venue for Yale’s high-profile lecture series and, unlike traditionally closed auditoria, retains a visual connection with the courtyard outside.

This open, welcoming approach extends to embrace the wider campus: the transparent façade opens the building up to Whitney Avenue, making visible the feature staircases contained within two glass drums on either side of the entrance, and showcasing the School’s activities. The roof is held aloft by slim pillars and projects to shade both the façade and a wide entrance plaza.

Targeting the highest environmental standards, the sustainable design responds to the unique climate of New Haven and the patterns of use specific to a university faculty. The building utilizes chilled beams, a displacement system of ventilation and solar shading, and the building’s high performance envelope with solar responsive shading naturally reduces energy demand.

“As a former student, it is a very special honor to design a building for Yale’s campus, to stand alongside architecture by such luminaries as Paul Rudolph and Louis Kahn. Learning is not only about the classroom – it is about the social spaces, grounds, cafes and the relationships that are formed. The people that I was exposed to at Yale, and the collegiate style of working that I found there, have influenced the way that I have built my own practice – our London studios, like those at Yale during term time, are open twenty four hours, seven days a week. This philosophy of hard work and collaboration – both fundamental to leadership – has informed the design of the Edward P. Evans Hall. I hope that it will provide an uplifting place to study, which can inspire future generations of business leaders.” 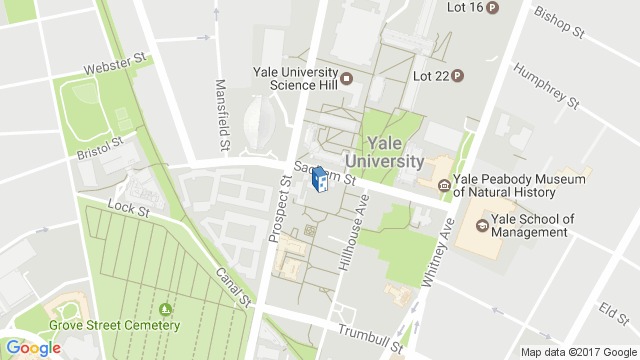