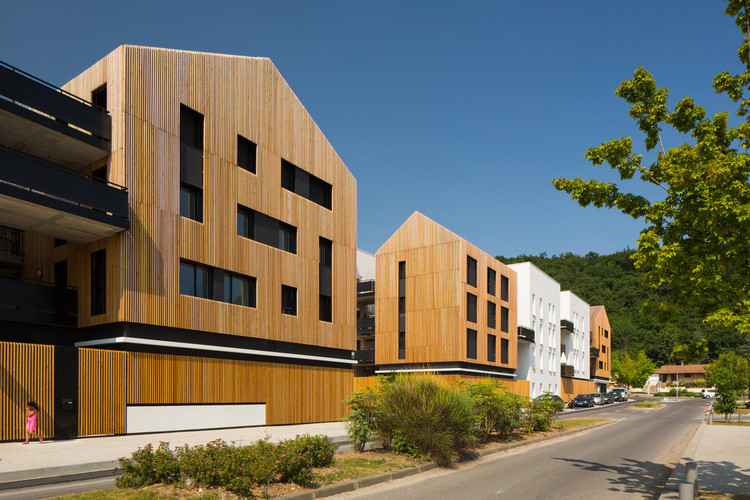 « Rives de Gravette » is a 36 apartment and business premises development situated on a hillside in the lower part of Floirac. Its construction marks the beginning of urban renewal in the area. In this housing estate, clean-lined and modernised iconic shapes of a house and of a block of apartments are simply interconnected.

The 36 flats are equally distributed over 3 floors. Each floor has four flats (2 three-roomed flats, 1 two roomed and 1 four-roomed flat) arranged around a communal landing.

Fragmentation
This housing development is about scale : scale of the town, scale of individual flats and the intermediary scale of public spaces around them. Our work was therefore primarily based on the concept of urban transition between individual social housing, to the South of the development, and more compact apartment blocks over 6 floors to the North, in the « avenue de la Liberation » area.

Alternating solids and spaces, and dividing the building into blocks result in a human scale estate for both tenants and passers by. Each block can easily be identified as a single structure, yet all blocks are linked together forming a varied and coordinated patchwork.

Repeating a sequence of structures prevents the overwhelming effect a single linear block would have. It also favours real interaction between the estate and the community. This is further reinforced by architectural choice which reflects accepted urban culture: in our collective psyche, as in this housing development, the archetypal house looks like a house from the Monopoly game and a block of flat is cube shaped.

Movement and ownership
Diversity and fragmentation would have been rhetoric had they merely stopped at the division of the building into individual blocks. To make sense, we had to keep the same architectural language all the way through. Having separate yet interlinked blocks allows for several outdoor communal areas. These are designed to be used in many different ways.

Special care was also taken in designing pedestrian routes and communal space. Access from the street to each apartment door follows a sequence, thus naturally encouraging tenants to develop a sense of ownership. There is no main central entrance door at the front of each block. Instead, we opted for sliding side entrances located between buildings. This gives passageways and outside communal areas a semi-private feel which contributes to a more homely feel and increases further the sense of ownership. This way, each block offers a graduation of privacy from the public area to the main communal lobby, leading to outside alleyways, then to the semi-private landing and finally, into each flat.

Integration within the environment
The landscaping work reflects lower Floirac's scheme for urban renewal.The landscaping in the parking area and to the northern side of the development maintains links with existing housing estates, via pedestrian and cycle routes and pathways, thus fully integrating the housing development into the neighbourghood. The densely planted area between the two main blocks has been designed as a gateway to the rapidly developing « Liberation » area.

The landscaping in « Rives de Gravette » contributes to the larger scale municipality's objectives of producing an increased number of green spaces.

Individual social housing in a multi layered development
The multi layered design of the blocks, allows each flat to enjoy four different aspects, therefore ensuring optimum sunlight during the day in different rooms.

All living rooms, in particular, are located to take best advantage of the sun : they all benefit from either two or three aspects. On the outside, at the end of each pathway, there is a white mesh screen before each private terrace. Nestling between blocks, terraces are staggered to allow double height and light on each floor. Outdoor amenity space for each flat is therefore totally private and tenants are free to customise the area as they wish. 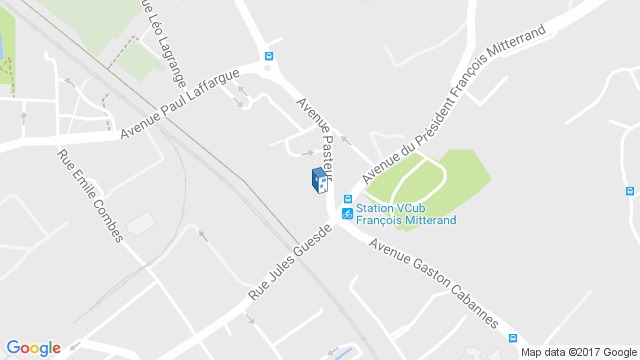