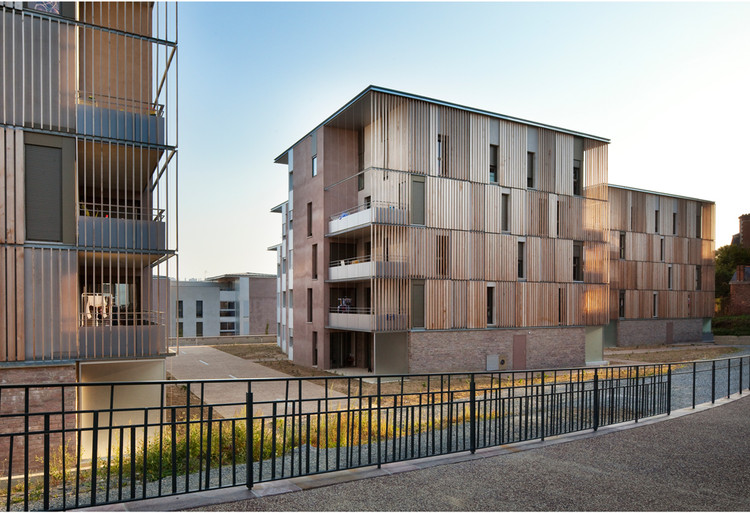 Text description provided by the architects. Dreamed by of Edmond Herve, Mayor of Rennes from 1977 to 2008 and a leading figure on the French political scene, the new Lucien Rose Complex created by Atelier du Pont is in keeping with an area that has historically belonged to the city’s more prosperous inhabitants: the down-town Thabor Botanical Gardens district. This could have evoked a trend from the distant past – a sort of ‘ghettofication‘ where the poorer classes took over ‘posh’ neighbourhoods but it has resulted in a happy marriage instead. An alchemy between radicalism and social integration, the old and the new, protected areas and sympathetic town planning, public facilities and social housing, the Lucien Rose story is one of reciprocal enhancement for users and employees of the park and the library, and for old and new residents. The overall layout of the new district, consisting of 81 social housing units, car parks, a public library, new paths plus access to Thibor Park, has been expansively designed to give all citizens of Rennes a new view of the park that differs from the ground plan originally proposed by the Town Council.

The project created a series of 6 buildings, each fairly compact but spaced out and of different sizes (from town house to small apartment block). The whole layout provides a totally new alternative between high density and ‘urban sprawl’. The Lucien Rose Complex has become a ‘neighbourhood’ where users of the park and library, residents, locals and neighbours intermingle and live together. It creates an open space in the city, with the lane that leads to it linking with an existing road below. Following careful attention to scale, dimensions, materials and colour tones, the entire estate has been sympathetically and sensitively grafted onto the existing open-mesh fabric of smart detached houses, a school built in the traditional style and a famous park.

Everything combines to create sensitive links between the new complex and its urban environment. Through its programmatic mixture and architectural innovations, the estate has become the adjunct to a small urban redevelopment scheme, moving the area’s sociological dividing lines and ‘improving’ it with beneficial interaction between architecture and landscape, culture, outdoor activities and housing, etc. – it is much more than simply an arbitrary placing of social housing in a middle class town centre.

The housing units are in five separate sections. Three apartment blocks border the northern piece of land at the edge of the park, while smaller plots are laid out so as to bring cohesion and aesthetic consistency to the estate as a whole. Enjoying a unique park ambiance, their wide shady balconies provide unobstructed southerly views of the city of Rennes. Clapboarded on their north-facing facades, they merge into the overall wooded background, are invisible from the park and do not affect the scale of the surrounding detached houses. These ‘nested’ blocks of 81 social housing units slot perfectly into an outstanding site in the heart of Rennes’ up-market district.

Its treatment as a completely separate building attests to its specific cultural purpose: it is a real ‘local library’ enhanced by its contemporary look, simple construction materials and elegant shape. And yet, with its setting on a slope, its stepped roof and rose garden, it blends naturally into this steep hillside. Its siting has opened up a new access to the overhanging Thabor Park, via a new 19th century wrought iron entrance gate from the old Oberthür printing works.

Its interior design is in keeping with current practice. The predominant bare concrete grey colour that harmonises floor and walls is warmed by the clear bright orange of the video section and the clean lines of its agency-designed furnishings. The perforated metal ‘box’ ceiling admits a clean warm light via three roof openings. The entire building exudes the disembodied atmosphere of an art gallery.

Interior areas are put to simple and obvious uses. The enormous entrance hall can be transformed into a screening or exhibition room, the stairs and steps lead up to the reading room, and offices are at ceiling level overlooking the reading room and entrance hall for insulation and security. Everything is perfectly controlled and elegant, simple and unfussy, providing comfort and calm in a welcoming ambiance. 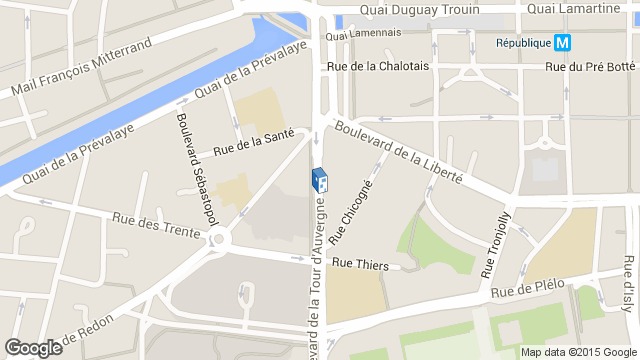