"Bricktopia", by the architects of the international collective Map13, is the winning project in the "Build-it" Eme3 International Architecture Festival, held on June 27-30 in Barcelona. The pavilion can be visited throughout the summer at the square of the former spinning mill Fabra i Coats in the Sant Andreu district.

This intervention sets a new square which can house different activities, both under the pavilion and around it. Public spaces for bathrooms, sun, bar and stage for enjoying the summer 2013. It is a brick domed structure that employs the traditional construction system of a partitioned vault (or "Catalan vault") computed with new digital tools for the structural optimization of the geometry. 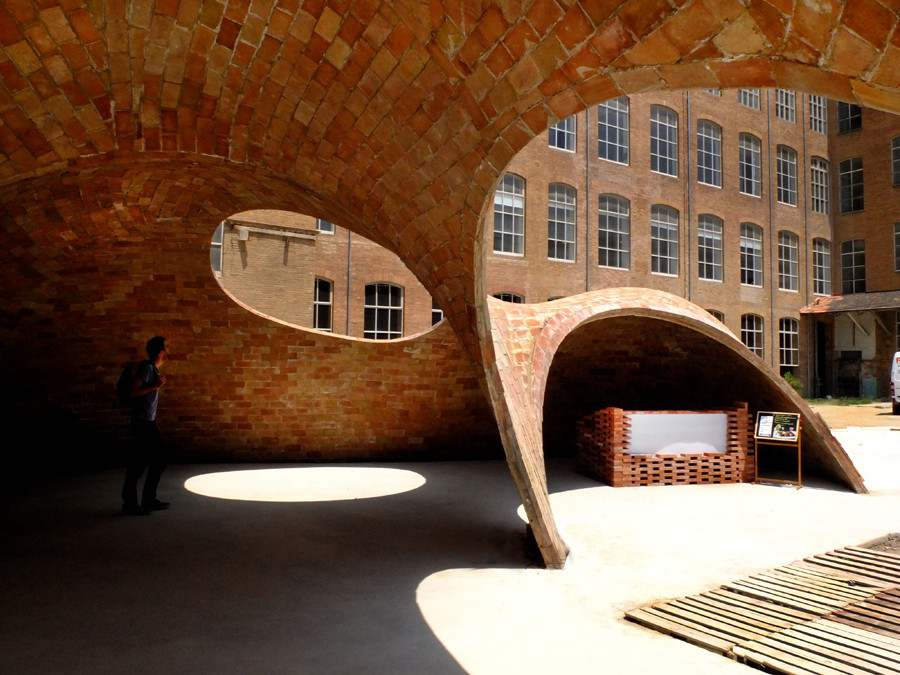 The proposal is the result of academic research currently carried out by Marta Domenech Rodriguez, David Lopez Lopez and Mariana Palumbo Fernandez, co-founders of the Map13 collective, with the help of different professors from different fields and various schools of architecture.

This pavilion draws on the prototype built by Philippe Block, Matthias Rippman and Lara Davis at the ETH Zurich, with which they demonstrated the reliability of RhinoVault, a plug-in for Rhinoceros, used for the design of the constructed dome.

As this is an experimental project which makes this traditional system work at its limit, its implementation has required expanding the team, joined by Paula Lopez Barba and Josep Brazo Ramirez, and much effort from Eme3 festival that promotes and is defined by the support given to young people to carry out their project, the companies who contributed material and labor and the workers, volunteers and architecture students who built it.

This research collects material tradition and constructive knowledge of the partitioned vault and combines it with contemporary computational tools. The project that develops in the courtyard of this nineteenth-century factory uses the same material, raising a new topography in the old courtyard, but counters industrial construction, offering a concave and protected space that links the origins of all cultures.

The vaulted pavilion raises the contemporary validity of this traditional system, native of Catalonia and widely used in various parts of the world for centuries. It is an economical, sustainable, formally and functionally versatile system, while offering the possibility of its construction in developing countries for roofs, stairs, water channels, etc.

Unlike the type of construction that we are used to seeing nowadays, this project aims to restore the expertise and imagination of the hands who build it. Bricktopia has been constructed by excellent builders who have made a work of unprecedented craftsmanship. The challenge in a construction of such complexity defines the work required here as opposite to mechanized work.