The Bubble Building, a "renovation of a common, old and unattractive building" in the centre of Shanghai, is a simple design containing complex environmental qualities. Unlike a conventional retrofit or renovation, 3GATTI's proposal places inflatables made of white antibacterial technical outdoor nylon, in front of the windows on the existing building. Their concept was to "create an icon-building, a kind of landmark very easy to recognize, a kind of sculpture with a strong character able to detach itself from the boring cityscape" with the ultimate aim to attract customers to rent both the office and commercial spaces.

The inflatable exterior also has environmental aspect, the air space between the fabric and the window acting as "efficient insulation to keep a desirable interior temperature" and "oxygenated due to the green barrier between the glass and the fabric." Described as a "micro greenhouse," the structure is expected to "constantly exchange air pressure with the office interior" providing an optimum internal climate whatever the season.

According to the designers, "the bubble façade will not be a static façade, it will oscillate with the wind and will interact with its inhabitants: the inflatables will be in full tensile capacity when many people are working and the ventilation is at its maximum. When no people are in the room the sensor will switch the ventilation down to its minimum and the facade will become almost deflated." The site, located near one of Shanghai's most popular sculptural parks, the "building can perform as a large scale interactive sculpture itself" with both day and night strategies to help it engage with the surrounding city. 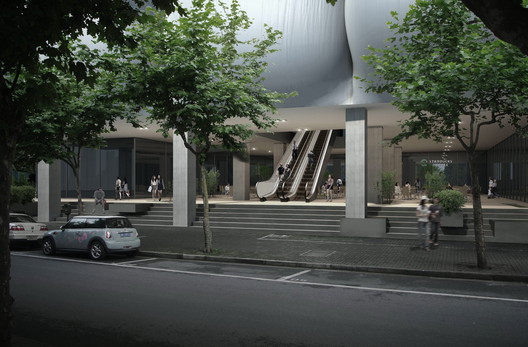