The Getty’s Pacific Standard Time Presents: Modern Architecture in L.A. hosted A. Quincy Jones: Building for Better Living at UCLA’s Hammer Museum and Contemporary Architecture from Southern California (formerly known as A New Sculpturalism) at MOCA Geffen for the better part of this summer. These two exhibits, on view until September 8 and 16 respectively, give us insight into Los Angeles’ past and present architectural legacies. They take on fundamentally different challenges. One uncovers a prolific and primary history of a modernist architect, the other attempts to capture and catalogue an unwieldy and unstable present.

Read on after the break for reviews of both exhibitions... 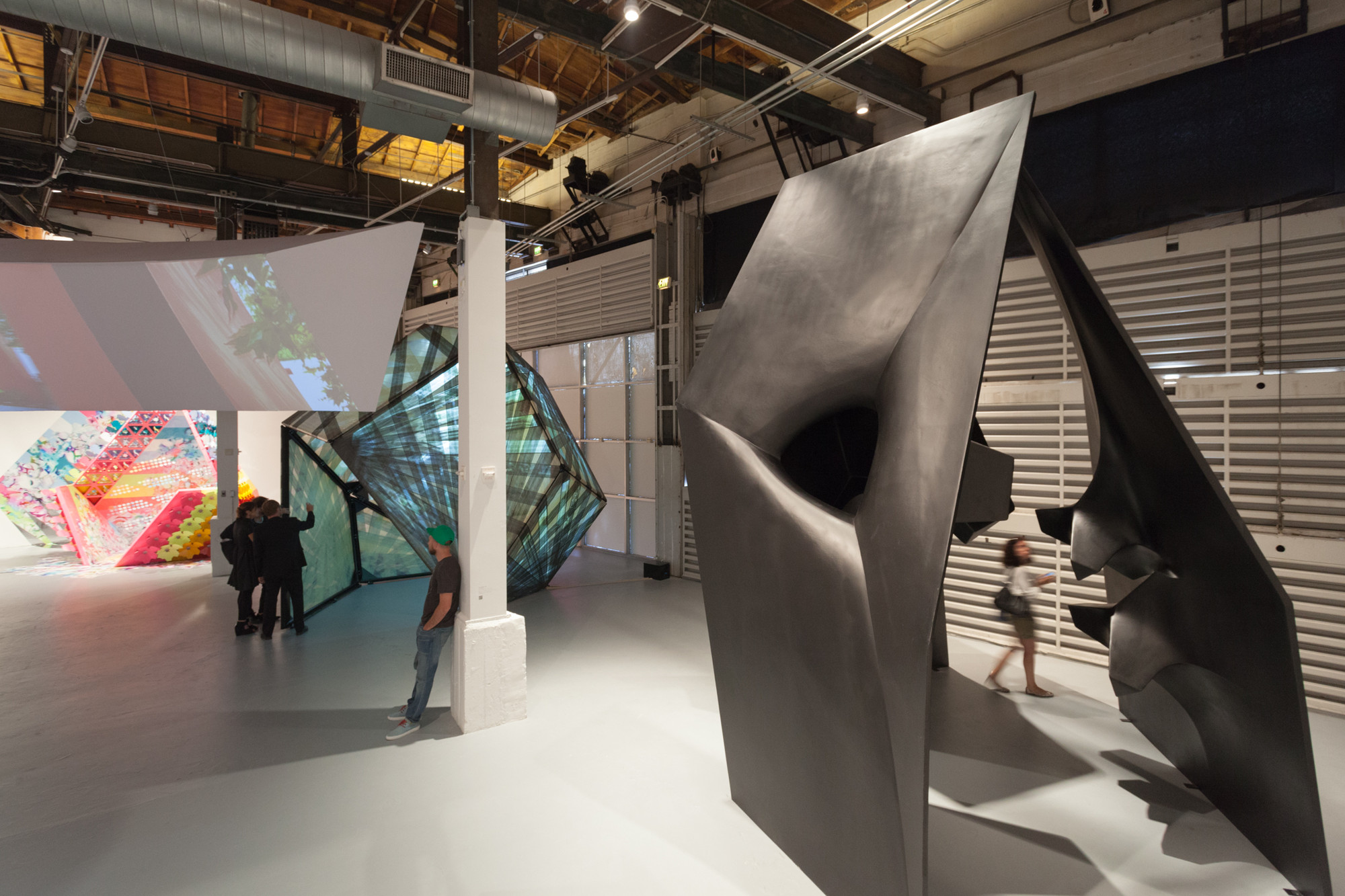 A. Quincy Jones: Building for Better Living is a post-war boom story. Jones was born in 1913, was discharged from the Navy in 1945 and was already winning accolades for his buildings by 1950. According to Ellen Donnelly, a curatorial fellow working on the exhibit, the archives of A. Quincy Jones are so prolific that in six months the team was only able to sort through anywhere from 25% - 40% of the collection in preparation for the exhibit. However, the show does not display this struggle. Curators Jennifer Dunlop-Fletcher and Brooke Hodge weave a ‘feel-good’ narrative, distilling Jones’ more than 5,000 built works into a digestible play of greatest hits. It is a celebratory show with an unassuming yet easily heroic protagonist.

The collaborative nature of Jones’ success is well highlighted. His career relied on partnerships with builders and developers such as Joseph Eichler. One advertisement for Eichler homes in Sunnyvale captures the mood by saying, “Here it is! The home they all promised…”. This slightly naive belief in progress is a tone that echoed throughout the show as a singular viewpoint. The exhibition could be strengthened by a peripheral vision look at Jones’ contemporaries including Charles (b. 1907) and Ray (b. 1912) Eames, John Lautner (b. 1911), Philip Johnson (b. 1906) and Eero Saarinen (b. 1910) among others. In the context of his peers, who steadily brought their own versions of modernism to life, the prolific career of Jones becomes less of a sales pitch, and more of a unique anomaly. However, anything left desired by the audience borders on greed given the artifacts presented and scholarship surrounding them.

Conveniently, the thematics of Jones’ career have mainstream implications. Carefully chosen and displayed models, drawings and renderings evoke, for architecture enthusiasts, a nostalgia for a precious bygone era of the field. Meanwhile, the public at large connects with the message of quality housing and a California modern lifestyle for all. Near life-size photos and an array of multi-media seduce those not prone to reading plans and sections into an accelerated spatial understanding. This show is a successful consumer product, like many of Jones’ housing developments, and understands how to provide a ‘point of entry’ and a story to a variety of visitors. The Hammer provides exposure and clarity on an important life’s work that may otherwise have faded from history.

Contemporary Architecture from Southern California, on the other hand, takes on a moving target: the present. This is not merely the story of one architect’s linear narrative, but a snapshot of 38 local firms at various moments. It is worth mentioning, the majority of the show’s press surrounds the politics and pecking order of those involved, or not involved. Chris Mount curated the catalog and original vision for the show, however the exhibition was rescued by the foster care of Thom Mayne by the time it opened. With the final list of architects, it’s not only the inclusions, but also certain exclusions, which seem haphazard and given the history of the show, futile to dwell on.

This exhibition brings to light the question of the architect’s shifting engagement with museums. Instead of aspiring to design the museum, as I imagine Jones would have, the architect today is acutely aware that they may also strive to be exhibited in the museum. This possibility gives a place to that magical, sometimes experimental, often fetishized, artistic residue of designing a building. It allows us to display the Art of making Architecture.

The most compelling pieces in the show expose this gestation period, or preparatory period, as the text from the show calls it. The matrices of sketches by Michael Rotondi and Neil Denari uncover the thoughts of the architect like a storyboard. Read one frame at a time, they aggregate into masterpiece. There are model + drawing hybrids from Coy Howard and Thom Mayne among others, that explore form-making, siting, texture and approach. The other worldly representations of autonomous buildings by a young Michele Saee are startlingly beautiful. And the Wes Jones UCLA cogeneration studies are graphic representations of an architecture fighting against itself as though plagued with an autoimmune disease, creating a palpable energy of tension and struggle on the page.

These preparatory artifacts unfortunately do not belong in the same show as traditional representations of finished architecture, or in the confines of the layout categories of ‘commercial’, ‘single family’ and ‘multi-family’ typologies. Separating each architect’s body of work into irrelevant categories and sprinkling them across the space tragically homogenizes the work into a sea of ‘whitewashed’, ‘distressed’ and ‘sport-utility’ model and drawing fashions from the ‘90s and 00’s. The exceptions, Greg Lynn’s table of trials and Frank Gehry’s room unto himself, carry an impact and voice that proves the strength of authorship.

The pavilions by Atelier Manferdini, P-A-T-T-E-R-N-S and Tom Wiscombe Design are the one category that feels at home in this show. All three projects are not finished building designs, but are compelling studies that provide a glimpse into the future. The embrace of color, be it the matte absence of color in Wiscombe’s design or the psychedelic saturation of color in Manferdini’s design, set them apart from their peers and solidify that there really is something exciting brewing in Southern California.

In the end, Contemporary Architecture from Southern California rhymes with the city of LA in an uncanny way. It is a collection of disparate pieces urbanistically tied together, yet operating autonomously. LA is not an obvious city or a facade city, but it slowly reveals itself with patience and time. Perhaps in time, the lessons of this show will be revealed.

The clear narrative and level of interpretation displayed in the curation at A Quincy Jones: Building for Better Living serves as a lesson to the MOCA. However, we are no longer living in a world where architecture is practiced as Jones once did. The architects of today, and let’s call them artists too, make the A Quincy Jones approach to architecture look as simplistic and naive as famed TV architect Greg Brady. The MOCA show was an opportunity to redefine all that architecture is currently capable of. Instead, the show proved that our structures of thought today are so complex and contradictory, we don’t know how to capture and catalogue them. The contemporary work from Southern California is one step ahead of us all.

Michelle Paul is a designer and architecture critic who has taught at Yale, SCI-Arc and Woodbury University and written for Wired and Urban Omnibus. She currently teaches at Pasadena City College.