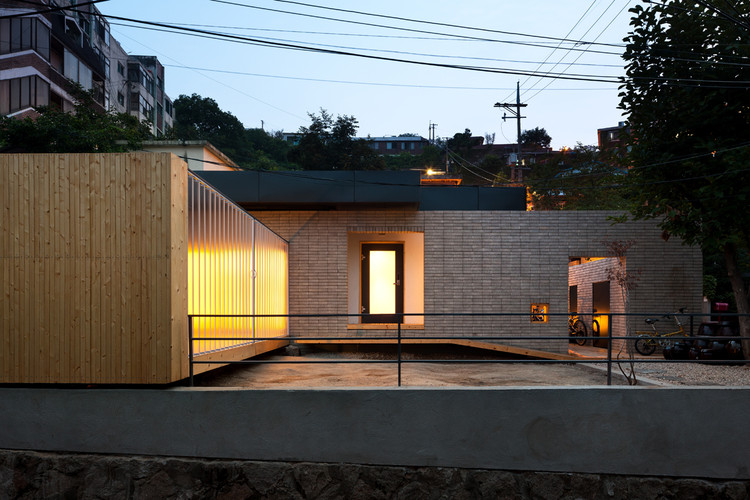 Text description provided by the architects. From the old Korean residential zone, it is difficult to find one-story house. But even 42 years ago since this building has been built, there were a lot of one-story house. However, four-story apartment houses, which are also called as 'multiplex housing' or 'multiple dwelling' occupy most of residential zone. This is because people removed old houses and extended dimensions and then built new houses to make more profits from rent. Therefore the old houses are often surrounded by higher buildings. To solve this problem, new buildings could be constructed instead of old houses. However, then they will be disturbed by higher buildings around them. As a result of this, villagers will file a civil complaint to administrative office with the reasons of the prospect right and right sunshine are limited and village becomes stuffy. Therefore building new houses in the old residential zone in these days is more disadvantageous than people who have already built before. This house was that case.

However, Jip-Soori(Korean term for revitalization of house) of old houses is never easy. The first reason for this is because of the word ‘being old’. If a house does not stand for up to 42 years, it would be difficult for people to understand. But when think of the time when a lot of new buildings had been built in a short period of time because of the society-economic situation and population concentration phenomenon, it is understandable then.

At that period, it happened more often that the more soils from the ground were used when make bricks rather than using cements or sands. As a result of this, the bricks which were used when built the houses in the past, were not strong enough. However, it was absolutely amazing that this house (That kind of bricks written above, were used ) had not crumbled for 42 years.

But this house was this case

Before this house had been built, 42 years ago, living parents, husband and wife and their children together was normal life in Korea. But now it is not. Even though they wish to live all together like before, there is one thing that disturbs their wish. This is because of the structure of apartments located in Korea. Then I want to ask what if 3 generations have to live in the same house or they want to? For example if granddaughter, year in 9 who likes playing computer more than reading books and her little brother who always plays and runs around house, and grandfather who prefers ‘Yeo-gang’ more than modern toilet and loves gardening and poultry farming, have to renovate the '42 years old house' and live there all together after living separately for a long time. But this house was that case.