Text description provided by the architects. The idea of designing a project in the south lead us to imagine the great roofs of the Colona warehouses. Made of rusted zinc, their strong presence builds a dialogue with the distant geography, with the ability to hold an image between the historic of our architectural heritage, and the beauty of a rugged terrain. Thus, this relationship sets a characteristic heritage landscape.

From the idea or capacity of these structures to make evident a new landscape, we considered as a first point (almost a bit rushed), a project that could embody this responsibility from afar, avoiding an obvious conformation of home, hotel, or warehouse. We got closer to the contemporary idea of a clearly horizontal artifact. A black roof long enough to suggest a dialogue with the distant geography, a new profile, which as a plinth, would support the image of three volcanoes.

The plot has two clear qualities: first, an esplanade by which to access the site 300 meters long by 25 meters wide. Second, a steep slope descending to the east, where the plot broadens to the south for about 80 meters. The predominant views are to the east: Panguipulli Lake and three volcanoes: Villarica, Quetrupillán, and Lanín.

We are asked to design a seven-room hotel including a public restaurant, 700 square meters total.

We decide to leave the 300 meter esplanade as a park, parking area and access. We locate the building 4 meters below the top of the slope, laid out horizontally, occupying the width of the plot with the length of the building.

Placing the building on the slope allowed us, first, to overlook a long horizontal pre-painted black zinc roof from the access, which due to its relationship with the land, hides the back facade. Thus, the entire morphology of the building is not displayed. A roof surface is perhaps strange because it sets the landscape as protagonist. Second, it allowed us to enter the building underground, in search of a controlled display of the interiors.

Once inside, a strong access gesture (which we would consider exaggerated), breaks the tranquility of the figure looking for the farthest view of Lanín volcano. Inside, we wanted to display a vertical, hierarchical view of the landscape, and also a double height space for the dining hall.

In the public areas, the building is supported on metal columns, elevated over the slope.

The bedroom area is understood as a rather long circulation, which goes from the public to the private, seeking views to the west, between the building and the slope of the ground, in a more intimate relationship with the landscape. The circulation ends at a terrace with a fireplace and a pool, where the views open towards the Choshuenco volcano.

The rotation of the bedrooms on the site looks for a perpendicular relationship with the lake and Villarica volcano, at the same time generating a small hall for each room, hiding the doors from view from the public area.

Finally, suspending the bedroom volume over the sloping terrain allows for privacy in the bedrooms and the views. The balcony condition of the building over the slope is clear from the private core. 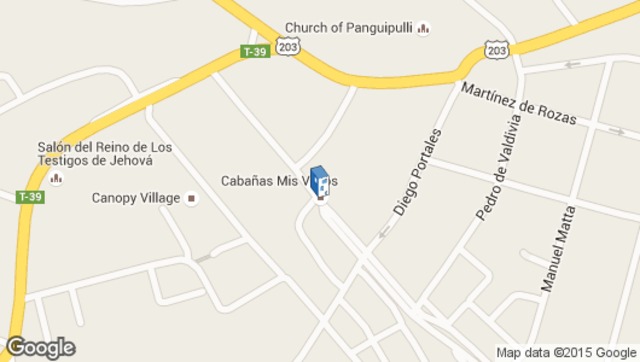