Gehry Partners have just released their highly anticipated proposal for the National Art Museum of China (NAMOC) in Beijing. Though rumors from last year reported Frank Gehry and Jean Nouvel as the competition’s top contenders, with Nouvel taking the lead, a winner has yet to be confirmed.

Gehry’s design, which is intended to promote cross cultural understanding and appreciation for Chinese contemporary art, aims at setting a new standard for 21st century Chinese architecture. Perhaps the most defining element of the design is the “translucent stone” facade, a new type of glass developed by Gehry Partners that is said to have the qualities of jade.

More images and the architect’s description after the break...

NAMOC will form the centerpiece of a new cultural district in Beijing. Located to the north of the city center in the Olympic Park, the district will be comprised of four museums. NAMOC will occupy the most important site facing the central axis of the Olympic Park. The primary goal of the competition brief was to create a design that addresses the concept of a 21st century Chinese architecture. We created a design that is uniquely tailored to China and its rich cultural history, evoking historical models without copying them, to create an innovative building unlike anything else in the world.

Throughout our projects we have been looking for a way to express movement with inert materials like the Greeks did with the horses and soldiers in the Elgin marbles and like the Indian Shiva dancing figures. Our effort to express subtle movement in the façade is what leads us to studying glass.

The façade is clad with a new material developed by Gehry Partners – translucent stone.  Evocative of the most precious Chinese materials, it has the qualities of jade. Of all the materials we explored, we found glass to be the most transcendent and symbolic of Chinese landscape paintings, of moving water, of the mountains covered in mist.  It has gravitas that creates an emotional impact on visitors.  It gives the building a stately and noble appearance, appropriate for a national museum.

The translucent stone is part of the innovative sustainable façade concept that incorporates a ventilated airspace to reduce the heating and cooling loads of the building.  In addition, the airspace is used to display art banners and projections, which provides the ability for the building’s façade to change and remain current far into the future, even becoming a canvas for artist projects.

The building’s entries and interiors have been organized to accommodate an unprecedented number of patrons expected to visit the museum. The building has been designed to efficiently and comfortably accommodate 38,400 visitors per day and approximately 12 million visitors per year, enabling NAMOC to have the highest attendance of any museum in the world.

Four distributed entries at each corner of the building facilitate the processing of a large number of visitors, and minimize any queuing of visitors.  Each of the four entries is connected to one of four escalators systems that provide fast and efficient distribution of visitors to all parts of the museums.  A ceremonial entrance is placed in the center of the west façade, facing the Olympic Park. The articulation of this entrance evokes the silhouette of a Chinese temple.

The building interiors are organized around a series of large public spaces, connected vertically by escalators. These spaces are inspired by pagoda and temple forms- rendered as occupiable voids; the shapes are only legible from the inside. The public spaces provide an orienting device for visitors to easily navigate the large museum, and establish a formal continuity between the shapes of the building façade and the interior of the museum. In addition to providing access to galleries, the public spaces provide opportunities for large scale art exhibit spaces and events.

The organization of the galleries was developed through discussions with NAMOC.  Sixty percent of the galleries are dedicated to the permanent collections of 20th century Chinese art, Chinese calligraphy, Chinese folk art, and international art.  The permanent collection is housed on the second, third, and fourth floors in gallery types to align with the requirements of the art.  The ground floor, fifth floor, and roof top galleries are dedicated to changing contemporary art exhibitions.  They are taller in height and have a greater variety of shape and scale.

The museum includes a full complement of supporting functions.  An art academy, an art research and conservation institute, five auditoriums, retail stores, restaurants and cafes, and large art storage areas have been incorporated into the design of the museum.

The design for the museum was developed with an integrated sustainability concept.  The design is based on a high comfort-low impact strategy that includes concepts for load reduction, system optimization, and renewable resource substitution.

The calculated impact of the integrated sustainability concept is a 57% reduction in energy use and carbon emissions over a standard museum, the equivalent of 275 Beijing households.

Gehry Partners developed a larger landscape and master plan design for the museum’s surrounding areas to link with master plan for the cultural district.  A revitalized waterfront park to the west provides new public open spaces and ground level retail areas, and a visual foreground to the museum as viewed from the main axis of the Olympic Park.  A connection to the subway is provided at the first level below grade that links directly to the museum.  A new park to the east of the museum offers additional public open space and sculpture gardens as an extension of the museum.  The roof of the museum has a public garden that allows visitors views to the Olympic Park beyond, and provides a key fifth elevation to the museum when viewed from above. 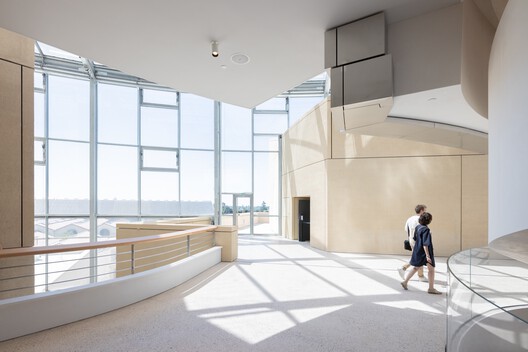