UPDATE: OMA has released new images of the Norra Tornen project (previously named “Tors Torn”), as the close-to 300 apartments planned for the residential towers have been put on the market. The ground-breaking of the Stockholm towers is currently set for May 2015.

OMA has won the design competition for Tors Torn in Stockholm, beating out four competing practices for the opportunity to build the third tallest twin skyscrapers in Sweden.

Existing urban guidelines call for a gateway to the new Hagastaden area of Stockholm, and OMA’s proposal accommodates a mixed-use program with a set of “rough-skinned” towers. The protrusions and inversions at different heights produce an alternating pattern of indoor living spaces and protruding outdoor spaces. OMA explains that their design “challenges the expected uniformity and homogenous façade treatment that is often assigned to tower structures. Instead, it extends the skin to expose the individuality of the separate living units in the two blocks - a true vertical, urban agglomeration."

More on OMA’s winning proposal after the break… 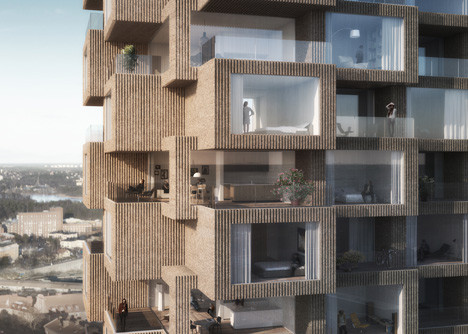 Reinier de Graaf, who is leading the project with OMA Associate Alex de Jong, commented: "We are delighted to have won the competition and - together with Oscar Properties - to build the Tors Torn residential towers. The 100 meter high towers define the new neighborhood Hagastaden as an integral part of the growing city center of Stockholm. The informal appearance of the towers will express domesticity, perhaps even humanism."

According to the press release, “In addition to private residential apartments, Tors Torn will also contain a diverse public program for the wider community of Hagastaden, an ongoing urban development project aiming to extend the downtown area of Stockholm. A bar and exhibition space will occupy the upper floors of one tower, with the ground floors of both towers accommodating a health club, library, children's center and retail areas.”

The project is scheduled to break ground in 2015. In 2010 OMA won another competition for a mixed-use tower project in Stockholm—Station City.