Save
UCSD: A Built History of Modernism
Share
Or
Copy 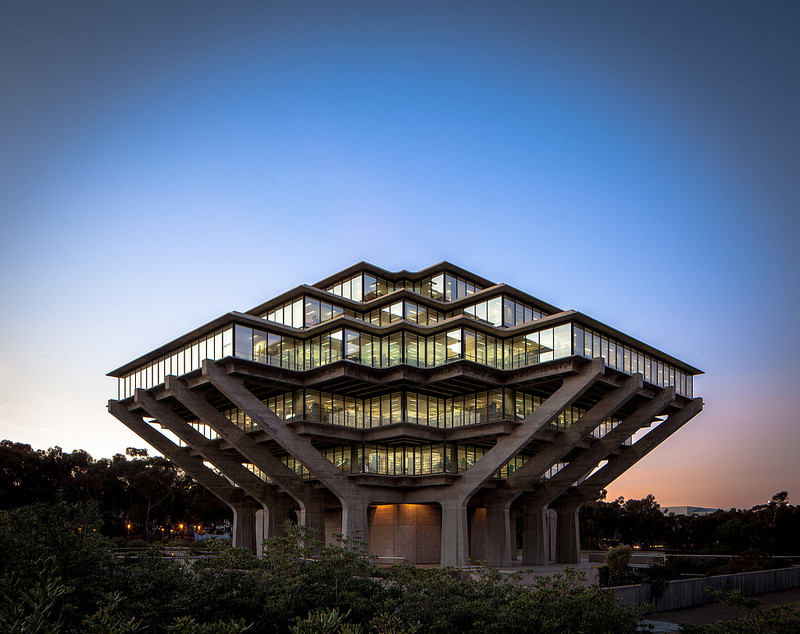 UCSD has its roots in the 1950s, when the City of San Diego offered a large section of land to the University of California. The new campus was positioned to include the Scripps Institution of Oceanography, which had occupied a site on the coast since the early 20th century. What is now known as the Old Scripps Building was designed by Irving Gill in 1910; even at this early time, Gill had eschewed historical styles and his concrete design set the tone for the approach occupied by the new campus 50 years later.

The original master plan for the campus was designed by Robert Alexander. It consisted of 12 colleges, each with a distinct architectural character, joined by a grand pedestrian boulevard inspired by the Champs-Élysées in Paris. The plan was heroic in its ambition: the focal point of this grand boulevard would be a huge plaza "rivaling the Piazza San Marco", and a 6000-seat amphitheatre with a 360-foot bell tower at its center. A library "as compelling as a Mayan Pyramid" would complete the ensemble.

Alexander oversaw the construction of Revelle College, the first of the 12 planned colleges, as well as the medical school and a number of standalone facilities such as the Gymnasium, with its delicate folded roof and the deceptively simple glass Natatorium. Revelle College is particularly notable for adopting the approach of the overall master plan, designed with strong forms and a large plaza at the center of the college.

In order to encourage the different architectural character called for in the master plan, the university hired architect Robert Mosher to design the second college, and got more than they bargained for. A disciple of Frank Lloyd Wright, Mosher believed in humanistic design and was worried about the excessive scale of Alexander's plan, likening it to the totalitarian architecture of the Nazis - entirely inappropriate for the progressive liberalism that characterized the student population of the 1960s. Mosher convinced the university's administrators to ultimately abandon Robert Alexander's plan, then designing Muir College, a more intimate collection of buildings than Revelle College.

At around the same time, the university hired William Pereira to design the main library, who disagreed with Alexander's plan to situate the library at the edge of the campus, and convinced the university that a site at the center of the campus would be better. Reacting to these betrayals of his vision, Alexander resigned from his post as consulting architect - but if nothing else, he got his wish for a library "as compelling as a Mayan Pyramid". The remarkable Geisel Library (named after Theodore 'Dr Seuss' Geisel) is the focal point of the campus and the star of this architectural show.

Since its rapid expansion in the 1960s and early 70s, construction at UCSD has slowed down a little, but now with six colleges and a much expanded student village near its center, there are still plenty of architectural gems to be seen, such as Moshe Safdie's designs for Eleanor Roosevelt College (2003), the Price Center East by Yazdani Studio, and the Housing & Dining Services Administration Building by Studio E Architects.

Check out the gallery to see the impressive collection of buildings at UCSD.