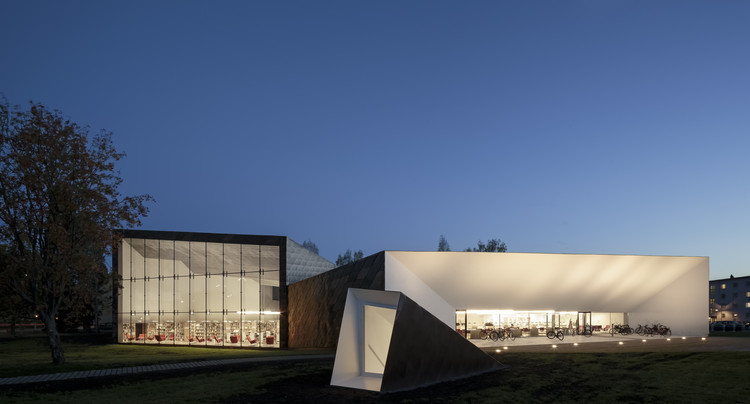 Text description provided by the architects. The civic centre of Seinäjoki is a uniform building complex designed by Alvar Aalto. The building complex showcases Aalto’s exquisite touch from the details of door handles to the scale of urban planning. The centre is a masterpiece of modern architecture and a highly valuable cultural environment. The library was completed as part of the civic centre in 1965. An example of Aalto’s famous series of library designs, it served well as the town’s main library for over four decades. With the expansion of the town and evolution of library activities, however, it was no longer able to meet today’s demands. As a solution, the town decided to co-locate a modern building with the current library, so that the resulting two buildings would merge into a single functional complex. An architectural competition was organised for its design in 2008, in which the winning entry was our proposal titled ”Apila” (”Clover”).

The key point of reference for the new library design was its location in the valuable environment of the civic centre created by Aalto. The aim was to initiate a dialogue between the new and the old part. The new building must respect the protected cultural environment while making a bold statement as a piece of modern architecture – in other words, find the right balance between being conciliatory and challenging. The building’s design references the unique characteristics of Aalto’s architecture, however strictly avoiding direct quotations or imitation of themes.

Another important challenge for the designers was the changing content of library activities. The role of the library is undergoing a transformation as a result of the rapid social change and new modes of communication. Information is easily accessible through the Internet and other electronic media. It is thus conceivable that once looking for actual information no longer plays a central role, the significance of the library as a place for interacting with information will be highlighted. Its key mission is to provide a setting for encounters, meetings and events. Encouraging the users to be active, rather than passively receiving information and services, is also important. In other words, the library has to be a versatile, flexible and adaptable public space. To attract visitors, a well-functioning library must provide experiences. In Seinäjoki, particular attention was focused on the collections for children and young people, which were developed from the perspective of the younger user groups.

Dividing the new building into three sculpture-like sections was an important insight that helped to reconcile its large volume with the scale of the civic centre. The building thus relates to its surroundings, and a different statuesque aspect of it is revealed from each direction. On the other hand, the new building discreetly keeps its distance from the outlines and materials of the old civic centre. With liberal generosity, it was placed in the middle of lawns, as though a building in a park. The dark copper of the facades stands out from the whiteness of the surrounding Aalto buildings, the contrast helping to detach the new from the old. A distinctive copper cladding material was designed for the facades that gives the building a unique lively texture.

At the core of the new building’s interior design is a large central reading terrace, a venue for events and a place for spending time, which leads the visitor to the collections downstairs and, through a subterranean passage, to the old library. The terrace underlines two important themes of the interior: the significance of providing a place for encounters, and a functional link between the new and the old building. The gradually descending, interlinked spaces are a connection with the sunken areas typical of libraries designed by Aalto – the purpose of which was to give visitors an unobstructed view over the bookcases. The overall form also has distant echoes of the fan-shaped library main halls designed by Aalto and the central location of the customer service desk. The multifarious interior spaces merge into each other in an open plan, opening up carefully designed views. The view through the large window of the high main hall is dominated by local landmarks: the clock tower of Lakeuden Risti church and the fan-shaped facade of the old library. From the main entrance and the newspaper reading room, visitors can see a section of the civic centre plaza past the theatre. The new and the old library are thus opposites in their relation to the environment surrounding them – with its emphasis on indirect natural light, the windows of the library designed by Aalto offer limited views of the outside.

The building comprises a cast-in-place concrete structure that lent itself to the sculpture-like design. The panoramic, unobstructed views across the interiors were achieved by using challenging long-span beams similar to those used in bridge structures. The visual look is dominated by cast concrete surfaces aiming for an unfussy, rough feel produced by using uneven plank moulds and by leaving the surfaces unfinished after casting. Building maintenance technology was integrated in architectural solutions, meaning that the vaulted ceilings and other internal surfaces could be kept free of technical installations.

The perspective of sustainable development was taken into account in the design solutions. The high-quality building materials have a long life span. The compact overall shape, good thermal insulation values of the shell and air conditioning system with heat recovery guarantee that the building has a high energy efficiency value. In order to minimise the need for cooling, all large windows face north, minimising thermal loading from the sun.

The civic centre of Seinäjoki is an integral part of the townscape that did not require infill development. However, the expansion of the library sparked by functional needs now comprises a visible new element in the town. Rather than disturb the discreet architectural balance of the area, the design of the new building wishes to be experienced as an interesting new layer. In any case, the services of the renewed library now attract new visitors and vibrancy into the area – to the benefit of the entire urban centre. 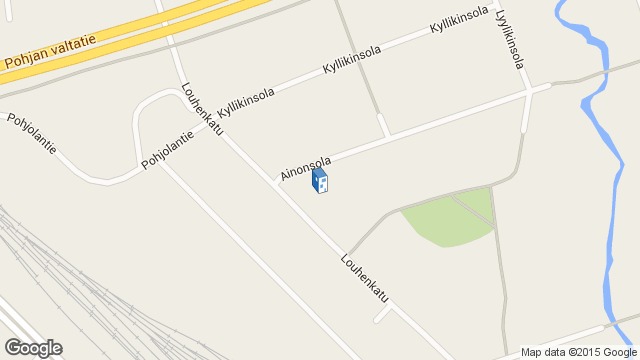 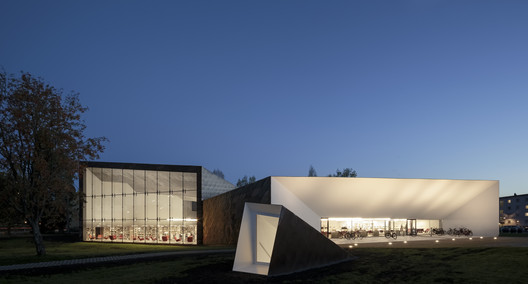