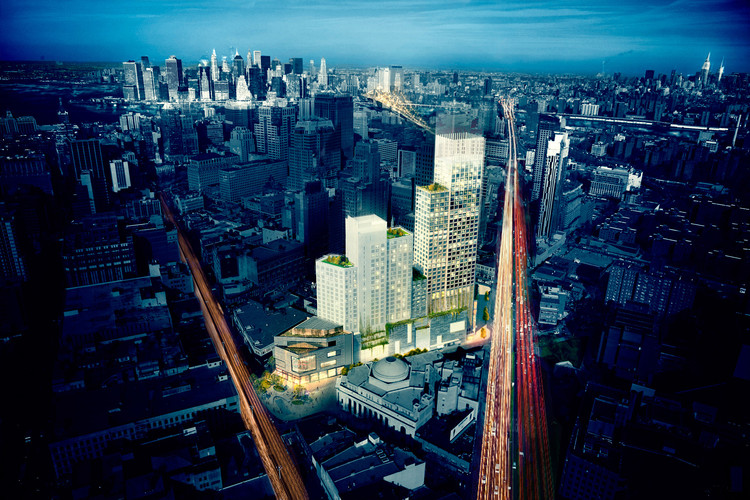 City Point is a proposed 1.8 million square foot, multi-phase, mixed-use development designed by New York-based practice COOKFOX for the center of the rapidly transforming Downtown Brooklyn. The project will create an iconic presence by acting as a cornerstone for the Brooklyn skyline and establishing a critical mass of new growth. The three distinct phases of City Point encompass retail space, affordable and market-rate housing, office space and a market hall, which together create a strong base for growth and integration in the core of Brooklyn. City Point will foster a multi-use urban environment, connect subway commuters with green spaces, and create a vibrant heart in the downtown area.

With a nod to the vibrancy and context of Downtown Brooklyn, the design of One Dekalb is heavily influenced by Albee Square, the historic Dime Savings Bank, and adjacent buildings. Anchored on Albee Square along Fulton mall, One Dekalb’s dynamic geometry effectively engages the public plaza while deferring to the adjacent landmarked 1908 Dime Savings Bank. In addition to maintaining sightlines to the bank, the building responds to this marble-clad landmark with white and pale gray terra cotta cladding. Along Fleet Street, the distinctive architecture of the Dime Savings Bank is framed by a double-height display window. The horizontal ribs of the terra cotta are varied in tone and texture, adding depth to the façade in a way that plays off the context of Albee Square and the Fulton Mall.

Also part of Phase 1, Dekalb Market is an interim use housed in a collection of salvaged shipping containers and is located on a portion of the site that will be used for future phases of City Point. This open-air market, urban farming demonstration and event space brings together Brooklyn’s creative entrepreneurs in a vibrant community setting and activates what would otherwise be an empty lot - establishing City Point as a destination before the development is complete.

Phase 2 of City Point, which began construction in March 2012, will encompass a 225,000 GSF affordable housing tower at Fleet Street, a 335,000 GSF market-rate housing tower at Flatbush Avenue, and 660,000 GSF of retail that will seamlessly connect to One Dekalb. Phase 2 also includes a permanent Market Hall that will provide fresh food to the community and showcase Brooklyn-based food purveyors.

Phase 3 will commence construction by June 2017, and will include approximately 600,000 SF of office and residential space at the northern portion of the development site. Located at Willoughby Street, this building will be the tallest component of City Point.

The project conceptually draws from the “Three Sisters” Native American method of planting corn, beans and squash together, which grow symbiotically to ensure a sustainable harvest. In this way, the diverse housing and retail programs will support each other to cultivate a lasting urban community at City Point.

The massing of City Point is intended to create three distinct residential towers, each massing resolving at the sidewalk and differentiating the residential program from the retail portions of the project. The areas between the residential towers will utilize terraces and green roofs to extend the green spaces of the adjacent newly-opened Albee Square Public Plaza and future 1.15-acre Willoughby Square Park into the built environment. Pedestrians will be able to connect to the Dekalb Avenue subway hub either through the Market Hall or along the tree-lined Willoughby Avenue, creating a more enjoyable commuting experience. Reinforcing the pedestrian environment as well as the importance of transit-oriented development, the project will help orient Downtown Brooklyn toward a sustainable, prosperous future.