Kengo Kuma has paired up with Studio d`Architettura Martino Pedrozzi to develop a two-phase addition to La Scuola Universitaria Professionale della Svizzera Italiana (SUPSI), an institute of higher-education in applied science located in the Italian-speaking region of Switzerland. The proposal intends to overcome an existing urban barrier of an expansive railway system to link the university to the city of Mendrisio, utilizing a "skywalk" as well as a large underpass. Because accessibility and movement are at the core of the building's design, the new addition is a fusion of infrastructure as well as artificial landscape.

More on the SUPSI after the break.

The essence of Kuma's SUPSI design is the ramp, sloping in two directions to form a zig-zag shape where the roofs of the inclines become inhabitable public spaces. These inclined planes were inspired by the layered stone composition of local building roofs, thereby embracing a reinterpretation of scale and building tradition.

There is a main green promenade and a block-long green wall that reinvents green, sustainable practices, paired with a building envelope made of alternating stone and aluminum panels determined by daylight orientation. Natural light is an important and attractive component of the design, with large windows that let in sun throughout the year and very high levels of thermal insulation to keep the building warm during harsh Swiss winters. Kuma and his team paid very close attention to sun exposure, temperature and views throughout the building, making adjustments where necessary to capitalize on the school's nuanced environment.

Many different outdoor spaces, some completely open while others more sheltered, are defined by the terrace and positioned to provide comfortable experiences in varying conditions. Open to circulation, these spaces also accommodate university programs, such as the on-campus kindergarten.

Classrooms and a cafeteria are located on the ground floor with laboratories situated across a covered outdoor area. The lab space is covered in glazing but can be opened to the outdoors in good weather, creating further dialogue between infrastructure and landscape.

The bridge linking the university to the other side of the rail track is located at the north end of the building, a continuation of the roof terrace that extends out into the city of Mendrisio. Kuma and his team designed the SUPSI to stand as an example of technological and urban ingenuity, showing the importance of designing for the existing urban fabric and its citizens. 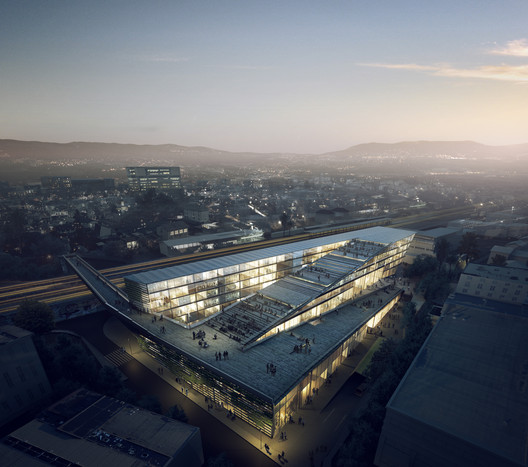