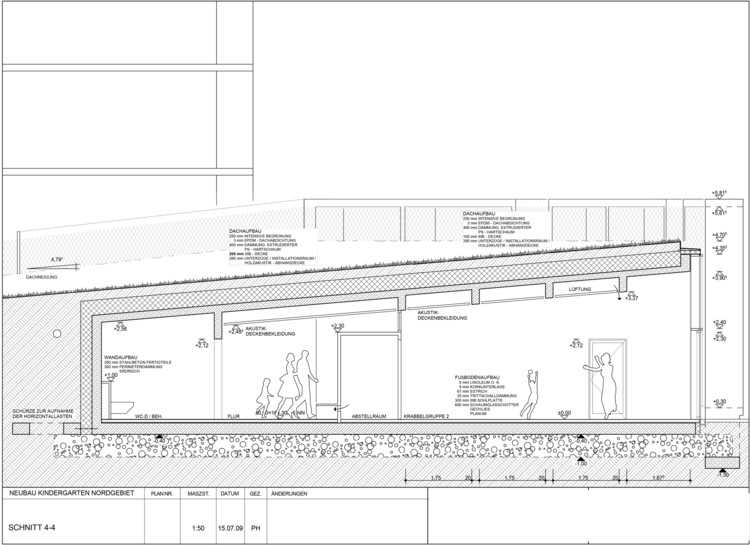 Situated between major municipalities in the town of Göttingen, Germany, is Despang Architekten’s model for progressive post-fossil construction within the higher educational setting. The Kita Kindergarten serves as a case study for the proactive approach to self-sufficiency and sustainability through careful attention to both energy efficiency standards – Passive House – and long term planning towards net zero.

With offices in Dresden, Munich, Hannover and academic satellite platform in Honolulu, Hawaii (University of Hawaii Manoa), the team at Despang Architekten developed multiple strategies to address the various elements that enveloped the site, ranging from thermal performance to daylighting and optimal building orientation. Starting with the physical location and building performance functioning as a primary criteria, it was determined that full southern exposure was critical in achieving the necessary passive exposure to the sun in the winter. The north would need to be optimized with thermal insulation by way of tactically berming the landscape from grade as an integral roof element of the new building. Existing structures on both the east and west frame the access points into the building that are slowly revealed as the bermed roof rises to its full height.

In terms of space planning, the programming was tightly integrated early on into the design decision to utilize a sloping roof. The rear northern portions of the building with low height ceilings house the mechanical and restrooms. Primary circulation comprises the midway section of the fan shaped floor plan that is designed with built-in furniture and interior glazing between the main activity spaces. Effective daylighting by means of skylights in the ceilings of the hallways ensures more than adequate diffuse light during the day.  Located within the southernmost section of the building are multifunctional rooms, sleeping rooms, and staff and kitchen areas bordering the eastern elevation.

When it comes to designing for highly active uses such as kindergartens, longevity of construction and materiality play a major factor. When it came to deciding on the material palette, Despang Architekten employed a limited number of materials – precast concrete, spruce wood, and linoleum all untreated and left raw. Utilizing factory produced precast elements in the form of insulated sandwich panels for the exterior walls and thinner slabs for interior bearing elements ensured rapid assembly and better quality control. A limited amount of joints also aided in the rapid assembly – with only a few minor interior demising walls requiring infill construction components. As the concrete walls radiate from the centroid of the conical floor plan, their non-parallel orientation in combination with ceiling mounted wood diffusers lends itself to enhanced acoustical properties typically not associated with predominantly concrete construction. In action, the honesty of materiality provides a clean canvas for which the kids can pin up drawings and artwork which juxtaposes the subdued colors of the concrete and linoleum flooring.

In order to relieve the building of its dependence on fossil fuels, the energy saving tactics employed are extensive and robust, starting with the orientation of the building to the south with a fully glazed façade to take advantage of solar gain during winter. The precast exterior walls feature 20cm of rigid insulation resulting in a U-Value of .12 W/m2K. Roof construction comprises a concrete structural slab built upon with 60cm of insulating glass foam gravel, and further enhanced through the addition of the earthen layer that supports the intensive green roof. High performance triple pane glazing is held in place with RAICO thermally broken mullions. In addition to providing high levels of insulation, air tightness plays a significant factor in the overall efficiency of the building envelope system as a whole. When tested with the blower door, the Kita Kindergarten came in at n50 = 0.43h-1, surpassing the Passive House standard of n50-1. Al-Ko Therm controlled air distribution in conjunction with a HRV achieves a heat recovery ratio of 80%. Although the spaces of the kindergarten are predominantly heated through passive solar gain, the system is provided with backup from the central campus heating and cooling plant. During the summer months, the air distribution system is operated during the night, bringing in cool summer air that flushes the interior and readies it for occupancy at a comfortable temperature the following morning. Accentuating the glazed southern façade and providing an additional element relating to solar optimization are 1 meter deep concrete frames that are thermally disconnected from the main building. Serving multiple functions, the lower portions function as seating at the base, guardrails at the top – for the open landscaped roof, and integral shading element for high angle summer sun. During the few days in summer when needed, rolling screen shades installed at the tops of the exterior concrete frames can be lowered while still providing views to the exterior from the interior.

Throughout the years the building continues to outperform the Passive House standard of 15kwh/m2 annually. The Kita Kindergarten at the Göttingen University campus stands as testament that energy efficient buildings need not be bland or stale, and through a holistic approach and attention to detail, the aesthetic, performative and humanistic qualities can cross contribute to a create better, healthier overall space to inhabit.