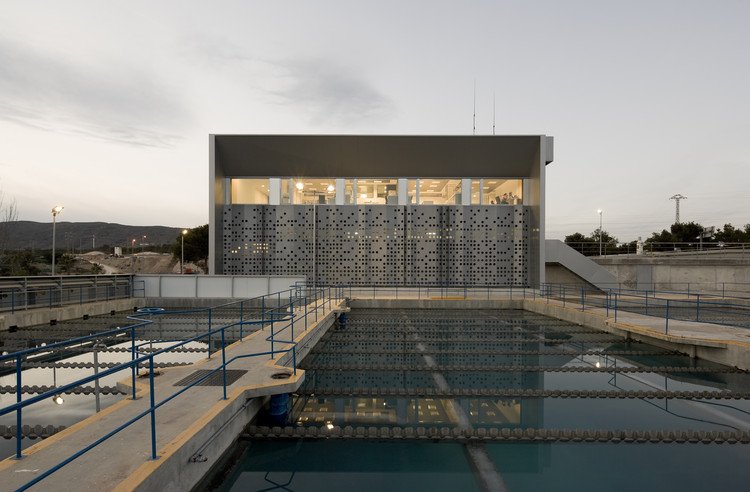 Text description provided by the architects. The proposal serves to influence demand received in the remodeling and updating the Water Treatment Station of Benidorm: first, to obtain a functional improvement of the buildings that make up the plant, completing the program established initially with changing rooms, toilets and other spaces in the control and management area, and, secondly, environmental integration and a specific improvement of the overall image of the complex built, marked by massive and industrial appearance.

The approach wants to meet the municipal technical requirements in the sense that those works should address not only the technical efficiency of the new facility, but also of its visual and environmental impact, given its significant presence and impact in the perceptual quality of the urban environment. The proposal has been defined along the course of the works, in an intense process of dialogue with the various stakeholders. In fact, the design is of a dedicated process-oriented discussion of alternatives at all times to the choice of the most appropriate operational and from all points of view.

The project has opted for a series of solutions that try to take care of solvency, efficiency and visual quality, economy and ease of incorporation into the course of execution of works without interfering with their departure. And includes two distinct types of actions related to the major ingredients of the problem: in the first instance, the control building redesign, with a review of its program of spaces and uses, and the outer envelope of the set consists of two volumes together with the adjacent, for operation and management, and, secondly, the mainstreaming of cladding elements, fencing and visual coverage of various elements of the installation, the full extent of the complex, the effect of attenuating its industrial image eventually neglected.

After considering various options, we review the heights leading to two plants left in the office building located on the deck plan deposits. This is the building that experiences an intense redesign, which starts with the review of the plant and the access elements and vertical communication. This was not affecting its supporting structure, whose construction has gone ahead in the work process. In fact, this was a major constraint. Moreover, we chose a panel enclosure surround tone metallic sheet, called to print the look of lightness volume, sophistication, elegance and modernity. It also works on the gaps and openings to the outside, or scenic spot, so if acting as lookouts on the entire system, with the eventual support of eaves and sun protection devices, sensitive to the orientations of facades.

With respect to the incorporation of other elements of cladding, fencing and visual coverage of the installations, no doubt had to start from a careful consideration of the entity whose volumes visual presence was to qualify. They came to be a huge mass of visual appearance rather clumsy and careless. And of course, it was necessary decisions appraise their eventual manipulation, given its inevitable extension and the resulting budgetary impact.

Priority issue to be considered was the longitudinal elevation of the architectural. It is understood, in any case, the need for economical solutions appropriate scale to the very special case, and, moreover, simple and accessible both from the conceptual point of view as according to their manufacture and assembly conditions, and their further maintenance requirements. Hence the choice of a simple and flexible system for modular coating, that part of a pattern that could be repeated on different surfaces with different heights and, depending on the coverage requirements related to quantities a 'plug' in each case. The base is a simple metal structure on a concrete foundation, such structure supports a steel sheet folded that is perforated with a pattern of circular holes dither major proportions provides a moderate degree of transparency. 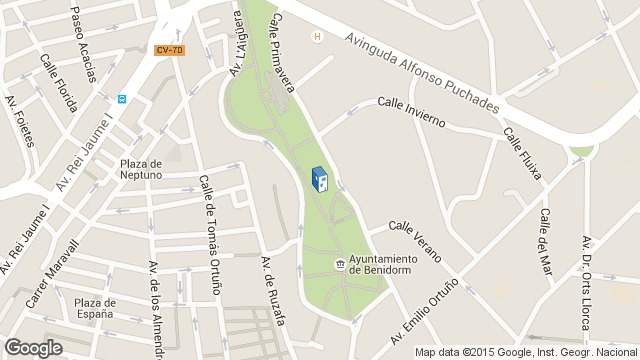