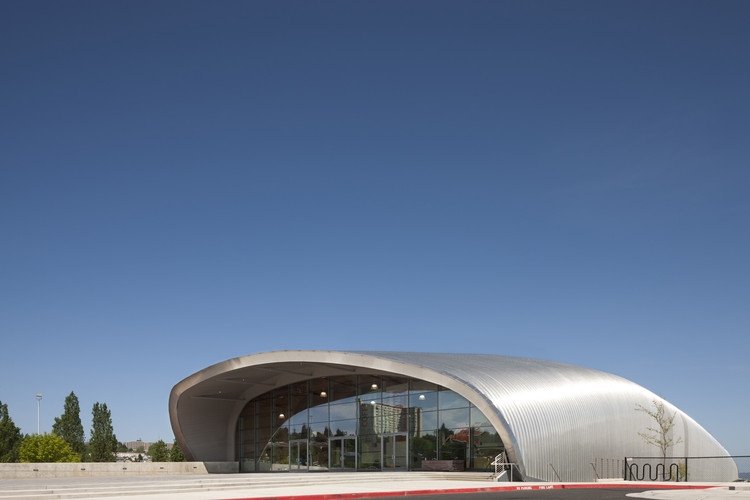 Text description provided by the architects. When entering the exhibit hall at the new LeMay Museum in Tacoma, Wash., visitors may find themselves gazing up at the ceiling as well as taking in the lines of gleaming classic cars. A soaring roof system made with curved glulam beams offers a striking sense of grandeur while simultaneously lending a warm, grounded aesthetic to the vast space. Nicknamed “America’s Car Museum,” the 165,000-square-foot facility was created to celebrate America’s love affair with the automobile. Across its 4-story, 9-acre campus, the museum will house up to 350 cars, trucks, and motorcycles from private owners, corporations, and the expansive Harold LeMay collection, from a 1906 Cadillac Model M to a 1965 Lotus racecar to a 1983 DeLorean DMC 12. Rotating exhibits, such as a collection of glass hood ornaments, also will be showcased.

Along with displaying some of the world’s most awe-inspiring vehicles, the museum will also serve as a gathering place for car enthusiasts, with meeting spaces, a membership club, a show field and a planned educational center. The museum’s main hall is essentially a long exhibit floor, almost warehouse-like, but aesthetically enhanced with its wood structure and thoughtful display details. Engineered by Western Wood Structures, the curved roof system was created with 19 glulam frames with 5-1/8-inch glulam purlins spaced 4 feet on center as secondary framing. The glulam beams, crafted by American Laminators, measure 8-¾ inches by 52-½ inches and arc 104 feet over the displays below. Because the roof curves in two directions, each of the 757 roof purlins is unique, with varying compound miter cuts and varying lengths; each purlin hanger has a different skew and slope. One-and-one-eighth-inch fully sanded plywood sheathing from Swanson Group Mfg. LLC covers the roof, with ½-inch and 5/8-inch sheets used around corners to meet the 1-1/8-inch thickness requirement while bending around the 17-foot radius of curvature.

Waterproof rigid insulation and a metal roof complete the structure.   The arch design—one of the largest wood moment frames in the world—has a 1-hour fire-resistive rating and follows the “Special Requirements for Seismic Design of Structural Glued Laminated Timber Arch Members and Their Connections in Three-Hinged Arch Systems” from the 2009 National Earthquake Hazards Reduction Program provisions. The provisions are intended to produce ductility in the arch systems by allowing the steel connections to yield plastically during a seismic event and prevent glulam members from failing in a brittle fashion.   At the south end of the structure, the roof system cantilevers over the last glulam arch, supporting the curved fascia and creating a covered outdoor gathering space.   The decision to use glulam beams wasn’t purely aesthetic, as it also was one of several features that allowed some of the cost savings necessary to meet a tight budget, says Alan Grant, co-director of Grant Price Architects in Los Angeles.

Grant says that construction of the LeMay museum cost about $104 psf whereas typical museums can range from $400 to $800 psf. From the outside, the effect of the curved, metal-topped roof is gleaming and streamlined—much like the aerodynamic surfaces of an automobile. The architects took great care to ensure the modern form and size still respected Tacoma’s largely historic architecture, standing out from the surrounding buildings, including the adjacent Tacoma Dome, without overpowering them. Inside, Grant remained conscious of the structure’s primary function—showcasing shiny automobiles—when considering materials. Flooring, for example, is dark stained concrete, much like the roadways automakers consider when designing a car’s shell for optimal visual effect.

Grant also paid close attention to lighting selection, noting how spot or strip fixtures at auto shows often leave bright spots and glare in photographs. The solution turned out to be simple and inexpensive: hanging fixtures that disperse 40 percent of the light up and 60 percent down, with a glowing fuse across the front, creating a strong, bright light that sets the space aglow.    The grand opening of the LeMay Museum June 2 capped off nearly a decade of effort by its founders, benefactors and construction teams. The resulting space is not only one to be aesthetically and structurally admired, but one that succeeds in providing a place for car lovers to witness history, share passions and preserve an American legacy. 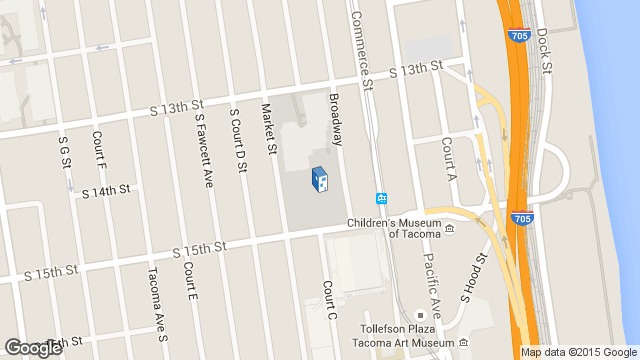