Save
Grimshaw Reveals Aviation Vision for London
Share
Or
Copy

Grimshaw Architects are the latest practice to add their voice to the debate surrounding the capacity problem of London’s airports. Their innovative proposal, entitled ‘London: Hub City’, bucks the trend of recent ‘superhub’ proposals, which are frequently suggested as a solution to the problem.

Instead of creating a large ‘airport hub’ on a single site separated from the city, Grimshaw’s design prioritizes construction of new express lines by creating a ‘City Hub’ that allows passengers to transfer between London’s existing airports via the city center. The benefit being that expansion could be spread amongst its four existing airports incrementally, as needed, instead of being concentrated on the construction of one ‘super-hub’.

More on Grimshaw's aviation proposal for London after the break.

By utilizing existing and planned improvements to the city’s infrastructure to enhance capacity, punctuality and reliability, Grimshaw believes that the airplane-to-city travel times could be reduced to 30 mins. This would place airplane-to-airplane transfers within the currently acceptable minimum of 1 hour.

Additionally, the design hopes to contribute cultural and economical benefits to London by making it easy for passengers to spend time between flights visiting the city, which would become tantamount to a transfer lounge. Citing London’s attractiveness to travelers, Grimshaw points out that over 30% of international passengers transferring through Heathrow already leave the airport and spend at least £500 per head in central London.

'London: City Hub’ is one of many recent suggestions on how to relieve the bulging capacity of London’s airports. Beckett Rankine have suggested constructing an offshore airport on reclaimed land near Kent. Meanwhile a group, including Foster + Partners, have proposed to consolidate air, rail, shipping and energy hubs at a single complex in the Thames estuary.

Whatever the solution airport capacity looks set to become an growing worldwide concern, with Dubai set to open a 160 million passenger terminal this year and Turkey recently announced its intention to build a new six-runway airport. 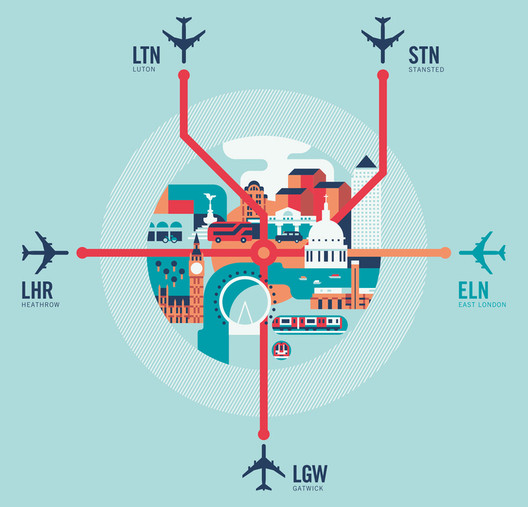