Save
Bulgari Pavilion / Not a Number Architects 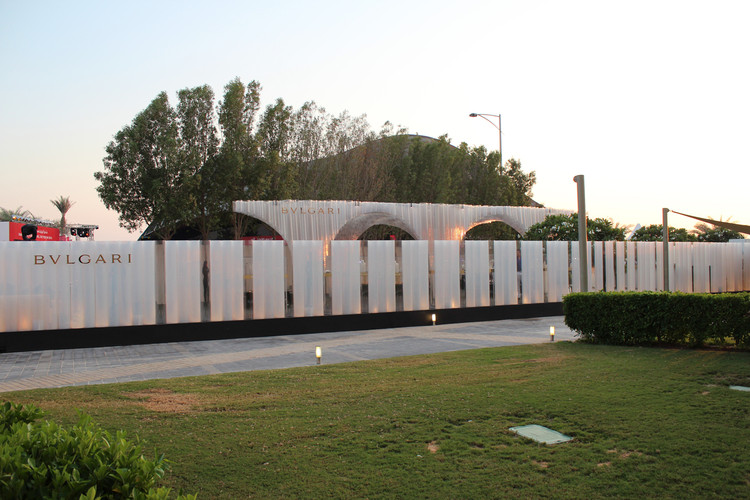 Text description provided by the architects. The Bulgari Pavilion, a temporary installation commissioned by prestigious luxury jewelry brand Bulgari, was designed by Not a Number Architects for the Abu Dhabi Art 2012 event held Saadiyat al Manarat, Abu Dhabi November 5-10. The architects were given a prominent outdoor space at the entrance of the event to create a lounge for VIPs and dignitaries of the art fair. Their design was conceived as an exclusive and private venue with live music, a bar, and a specially curated selection of Bulgari’s high-end jewelry. More images and architects’ description after the break.

Saadiyat Island will become home to Jean Nouvel’s new Louvre, Frank Gehry’s new Guggenheim and Foster and Partners’ Zayed National Museum, as such the focus upon architecture and design at this year’s art fair was significant with all three in attendance. Following on from Zaha Hadid’s Bulgari exhibition stand for Abu Dhabi Art 2011, Bulgari were keen to continue their patronage for innovative and creative design as well as encouraging young, emerging talent and commissioned NaNA to design a lounge with a breathtaking pavilion as its centerpiece.

The client’s brief was for the creation of space that was “audacious, unexpected, yet anchored in Bulgari’s heritage”. The site was approximately 300m2 and needed to include a bar, a stage, jewelry showcases and a VIP area with a capacity for the whole lounge of up to 150 people. Within the world of high jewelry, Bulgari is considered to be particularly innovative and progressive, especially in their use of technology and creative fabrication techniques. The project was required to be both representative of Bulgari’s style and its creative ideologies, whilst being emblematic of “modern mythology”.

The reappropriation of something mundane and transforming it into something magnificent became the starting point for our design concept. The design of the pavilion aimed to be both reminiscent of Bulgari’s Italian heritage whilst being representative of its own fabrication and structure. In this sense a certain brutal honesty was desired in the final outcome so that the form was a self-supporting entity in itself without the need for a separate internal structure; therefore the form was not merely a decorative veil. To achieve this however required careful consideration and analysis of both material and construction techniques.

After a period of extensive prototyping and experimenting a design based upon the packing of acrylic tubes was devised. Acrylic tubes are an “off-the-shelf” product that comes in set lengths and diameters. Although they have a diverse range of uses they are rarely used as principal architectural elements. By packing them close together not only do they begin to form mass but also provide structural rigidity. Much like the rough gemstone, the concept was to slice and cut, smooth and polish the form to result in new spaces and environmental conditions, to reinvent the material as something extraordinary and unique.

Whilst attempting to create a whole new spatial experience the team was also keen for it to simultaneously be something completely familiar, evocative of Bulgari’s heritage. In this way, it was decided to form arches, arcades, and cupolas through the excavation and sculpting. As well as being exposed and translucent this method provided a recognizable enclosure and intimacy all be it an ethereal sensation of it.

Continuing with the desire to create a holistic design, a bespoke connection technique was formulated using polycarbonate dowels secured with polycarbonate pins. This provides not only a quick and simple assembly method but also minimized the impact the connections had aesthetically unifying the design through a single material.

In total, the design consists of 2272 tubes with approximately 10,000 individual connections between them with a final weight of nearly 6 tones. In parallel, a team from Artisan (United Visual Artists) worked on the lighting design for the project. During the day the pavilion plays and manipulates the changing conditions of the sunlight however at night the aim was to provide an alternative experience in which the light flowed through the structure like water constantly hiding and revealing different parts of the pavilion. 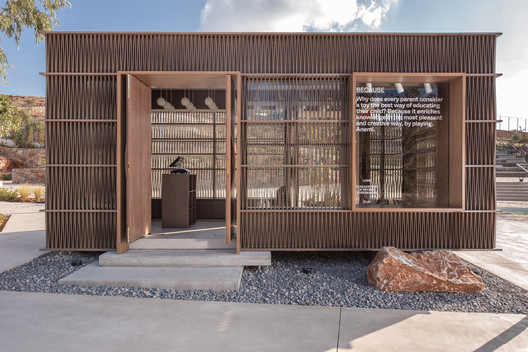 Not a Number Architects
Office
•••