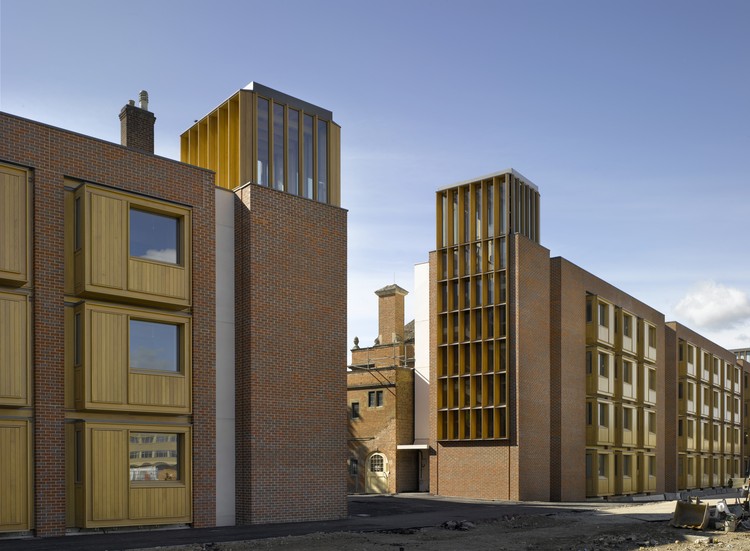 Text description provided by the architects. The University of Oxford is developing the Radcliffe Observatory Quarter on the site of the old Radcliffe Infirmary. The new development will contain faculty buildings for Humanities and Social Sciences. Somerville College occupies the whole southern boundary of the site. When the old hospital buildings were knocked down they exposed the north-facing flank wall to Somerville College. The proximity of older hospital buildings meant that the College had turned their buildings away from the Infirmary. An almost blank façade was exposed for the first time along the boundary of the site. The University exchanged land with the College to allow a long, narrow development along this edge. This allowed the College to build new student rooms and to re-orientate their grounds towards a major new centre for the University.

The parcel of land ceded by the University was just wide enough to allow one student room and a connecting passageway. The plot was 6m wide by 175m long. It was not possible to make individual entrances into the new building from the north. The student rooms will, over time, connect back into the existing buildings in Somerville College as the phased development of the project progresses. They will overlook a new laneway to the north, which connects Woodstock Road to Walton Street. One remarkable opportunity of this project was to make one whole side of a new street. We were also able to make a new northern entrance into Somerville College, linking their garden quadrangle to a long framed view of the Radcliffe Observatory.

The design of the street was conceived in the terms of Pevsner’s analysis of the picturesque, episodic setting of Queen’s Lane in Oxford. Building elements are used to frame and terminate short vistas. As you move along the street you reach small public squares at the end of each vista, from each square new vistas open up. This allowed us to interweave new and old buildings in a way that creates lots of small dramas as you move through the city.

The student rooms are articulated using projecting oak windows as a contemporary restatement of the themes of Sir Phillip Dowson’s Wolfson Building in Somerville College. The projecting bay was conceived as a response to a 1960’s Government Report on Student Loneliness. Each student has their own projection and way of identifying their place in the whole. The bay windows will also bring a liveliness to the extreme oblique views of the building, which you will get when you pass along the narrow laneway once it is complete. The stair towers close vistas and mark entrances. The deep oak fenestration is intended to create variety as you pass along the new laneway. From one view it is all glass, from another it is all timber reveals.

Construction:
A quick construction programme and the need to be sensitive to the quiet environment appropriate for study, indicated that prefabrication was the preferred construction methodology. Working closely with the contractor we devised a way of prefabricating the main structure, timber study windows, stair towers and used pods for the en-suite bathrooms. This ensured that the new accommodation blocks were delivered on time, to the highest quality and with minimal disruption to the college.

Sustainability:
The Somerville project was designed with sustainability and energy conservation as a key design driver. The approach adopted by the design team was one where the building demand was, in the first instance minimised, prior to the consideration of integrating additional LZC energy source, thus providing the most cost effective way in which carbon dioxide emission could be reduced.

Under floor heating was selected to operate at lower flow temperatures to take maximum advantage of bore holes sunk under the footprint of the building, connected to a 90kWt Ground Source Heat Pump (GSHP) installation. This provided of circa 35% of the peak heating load, reducing the building energy demand by almost 15%.

All of these measures helped resulted towards the new accommodation blocks gaining a ‘very good’ BREEAM status. 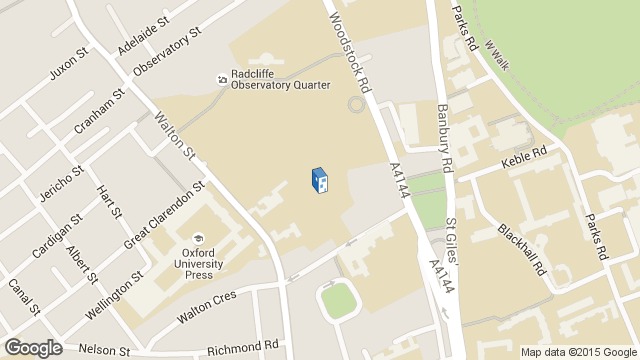 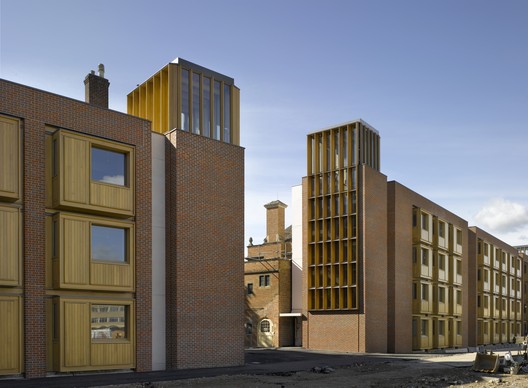