As Europe recovered from the death and destruction of World War II, countries got back to the business of rebuilding their communities and, of course, their churches. The need to make sense of the madness of the War was palpable - as was the need to express this modern-day spirituality in a form that broke from the past and embraced this new world.

The result was a bevy of European churches that - although often misunderstood by practitioners - represent some of our best-preserved examples of Modernist architecture. Photographer Fabrice Fouillet made it his mission to photograph these beauties in a series he calls "Corpus Christi." You can see the images - as well as Fouillet's description of the work - after the break... 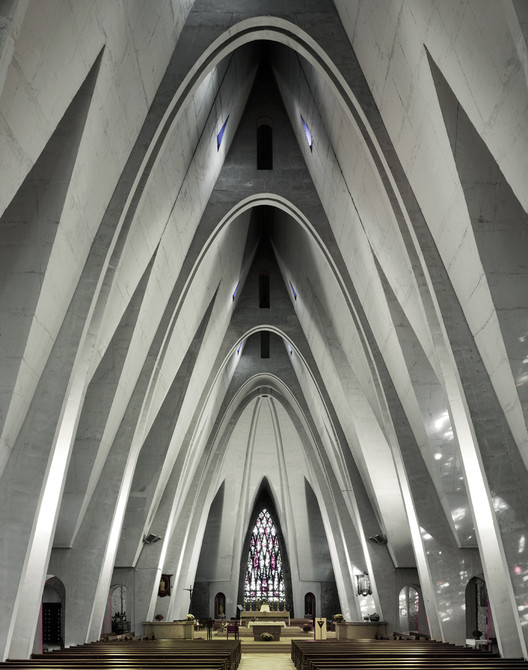 Corpus Christi highlights the architectural aesthetic of the new places of worship and their hymn to minimalism, which has represented a genuine creative inspiration in modern religious architecture.

Participating in a movement initiated in the 1920s and perpetuated by great architects such as Guillaume Gillet, Gottfried Böhn and Auguste Perret, most of these churches were built in the 1950-60s.

Scattered throughout Europe and the world, they reveal a new conception of the sacred, a representation of the divine imbued with modernity, thus triggering a debate and a rejection from some architects and members of the clergy.

I have chosen to capture this break with centuries of architectural tradition, the choice of materials; reinforced concrete, plastic, crystal, diffusion of diaphanous or bright light, and to draw the viewer’s attention to the altar at the bottom of the picture, respecting a perfect symmetry, while the height of the building confronts our smallness to the greatness of the sacred.