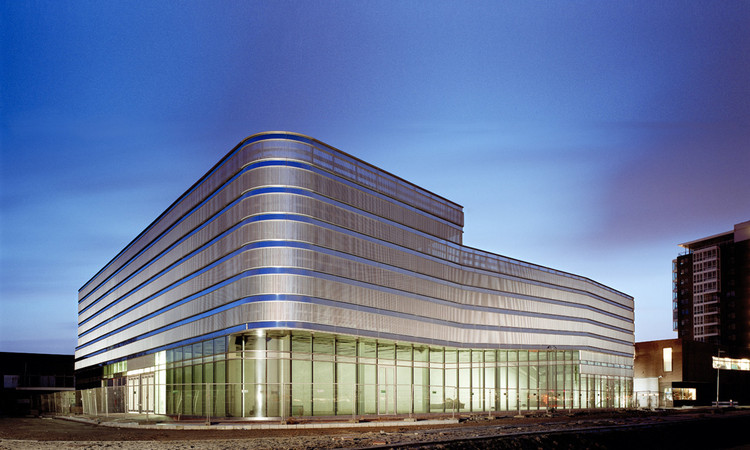 Text description provided by the architects. To solve the parking problems in the Veranda strip close to the Feyenoord stadium in Rotterdam, Paul de Ruiter was commissioned, by the City of Rotterdam Development Corporation (OBR) and Rotterdam City Supervision (STZ), to design a multi-storey car park with a high-quality architectonic character that would fit in with the urban planning vision of architect Rudy Uytenhaak. The car park was to accommodate 650 cars, as well as providing space for shops and places to eat and drink in the section of the building at street level.

Paul de Ruiter took the opportunity of this commission to improve the image of multi-storey car parks. He designed a building that has not only an exterior that is attractive to look at, but an interior that is a pleasant place to be in. Instead of the cars, people are the central issue of the design.

As the dimensions of the building plot and the height of the building were specified stringently in the zoning plan, the design team that was especially put together by Paul de Ruiter for this project, decided to locate a large proportion of the parking spaces underground. The Veranda car park is now organized around a void of nine levels: four parking levels underground and four parking levels above ground. The ground floor accommodates shops and places to eat and drink.

The floor plan of the car park building is trapezium-shaped with rounded corners and the superstructure is offset at an angle to the substructure. As a result, a sense of continuous circling movement is generated upwards and downwards around the large open area in the middle of the building.

The layout of the car park is both simple and efficient. From sloping runways in the middle of the trapezium-shaped floor plan, cars move in a spiral upwards or downwards around the centre. The car parking space is arranged both along the outer walls and beside the central open area and the sloping runway. Alongside the slow, straight ascending or descending route that you naturally follow when looking for a parking space, there is also a fast circular route for exiting from the four parking levels above ground. The parking levels are accessible to pedestrians via a glass panoramic lift that ascends from the void in the central open area.

The primary function of the central open area, measuring 16 x 22 metres, is to allow more light and air to penetrate into the car park, to improve the ambience of the underground levels and ensure that these are not inferior to the levels above ground. The permeation of light is reinforced by the white ceilings, floors, walls and the pillars of the void and the light artwork that is incorporated into it. Even underground, visitors can find their bearings, because they can see the sky and retain a link with the outer world. The siting of circular routes running upwards and downwards around the central open area means that visitors can always see where the cars and people are.

In four exhaust tubes the back pressure fans are positioned, which ensure that the polluted air from cars is extracted from the building. If a fire breaks out, the machines reverse and blow large quantities of air to level -4 of the car park, so that the fire is forced out, so to speak, through the void.

In order to create the dynamic and at the same time clear image that Paul de Ruiter had in mind - both from the inside and the outside - great attention was paid to the details and materials of the façade design. The façade of the Veranda multi-storey car park is composed of horizontal strips of aluminium, alternated with small strips of mirror glass. To combine plasticity and transparency in the façade, Paul de Ruiter himself developed the perforated and folded (deep-drawn) aluminium panels. The perforation and folding profile were tested in numerous test panels to achieve the desired result. The glass and the aluminium panels are contained in extruded aluminium profiles, which were also specially designed for this project. From the inside, the façade acts as a diffuse screen that admits daylight and gives a fragmented view of the outside world. In the evenings, the façade allows artificial light through and the building shines like a massive lantern.

Apart from the spacious and functional design, it is the details that make the Veranda multi-storey car park identifiable. To ensure that the offset in the upper levels of the façade became a smooth, uninterrupted pattern of lines, the designer and constructor had to work with great precision. Where straight, curved and diagonal lines meet, no abrupt transition must be visible, and precision was also required for the round corners of curved glass. Therefore every glass panel for the façade sections was made to measure, and these were then put together like a jigsaw puzzle at the construction site. The sun is reflected by the silver-grey mirrored glass strips that interrupt the aluminium façade. This generates a variegated appearance and gives expression to the building.

The specific façade construction of the Veranda multi-storey car park has resulted in an abstract, dynamic façade that gives the building a chic appearance with its rounded corners and rotations.

Before receiving the commission to design the Veranda multi-storey car park, Paul de Ruiter carried out an analysis of car parks. He took measurements and analysed the strong and weak points of various designs. His conclusion was that many car parks are user-unfriendly. For example, there is often little daylight in underground car parks, even though daylight helps enormously in providing orientation and the feeling of safety. Daylight can be used to mark exits and create connections between the underground parking levels and the outer world. Besides this, there is not always sufficient space, which detracts from the quality of the car park. Over the years both people and cars have become larger, and the number of older people needing more room to move has increased. Paul de Ruiter's findings inspired him to pay particular attention to clear routing, parking spaces of ample size and ease of parking, and to the availability of daylight and sense of contact with the outer world.

An architect designing multi-storey car parks needs to understand a wide range of disciplines, such as civil engineering and interior design. The challenge is to create an architectonic design from the interaction between these disciplines, partly by aiming at intensive knowledge sharing with experts. In this commission, Paul de Ruiter decided to work intensively with the geotechnical and structural engineers of building consultancy ABT and the contractor Dura Vermeer from an early stage. This led to an efficient approach, ingenious solutions and the use of various innovative techniques. The integrated approach to the design was one of the reasons that it was possible to complete the Veranda multi-storey car park within the time schedule and the specified budget, despite a very short design period.

An unusual construction method was used to build the underground parking levels; the walls-roof method. This method does not start with the standard full-depth excavation, where the structure is built up from the base, but reverses the construction procedure. Excavation first takes place to the depth of the first parking level, and the first basement floor is laid here. This floor is used to support the sheet piling foundations on all sides. After that, the ground under the floor is excavated and the subsequent floor is laid, progressing downwards step by step. The removal of soil takes place through the opening in the floors, the void. 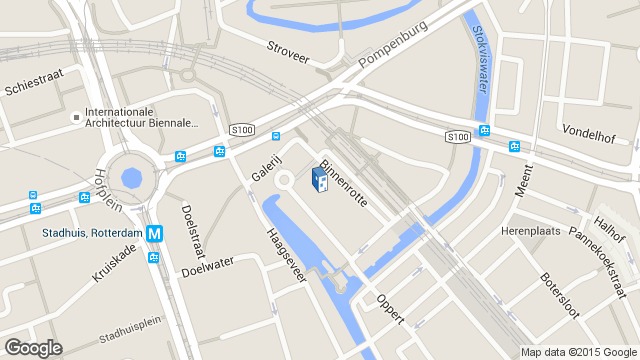 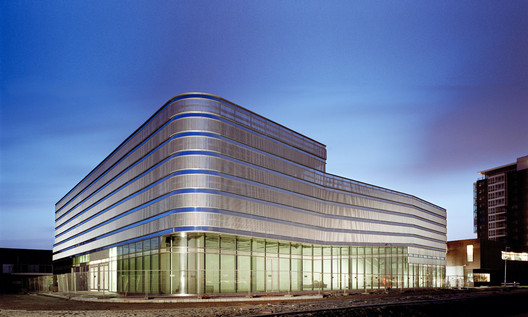