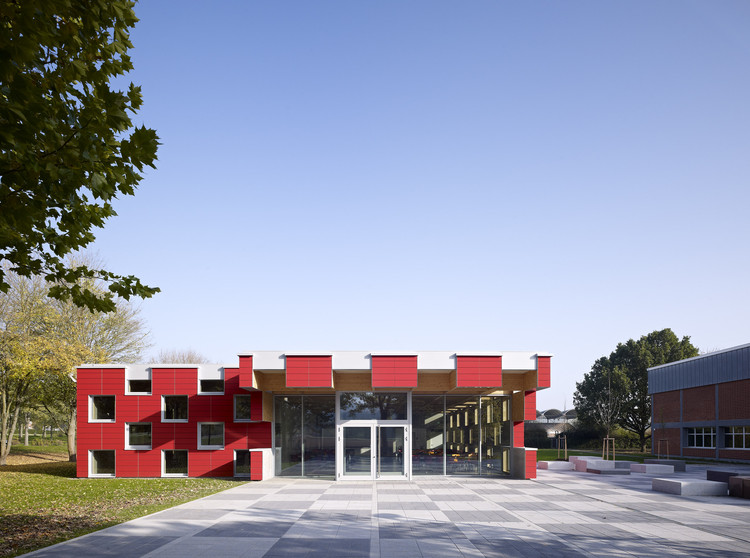 Text description provided by the architects. The new school canteen of the Salmtal Secondary School in Germany was designed by SpreierTrenner Architekten as a multifunctional building with the greatest possible flexibility. The space is used not only by children to eat every day, but also for special events such as music concerts, theatre plays or even Christmas fairs. This is why the main room was set out with a column-free square plan only subdivided by a mobile wall. The adjoining section at the rear contains all supporting facilities, such as a kitchen, storage space, toilets and staff facilities, etc. It has been set out with the option of extending it in the future.

The checked windows and the bright red facade were inspired by the idea of creating a playful and interactive, yet efficient building. The starting point was the square plan, which allowed for maximum flexibility as it’s multidirectional as well as easy to furnish for concerts uses, etc. Then all seats would be relatively close the stage. To span a square plan most efficiently a two-directional grid was used. The grid got transferred to the facade as well, so the height of the room, the size of the windows and an efficient ratio for the wood trusses determined the grid proportion (exactly 1,575 m).

The big glazed entrance opens up the main canteen room to the outside and represents a welcoming gesture. The cantilevering canopy creates a transition zone between the interior and the playground. The roof grid of the main room consists of 10cm thick and 1m high wood trusses. To keep the appearance simple all ducts, ventilation outlets and lighting are recessed in the ceiling. The integrated lighting produces glowing wood squares that turn the structural trusses into a design feature.

The squares were also used to perforate the building envelope, creating a human scale and allowing for changing outlooks and interesting insights. The surrounding landscape almost appears like pictures hung on the wall rather than mere windows. The checked windows also allow the pupils to interact and play around with their classmates relaxing outside in the schoolyard. All materials used were kept natural, robust, durable and simple. The main components were concrete, wood and ceramics.

The facade material draws its inspiration from the existing school building from the 70s, which has a red brick facade. So a red ceramics facade using 30mm thick panels was a contemporary close choice. SpreierTrenner Architekten aimed to create something vivid and playful to engage the children, but also welcome any visitors. The building is the first thing you see when you arrive at the school complex, so it was important for the school to create a building that stands out and has a general welcoming and upbeat feel to it. That’s why this vibrant shade of red was chosen. The glazed surface enhances the colour effect, makes the facade more robust to graffiti and easier to clean in general.

Although the façade is a bright red, no colours were used inside to allow the vibrant furniture to stand out. The concrete walls were constructed with a rough surface produced by OSB formwork that creates a warm texture. The floor shows the concrete screed surface, similar to the material used in car parks, covered with a transparent protective resin layer.

The architect, Daniel Spreier, wanted the children to take ownership of the building and use the surrounding spaces to relax and have fun. The checked pattern is playfully extended into the external space, which is framed by lawn areas and trees and subdivided by direct paths. The area includes two “external classrooms” consisting of staggered concrete cubes, which allow the students to sit down, run around, jump over and let out any excess energy that builds up in classroom. Since the building opened, these cubes have proved to be very successful, with children hanging out with their friends at break times and after school. 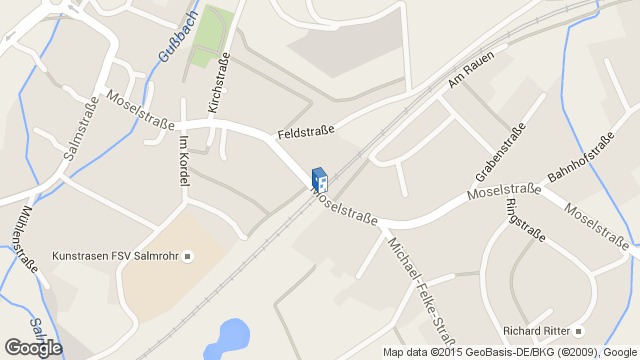