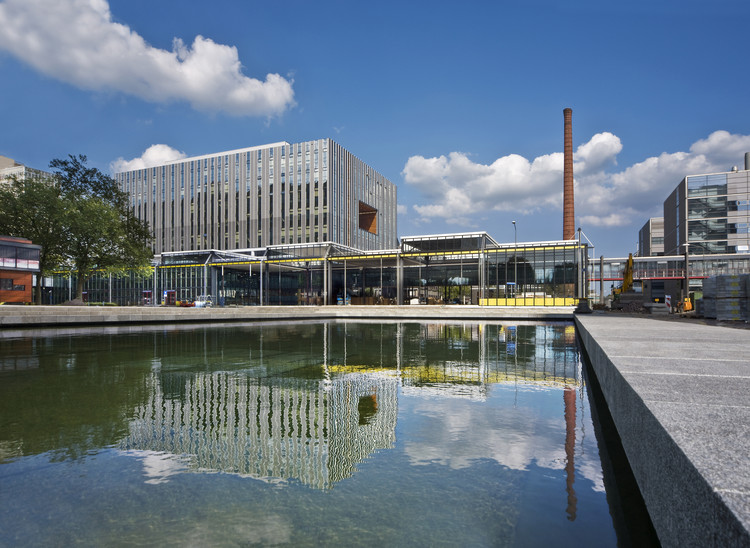 Text description provided by the architects. On the campus of Eindhoven University of Technology, Ector Hoogstad Architecten has transformed the historic W-hal, one of the oldest buildings on the site, into a modern, new main building accommodating the university library, lecture halls, catering facilities, service desks, offices and lots of space to study. Part of the hall has been converted into a spectacular, indoor events plaza, which will form the centrepiece of the revamped campus design that is currently being executed. The project also encompasses a large newbuild section: new premises for the Faculty of Mathematics and Computer Science built on top of the hall.

The W-hal (Mechanical Engineering hall) of the former Eindhoven Technical College formed part of the first generation of buildings on the campus. The building was constructed in the second half of the 1950s, after a design by architects Van Embden and Choisy. The aim was to create a flexible ‘indoor hectare’ for machinery and experiments. A clever structural design resulted in the characteristic ‘draughtboard roof’, which, together with the transparent facade, provides the interior with plenty of natural light. Its central location made the building the main traffic hub in the university’s characteristic footbridge system.

“We divided the hall into three zones,” explains architect Joost Ector. “The southern section overlaps the new ‘green carpet’, the campus’s new, central green space, and has been opened out to form a covered events area. The northern zone contains office space and the middle zone has been transformed into a library/media library, ‘study landscape’ and service point. Everything is interlinked through open connections: the first floor provides access to all sections and, as traffic level, continues to form the main junction of the TU/e. We have added new, vertical components to this: from here, you can ascend by means of a spectacular staircase to the Faculty of Mathematics and Computer Science or descend into the library on the ground floor or the new(!) basement. That produces an amazing number of sight lines. These ensure that the building will function as the meeting place on the campus. That was definitely our aim: after all, the main functions of this building are to make knowledge accessible and to encourage people to mingle."

An unusual staircase with panoramic views over the hall leads to the new accommodation for the Faculty of Mathematics and Computer Science: a newly built section providing more than 16,000m2 of floor space, which will be raised above the draughtboard roof by means of twenty slender, steel columns, “like a massive metal block,” according to Ector. The starting point for the design was a fairly traditional programme of requirements, based on a large number of small office cells. The building, organised around a surprisingly spacious atrium, provides the opportunity for this, but could also be used for very different forms of working in the future. “For the faculty of Mathematics and Computer Science, we designed extremely efficient accommodation, focusing on the need for concentration when working. Yet, here too, we paid a lot of attention to how we could facilitate contact between users. Throughout the building, there are places which invite people to chat, have a coffee or stop briefly for a serious discussion. This is also how the cascade staircase in the atrium arose; on the one hand, based on the desire to offer people an interesting walk through the building as an alternative to the lift, on the other hand to make them as visible as possible to each other.”

In a technical sense, the project is highly complex. The slimline steel superstructure pierces the original hall structure with its twenty slender columns, without the two touching. A new basement level contains installations and part of the library programme, and also serves to partially offset the weight of the new faculty building. The installations in the basement ‘feed’ the new floor of the first storey, which controls the climate in the hall like a ‘table’ laden with equipment, so that the transparent draughtboard roof could remain free from ducts.

Naturally, sustainability was one of the main aspects of the design. Ector: “The reuse of existing buildings is in itself sustainable. There was also a continual emphasis on energy saving, along with comfort. This means that you produce low-energy installations and create a building shell that provides excellent insulation. The restoration of the original non-insulated façade of the W-hal called for a well thought-out and respectful solution.” A new method was devised for this, whereby the steel ‘chair profiles’ were transformed into a highly efficient curtain wall in a sustainable, low-maintenance and reversible way. The result is indistinguishable from the historic picture. This method could evolve to become the standard solution for this type of restoration project.

“This project is very important to Ector Hoogstad Architecten and to me personally. It involves a type of job that we will see increasingly often in the future: the renovation or even restoration of existing buildings, often to make them suitable for new purposes, combined with newbuild. We were able to do that here in a challenging and technically impressive way. In addition, I myself graduated from this university in 1996 and originally come from this area. It was a great honour for me to create this building for my ‘own’ university and I am more than proud of the result.” 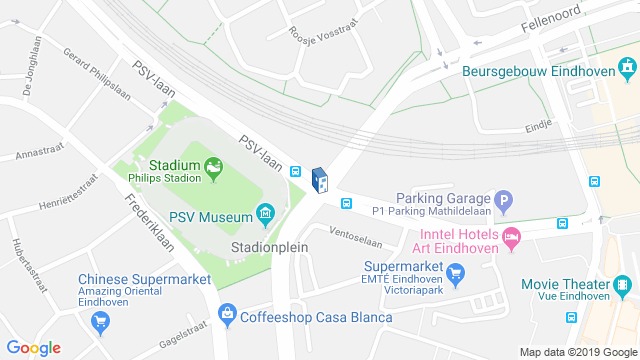 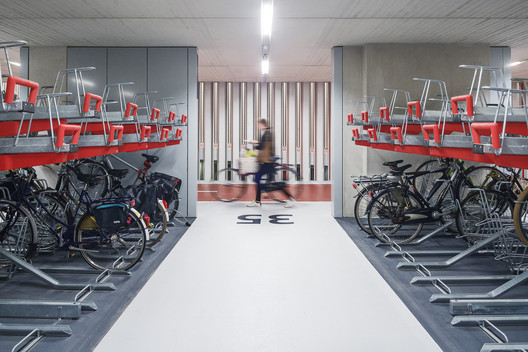