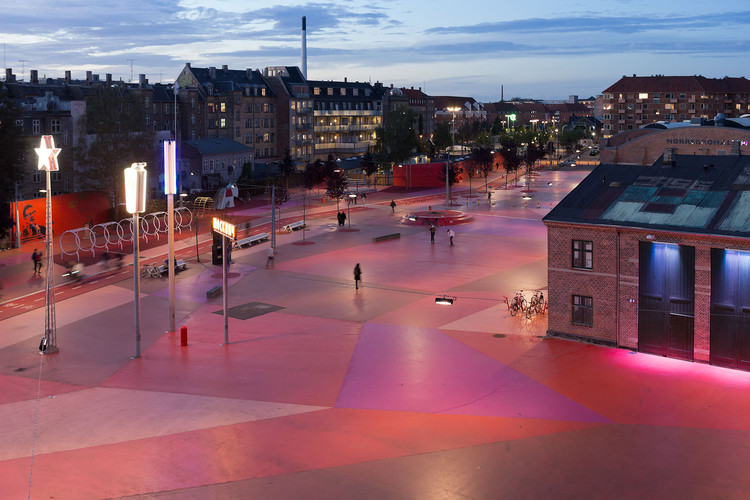 General description
Superkilen is a half a mile long urban space wedging through one of the most ethnically diverse and socially challenged neighborhoods in Denmark. It has one overarching idea that it is conceived as a giant exhibition of urban best practice – a sort of collection of global found objects that come from 60 different nationalities of the people inhabiting the area surrounding it. Ranging from exercise gear from muscle beach LA to sewage drains from Israel, palm trees from China and neon signs from Qatar and Russia. Each object is accompanied by a small stainless plate inlaid in the ground describing the object, what it is and where it is from – in Danish and in the language(s) of its origin. A sort of surrealist collection of global urban diversity that in fact reflects the true nature of the local neighborhood – rather than perpetuating a petrified image of homogenous Denmark.

Superkilen is the result of the creative collaboration between BIG, Topotek1 and SUPERFLEX, which constitutes a rare fusion of architecture, landscape architecture and art - from early concept to construction stage.

A world exhibition at nørrebro
Superkilen is a park that supports diversity. It is a world exhibition of furniture and everyday objects from all over the world, including benches, lampposts, trash cans and plants – requisites that every contemporary park should include and that the future visitors of the park have helped to select. Superkilen reattributes motifs from garden history.  In the garden, the translocation of an ideal, the reproduction of another place, such as a far off landscape, is a common theme through time. As the Chinese reference the mountain ranges with the miniature rocks, the Japanese the ocean with their rippled gravel, or how the Greek ruins are showcased as replicas in the English gardens. Superkilen is a contemporary, urban version of a universal garden.

Three zones, three colors – one neighborhood
The conceptual starting point is a division of Superkilen into three zones and colors – green, black and red. The different surfaces and colors are integrated to form new, dynamic surroundings for the everyday objects. The desire for more nature is met through a significant increase of vegetation and plants throughout the whole neighborhood arranged as small islands of diverse tree sorts, blossom periods, colors - and origin matching the one of surrounding everyday objects.

Traffic connections
To create better and more transparent infrastructure throughout the neighborhood, the current bike paths will be reorganized, new connections linking to the surrounding neighborhoods are created, with emphasis on the connection to Mimersgade, where citizens have expressed desire for a bus passage. This transition concerns the whole traffic in the area at outer Norrebro and is a part of a greater infrastructure plan. Alternatives to the bus passage include signals, an extended middle lane or speed bumps.

Market/culture/sport – the red square
As an extension of the sports and cultural activities at the Norrebrohall, the Red Square is conceived as an urban extension of the internal life of the hall. A range of recreational offers and the large central square allows the local residents to meet each other through physical activity and games. The colored surface is integrated both in terms of colors and material with the Nørrebrohall and its new main entrance, where the surface merges inside and outside in the new foyer.

Facades are incorporated visually in the project by following the color of the surface conceptually folding upwards and hereby creating a three-dimensional experience. By the large facade towards Norrebrogade is an elevated open space, which almost like a tribune enables the visitors to enjoy the afternoon sun with a view. In addition to the cultural and sportsfacilities, the Red Square creates the setting for an urban marketplace which attracts visitors every weekend from Copenhagen and the suburbs.

Superkilen’s central marketplace is located in the area of the existing hockey field. A large area on the square is covered by a multifunctional rubber surface to enable ballgames, markets, parades, and skating rinks in winter etc. The mobile tribunes of Norrebrohallen can be moved there for open-air movie/sports presentations. The square towards East allows outdoor service from the café inside by the future main entrance. Towards North, the visitors will enjoy basketball courts, parking spaces and an outdoor fitness area.

Urban living room – the black square
Mimers Plads is the heart of the Superkilen Masterplan. This is where the locals meet around the Moroccan fountain, the Turkish bench, under the Japanese cherry-trees as the extension of the area’s patio. In weekdays, permanent tables, benches and grill facilities serve as an urban living room for backgammon, chess players etc. The bike traffic is moved to the East side of the Square by partly solving the problem of height differences towards Midgaardsgade and enable a bike ramp between Hotherplads and the intersecting bike path connection. Towards North is a hill facing south with a view to the square and its activity.

Sport/play – the green park
Bauman once said that “sport is one of the few institutions in society, where people can still agree on the rules”. No matter where you’re from, what you believe in and which language you speak, you can always play football together. This is why a number of sports facilities are moved to the Green Park, including the existing hockey field with an integrated basketball court as it will create a natural gathering spot for local young people from Mjolnerpark and the adjacent school.

The activities of the Green Park with its soft hills and surfaces appeals to children, young people and families. A green landscape and a playground where families with children can meet for picnics, sunbathing and breaks in the grass, but also hockey tournaments, badminton games and workout between the hills. 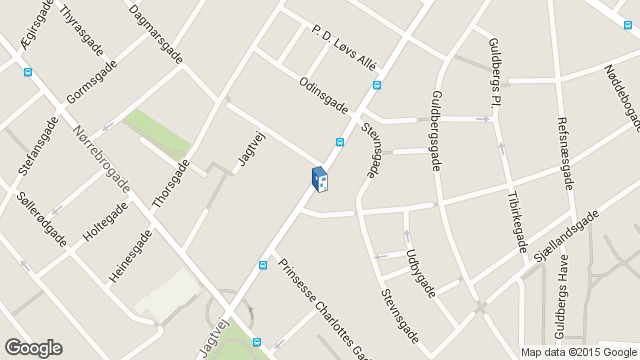 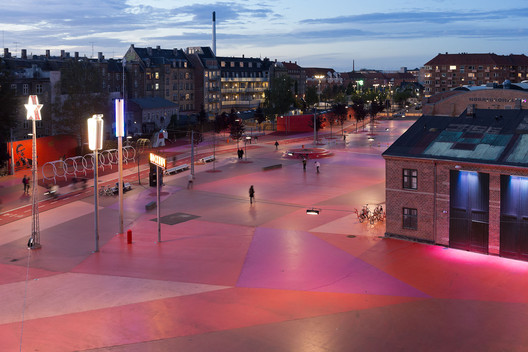