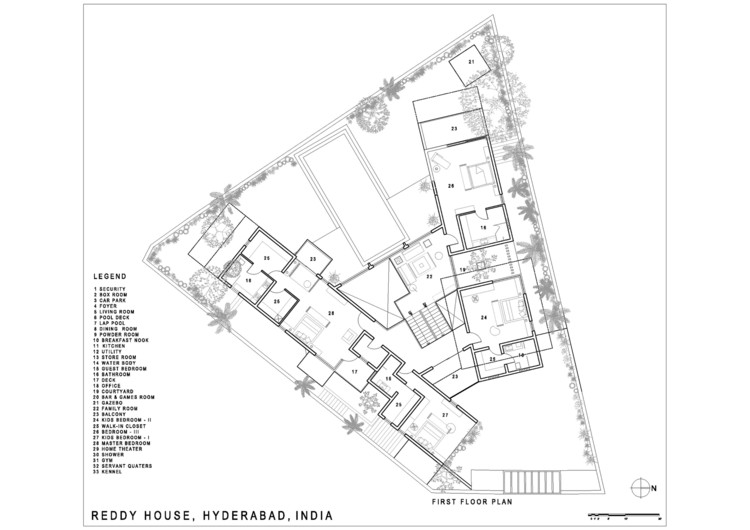 The Reddy house responds directly to the topography of the site on which it is constructed.

The site, in upmarket Jubilee Hills in Hyderabad, was steeply inclined and rocky, and in orientation flaring out towards a west view.

The architects used the sharp incline and rocky terrain to their advantage, creating living spaces on various split levels.

The form of the house also derives from the triangulated shape of the site, with two wings of the built form flaring out from one another, leaving space in between for any airy central atrium that negotiates four split levels. The light roofs also follow the same gesture and reach out similarly towards the view.

The western sun in Hyderabad is fierce, especially in the afternoons and to mitigate this, the designers created sweeping cantilevered roof forms with ample overhangs. Further, the large expanses of glass on the west have mechanical horizontal louvers that can be controlled to admit the desired amount of sunlight.

On entry from road level one encounters a foyer that via a flight of stairs leads down to the living room and to the pool and garden beyond. Stairs lead up to an intimate family area as well as another bedroom before proceeding to another 3 bedrooms for the family.

Two side courtyards in the plan – one on the entry and the other on the lower level act as focal points, and provide respite to their respective spaces. The dining area court has a pebbled pond and an indigo blue wall as a backdrop. The living area court is finely pebbled and wrapped with a magenta wall.

The stark white facades of the Reddy house are punctuated occasionally by saturated Indian colours such as a Indigo blue , deep ochre and magenta.

The colour scheme otherwise is light with vast expanses of a beige sandstone floor offsetting other natural local materials such as sadharhalli granite, wood, slate and kota stone.