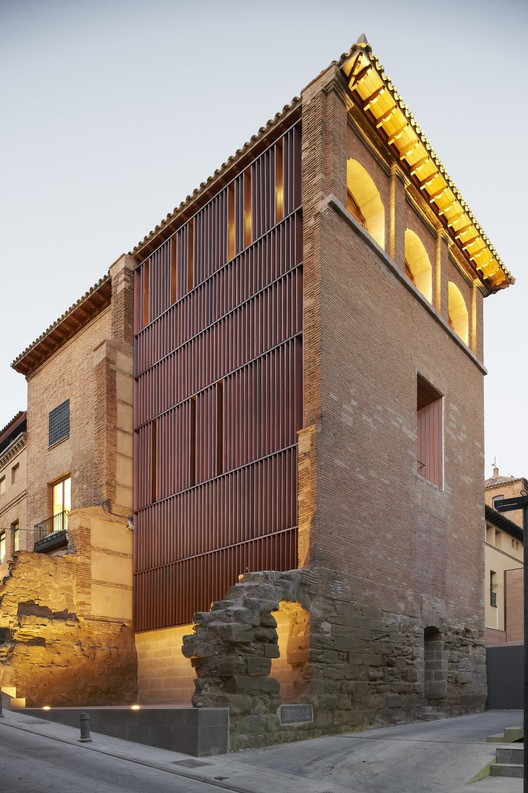 The project deals with the Refurbishment of the West Tower of the Huesca City Hall in order to turn it into City Archives.

Due to its position and volume, the Archives round off the set of buildings that make up the Huesca City Hall which gives the impression of being an unfinished construction, for the east and west walls are party walls and it seems as if in the past, they might have had an adjoining construction:

In the intervention, we intend to treat the side closings, east and west, turning them into façades, so that the unfinished piece will turn into a tower with presence of its own.

The new façades will carry folded copper, a fine material with a good relation with the existing materials – stone, bricks and timber –, and which is present in the first City Hall Extension intervention, thus integrating the work into the set. The plinth is made from sandstone belonging to a castle and it is similar to the existing one.

As a formal reference of similar historical architecture, we thought of the abstraction of the wooden machicolations of the defence towers. This is the reason why the new façade establishes a heavy-light dialogue with the original volume and has a small projection as is usual with this type of constructions.

The Archives’ image has also had its purpose as a book container as a reference. In the Library unit, a few slats have been removed, thus creating deep cracks that allow light into the inside in a way which is coherent with the distribution of the books. The spaces left by the slats are like the space left by a book in a big scale library.