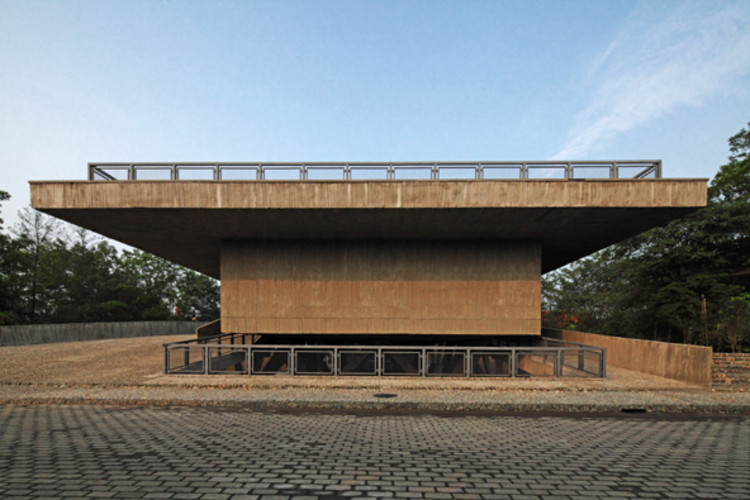 Officially named 1966-1976 Major Events Pavilion, this is a museum that houses the artifacts from the Great Cultural Revolution period from Mr. Fan Jianchuan’s collection. Located in the Jianchuan Museum Town in Anren, Sichuan, over a river, the museum building is simultaneously a pedestrian bridge. Therefore, it is nicknamed Museum-Bridge.

The design of Museum-Bridge is built upon three observations as following:

The Chinese architectural tradition has to include the design heritage from the 1950’s to 1970’s, when the Soviet-influenced Socialist Realism took the central stage. However, if the ideological semiotic is striped away, the formal language of the said style is classical in essence. Balance, completeness, simplicity, etc. are some of the key values. Since the Museum-Bridge will be where one goes to reflect one of these decades in the early half of the twentieth century, it becomes important if we as architects could construct the continuity of time by offering clues of the architectural manifestations of that historical period. Furthermore, the project evolves into a mission to trace back the development of Western Classicism in China and to see the possibility of carrying on the classical spirit in contemporary design. The observation materializes in the museum per se in the form of a simple volume with a large cantilevered roof.

Beauty of Roughness or Brutalist Classicism

Yet, the classical principles are questioned through out the design process, for instance, the museum box has no base or foundation as a typical classical building would do but supported on slanted columns. More visibly, the elegance of the Classicism is subverted by the roughness of the concrete surface. As the entire structure is built with concrete by the unskilled local labor force, the result has become a celebration of roughness. Inspired by the work of painter Lucian Freud which engaged a “brutal” realism to confront the humanity of the contemporary man, we wish the “Brutalist Classicist” architecture of the Museum-Bridge may gain an instantly aged appearance that could aid the visitors in search for the meaning of the history. As far as concrete itself, we have come to the realization that the highly refined quality of concrete, as in Japanese architecture, is not the only expression and it is possible to achieve other forms of beauty in concrete. Our motto is: Learning from Brazil.

Urban Infrastructural Architecture: We see the bridge as the continuation of the street and our intention is to further blur the boundary between infrastructure, architecture, and city. The bridge is covered by the cantilevered eaves of the museum box to create outdoor architectural space and a stopping point for visitors and passersby, meanwhile the eaves serves as the portal of the museum.

The interior of the museum is lit by four sky lights that cut across the ceiling and the exhibition installation is being designed by Mr. Fan. The under-bridge open space will be used for exhibition, tea, and performance and the roof terrace for sculpture display in the future.