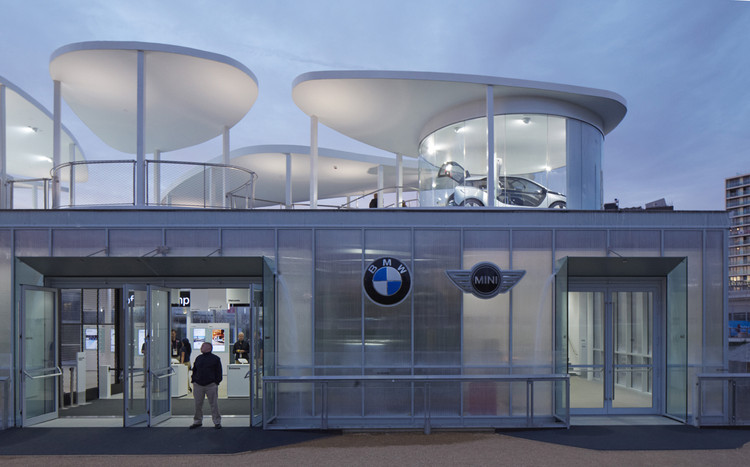 The British have a particular fondness for the Victorian bandstand. Not much more than a lightweight roof supported on slender columns the idea of the bandstand is to get close to nature by stripping back the architecture to a minimum. There is no role for exotic form and shape-making: the architecture’s beauty comes not from itself but rather from its open attitude to its natural surroundings.

With the Victorian bandstand as a point of departure, the BMW Group Pavilion seeks a similar relationship to its setting. In practice, this has involved addressing questions of spectacle and presence, of the relationship to BMW’s product and service offering, and of sustainability.

Positioned directly on the Waterworks River in the Olympic Park the pavilion required a certain presence and aesthetic interest. This is achieved by re-imagining the classical podium — the base that thrusts the architecture upwards — as something completely immaterial or ethereal, but with even more power to excite and inspire. The traditional plinth is massive and heavy. The pavilion plinth is immaterial, light, and animated: water streams down around the ground floor creating a constantly changing facade. The first floor that forms the plinth is covered with water; this water spills down on all four sides of the pavilion entirely covering the ground floor. This urban water wall therefore forms a liquid podium apparently supporting the delicate pavilions above it. We envisage the water doing more than creating an exciting visual effect. The surface of the first floor is essentially a thin reflective pool. This pool reflects its environment: the cars, the visitors and the Olympic site. The flowing water also creates an enclosure. The pavilion is thus able to capture the intimacy and ‘other worldliness’ associated with life behind the waterfall. But above all, the waterfall creates excitement through animation, noise, and constant change.

One of the pavilion’s functions is to display BMW’s new fleet of electric and hybrid vehicles. These vehicles use carbon fibre bodywork with fluid soft curves. The geometry of the pavilion roofs manifests a similar calm and rationale attitude to geometry through the use of off-phase sinusoidal curves set out in symmetrical arrangement. The dynamism of this form is a function of the immediate associations: wave forms, fluid dynamics, air flow all incorporate similar patterns. What is important here is that this form is an abstraction of these associations. The geometry does not imitate or in any sense look like something else: it is therefore best understood as the idea of fluidity.

The pavilion itself is conceived not as one mega-form but rather as a family of smaller pavilions. The original architectural conceit was of a group of pavilions huddled close together during the Olympics — but at the end of the Games dispersed to other locations. Each pavilion would find a new home within a natural setting. The pavilions would represent a constant reminder of the Olympics. This idea has a symbolic resonance: it reinforces the connection with the environment. This connection with things natural is at the heart of sustainability.

The Showcase provides information on the relationship between sport, new technologies and sustainability and features BMW’s electronic and hybrid concept cars. Located between the main Olympic Stadium and the Aquatic Centre the building is positioned directly above the Waterworks River. The architecture is designed to be light and ephemeral and to reference the unusual site condition through the inventive use of the river water. The ground floor, which is used for information display and entertainment, is internally oriented and is therefore expressed as a simple rectangular box placed on piles above the river. The upper floor, in contrast, is open to its surroundings with products that are on display not only to the visitors to the Showcase but also to the spectators in the surrounding area. Therefore, this part of the building is conceived as a series of small rooftop pavilions.

The lower storey is covered with a waterfall that flows from a reflecting pool. This waterfall disguises the supporting platform under the building and cools the building by evaporation, convection and reduction of solar gain. The GRP-lined reflecting pool is supplied through a series of sumps fitted with cover gratings. The water for the waterfall is drawn from the river by submersible pumps set on platforms above the river bed. Each pump is separately controllable and delivers water to the reflecting pool sumps via a matrix of pipe work and diffuser inlets. The water circulates to all areas of the pool before spilling over building perimeter via an adjustable perforated weir edge detail designed to create a white water effect. The water is treated using a series of strainers, filters and sterilizers — no chemicals are added to the water. The pump sets incorporate 150mm pre-filters to remove suspended solids drawn in by the pumps.. The main pressure pipe lines are fitted with in-line three-lamp UVC sterilizers providing a UV dose greater than 30mj/ cm². Such a dose relates to a 99.99% kill rate assuming 80% UV transmission per cm.

The reflecting pool on the upper storey surrounds the nine rooftop pavilions. These pavilions feature curved semi-monocoque timber shell roofs supported by steel columns. The timber shells incorporate curved 147x47mm timber joists on 600mm centres laid out in the direction of the roof curvature with noggings set between the joists at irregular intervals. The stress-skin, using the principles of boat building technology, is made from three layers of 9mm cold formed cross laminated ply sheets glued and screwed into place. The engineers used a parametric digital-to-fabrication process to convert the complex curved forms into complete sets of cutting profiles for the fabrication of the joists and ply sheets. The 150x150x10 RHS steel columns are placed at irregular intervals to facilitate visitor movement and viewing sitelines. The columns bolt to a timber edge beam in the timber roof and a curved RHS steel edge beam running around the base of the pavilion. The timber shell roofs were fabricated off-site in 3m lengths, craned into position, and bolted together. The rooftop pavilions are designed to be demountable so that they can potentially be installed in different locations after the Games.