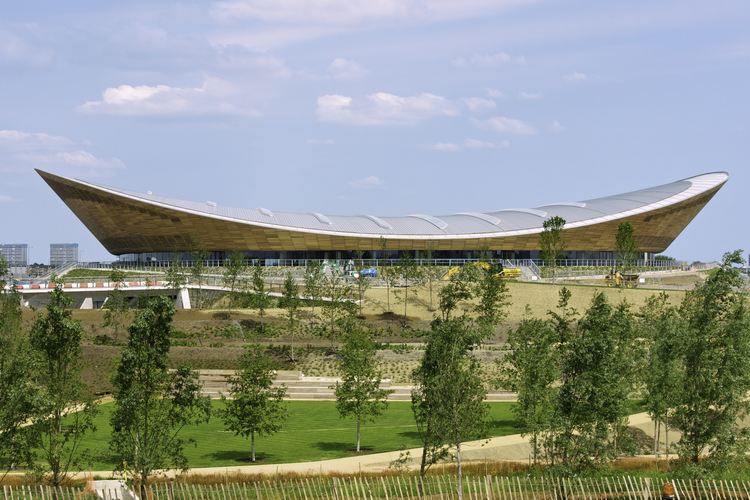 Text description provided by the architects. Cycling inspired the concept for the Velodrome. The bicycle is an ingenious ergonomic and aerodynamic object which is honed to unrivalled efficiency and beauty. From the beginning of the design process, we wanted to apply the same level of design creativity and rigor of engineering that goes into the design and manufacture of a bicycle to the building itself. It was important to us that this not serve to mimic but rather that it manifest itself as a three-dimensional response to the functional requirements of the stadium. By applying the same thought developments and form-finding approach, the aesthetics and shape of the stadium emerged directly from this process.

The Velodrome contains 6,000 seats in both Olympic and Legacy Modes and embraces both contexts with minimal transformation. The upper and lower seating tiers are split by the main public circulation concourse which forms the main point of entry into the arena and allows spectators to maintain contact with the action on the track as they move around the building. The concourse is fully glazed to allow views both into and out of the building. It also helps to visually separate the Western Red Cedar-clad upper bowl from the ground floor back-of-house accommodation which is largely hidden behind the landscaped earth berms that form a visual plinth at the eastern and western sides of the building.

The Olympic Delivery Authority set a number of challenging sustainability targets for the project; through careful consideration and integration of the architecture, structure and building services the design has met or exceeded these requirements. Our design strategy for the building focused on minimizing demand for energy and water and integrating this into the fabric of the building to reduce reliance on systems and infrastructure. The daylighting strategy applied to the main cycling arena exemplifies this approach. Rather than investing in photovoltaic panels on the roof of the or in other ‘bolt-on’ technologies, designing for maximum daylight proved to be a much more economical solution which yielded far greater benefits in terms of reducing carbon emissions.

A great deal of effort was thus put into developing and optimizing rooflights in the main arena to provide sufficient daylight for training purposes for most of the year. Special diffusing glass was used to prevent patches of sunlight from appearing on the track and to give a high level of diffuse light inside the building. Energy-efficient artificial lighting linked to an intelligent control system can be used to provide elevated lighting levels for major events. This achieves the best balance between energy savings due to daylight use without incurring excessive glazing areas, which would compromise the thermal strategy of the building.

As a publicly-funded project in the public eye, the competition-winning scheme has been subject to numerous rounds of Value Engineering. These were embraced in a positive manner by the design team, leading to further increases in the efficiency of the design and a reinforcement of the original concept. Not only did this enable the design to remain on target in terms of cost but it has also ensured that the amount of material, embodied and operational energy has been kept to a minimum. As a result of the use of the structurally-efficient cable net roof structure it has been calculated that approximately 1000 tonnes of steel have been saved compared to a more standard form of roof.

The main arena is highly-insulated and completely naturally ventilated in mid-season and summer, significantly reducing energy demand. Extensive computational simulation was used to refine the size requirements for air inlets and outlets to achieve the required level of ventilation. These are seamlessly integrated into the building facades and in combination with exposed thermal mass in strategic locations allow passive cooling of the building in the warm season.

Finally, rainwater is harvested from the roof and stored in the undercroft at the west end of the building behind the berm. Recycled rainwater is used to supply the WC/Urinal flushing and any wash down points, along with irrigation of the Velopark when completed post–Games. Using the park-wide non-potable water only as top-up for the rainwater system in periods of low rainfall or high water demand and the use of water saving fittings throughout the building the Velodrome is predicted to achieve an annual reduction of 75% in potable water demand. 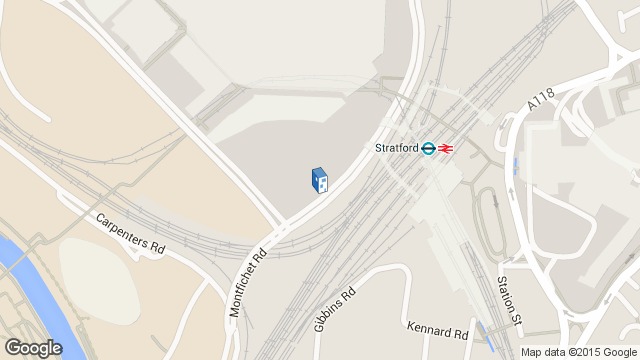