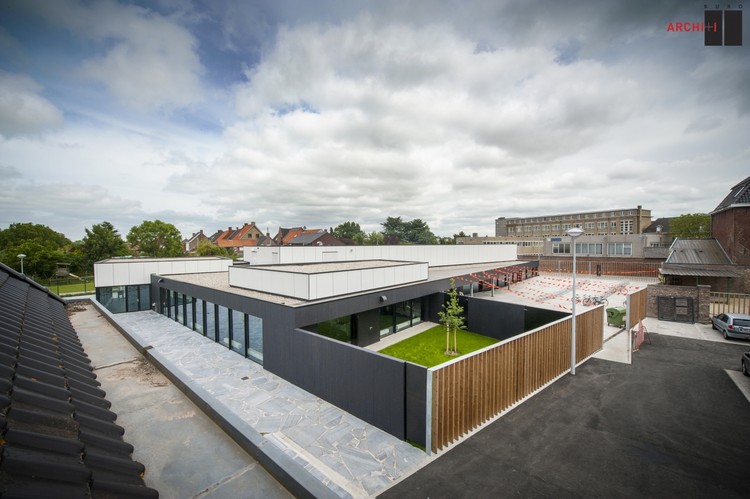 The presence of brick walls at and around the site is a visually dominant element in the existing structure: they enclose the buildings, giving rise to ‘outdoor rooms’ that constitute an integral part of the way the entire site is used. From these rooms and through informal routes, one gains access to the youth building and the city park. The design retains and confirms the intimate nature of the existing site. Airy indoor rooms are interspersed with walled outdoor rooms, which together form a harmonious whole. The wood-panelled wall ensures a separation between the various rooms, but also provides subtle perspectives and a form of social control.

The large courtyard with parking provisions and the garden of the youth building already formed two clearly separated areas. The entrance room to the new building became the third room. Here visitors can meet each other before and after concerts and parties, and can have a smoke under the canopy. The fourth room is an enclosed patio at the youth department. Deliveries for the party hall and the rehearsal room take place by way of the fifth space. Finally, the last open air room is formed by a paved outdoor playroom. This room provides a connection to the Burggraaf Frimout Park where a newly constructed playground completes the full integration of the youth site within the park.

The project is fourfold: a renovation of the existing school building, a new building with party hall and rehearsal rooms, a replacement new building for the youth meeting rooms and finally the new playground and the completely redesigned outdoor environment.

The organisations were formerly located here and there throughout the existing school building and there was still quite a lot of unused space: a new arrangement led to an optimisation of the use of space. In this, full use was made of the height of the ground floor level by providing some rooms with mezzanine levels. The façade was completely repointed, load-bearing beams replaced, and a new ceiling was put in. In addition, the building got a new entrance and new toilet facilities.

The new building was deliberately kept low; Poperinge is not a city of high-rise buildings. The new building consists of four easy to read boxes with an industrial look which makes it immediately clear where the party hall, the youth department, the multipurpose hall and the rehearsal rooms are to be found. The wood-panelled wall that delimits the outer rooms constitutes an integral part of the architecture and is a binding and recognisable element throughout the site.

The acoustics were an important consideration in the new building. The walls have a separate concrete layer and are finished with two layers of acoustic insulation. The floor was also insulated. In addition, a vestibule has been added that not only serves as an entrance hall but also ensures that noise and heat stay inside. 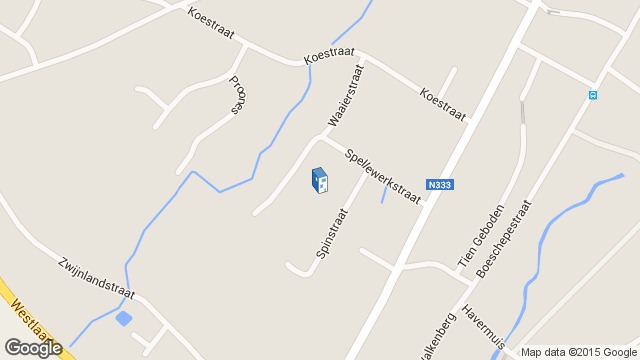 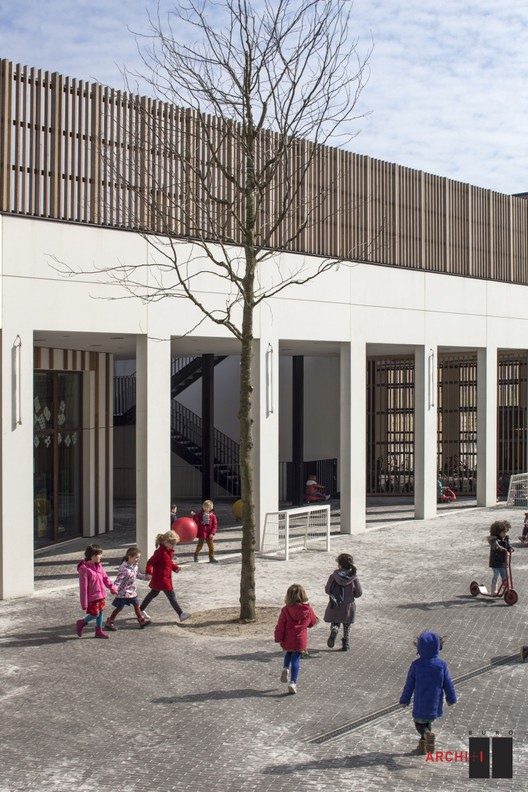