Save
Footbridge over the River Segre / Ravetllat Ribas Architects

Text description provided by the architects. The footbridge seeks only to be a link between the two banks of the river Segre where it crosses the city of Lleida. Understood more as an itinerary than as a place in which to remain, the new footbridge at no time pretends to erase the perception of being suspended at a great height over the riverbed. This thought has led to an adjusted dimensioning that make compatible pedestrian and bicycle traffic with that of service vehicles. In this way, the crossing of the entire width of the river is solved with two single pillars and no other support.

The landings are very different on each one of the margins. On the right side, the footbridge support seeks to avoid any substantial alterations in the surroundings, and the margin rises in order to absorb the height difference caused by preserving the hydraulic section. In contrast, on the left bank, the void existing between Avinguda dels Camps Elisis and the new wall of the riverbank allows to develop a wider landing of the bridge, which extends seamlessly and becomes the footbridge. This sector of the bridge, widened in the shape of a fan, is transformed into a place that invites the user to remain and watch the historic city, crowned by La Seu. At the same time it offers a shady corner over the river park. The aim here is to erase the limits between the footbridge and the city, extending the urban elements on firm ground –paving, benches, pergolas– accompanied by the appearance of trees that follow the edge of the river, through the same perforations that allow light to penetrate to the lower part of the bridge.

The structure of the footbridge seeks to be consistent with these design intentions, and is attempted to offer a platform free of visual obstacles, where the profiles of the city and the river take the stage. Two steel box beams arranged on different levels, stiffened by means of transversal beams made from the same material and a concrete slab, permit understanding the surface as a structural suite with a Z-section. This helps to reduce the total edge in the challenge of bridging the eighty-three meters of the central span. The slab overhangs the lower beam by 1,15 metres and reduces the visual effect of the two-meter edge.

This Z-section features two different elevations and two ways of linking up with the surroundings. In the south-facing side, the slab overhangs the lower beam and is crowned by a glass balustrade, supporting the vistas over La Seu and the historic city. In the opposite side, the top beam acts as an opaque balustrade and constitutes the elevation of the bridge. 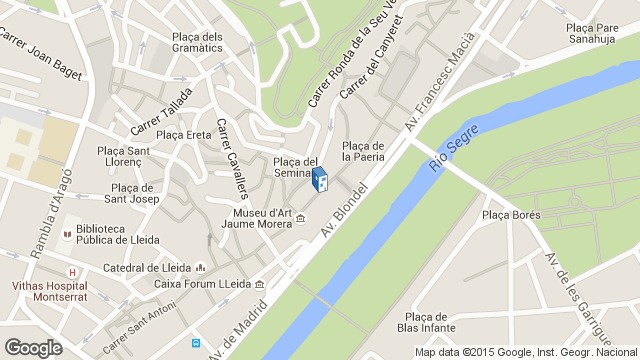