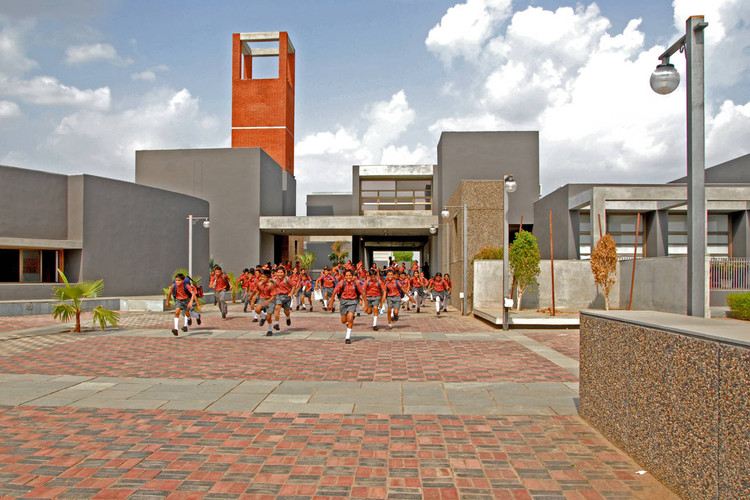 Text description provided by the architects. The Adani Vidya Mandir is envisioned as an answer to the growing trends of so called “international schools”, providing free education to the adept but deprived classes. he project is located in the vicinity of “The Sarkhej Roza” which is an important historical site, and approached from S.G highway in Ahmadabad. It is a G + 1 structure with a built up of 120,000 Sq. Ft.in site area of 28,704 Sq. Yards.

As per the site zoning the administrative and primary education related functions are kept in the front followed by Secondary and Higher Secondary at the end respectively. Each classroom’s strength is 40 providing platform of 1200 students per year. The school has basic supporting infrastructure such as laboratories, computer center, dining hall, assembly hall, etc.

The building is a composite structure comprising exposed concrete, exposed brickwork and plastered masonry work as basic materials. Red Agra stone, Kota stone and washed terrazzo are used as primary flooring materials.Steel studs and steel shear pins are used as structural components along with exposed R.C.C. walls and columns to free the horizontal planes from the vertical columns at few junctions.

The master layout depicts the scale of an institutional building with informal yet controlled play of built and open spaces. A series of experiences are crafted with a distinct response to the immediate context via conscious design process. The entry marked by the only vertical element integrating the temple distributes the school into its other functional divisions. The journey beginning with entrance plaza to transition space leads to the core area following hierarchy of space.

Spatial expansions in form of courtyards and water bodies compliment the functional organization to achieve the institutional character. Orientation of built forms with the large openings facing north direction omits the direct exposure to harsh sunlight and provides ample of indirect natural light and cross ventilation as an ideal response to climate. Water body along the circulation area provides a buffer to the functions beside it and subdues the scale.

In primary education zone the curvilinear corridor spans along the green space and merges with the oval shaped activity area to provide a seamless transition in movement. Building facade is treated with uneven formation of punctures relating it to the informal spatial organization. Capitals, bell tower and courtyards break the monotony of the planer surface as well as the horizontality. As a common foci of the entire planning bell tower remains the iconic element throughout the building. 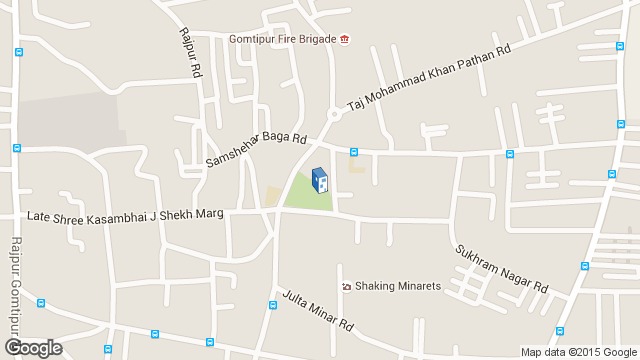 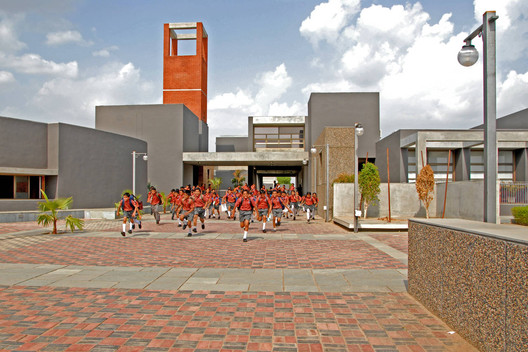