The Garage Center for Contemporary Culture – a non-profit international arts space based in Moscow founded by Daria Zhukova – has unveiled plans for a new building in Gorky Park. Designed by OMA, Garage Gorky Park will renovate the famous 1960s Vremena Goda (Seasons of the Year) restaurant, a prefabricated concrete structure that has been derelict for more than two decades. Garage is expected to complete and occupy this 5,400-square-meter building sometime next year, with plans to later expand to the nearby Hexagon pavilion (or Machine Pavilion).

Rem Koolhaas: “We were able, with our client and her team, to explore the qualities of generosity, dimension, openness, and transparency of the Soviet wreckage and find new uses and interpretations for them; it also enabled us to avoid the exaggeration of standards and scale that is becoming an aspect of contemporary art spaces.” 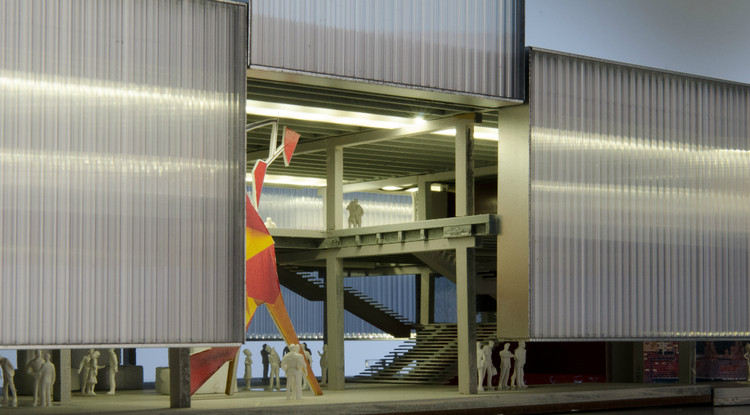 The existing concrete ruin has been exposed to harsh weather for quite sometime. Despite this, the building is structurally sound and still preserves the “collective aura of the Soviet era: it is a sober and rigorous public space adorned with tiles, mosaics and bricks.”

A new translucent double layer polycarbonate façade will enclose the existing concrete structure and house most of the buildings infrastructure, such as ventilation and fire stairs. It will sit 2.25 meters above the ground in order to visually reconnect the pavilions interior with the park.

The main entrance is marked by an 11-meter-high section of the polycarbonate surface that is designed to be lifted up, emphasizing the public entrance and exposing the contents of the interior lobby and exhibition space.

The existing two levels of unobstructed open space will be transformed into dedicated exhibition areas. At a height of 5.65 meters, the ground floor will function as an experimental zone, where exhibition programs will share space with public events in the lobby. The 3.7-meter-high upper level will act as a conventional exhibition space for painting, sculptures, video, photography and other media.

The existing core walls, clad with brick and decorated with green tiles, will be repaired and preserved. They will serve as a colorful backdrop for the exhibition spaces. If needed, hinged white walls can be folded down from the ceiling, creating an instant white cube.

A 9×11-meter opening in the upper level floor will double the height of the lobby to 10-meters and allow for extra large sculptures. If the exhibition featured does not require this double height space, the opening may be covered with a walkable, light metal grid that is otherwise hoisted up to the ceiling.

A promenade will wraps itself around the building, connecting the lower level with the mezzanine and housing a café, bookshop and mediatheque. The Café will act as an informal living room, decorated by artists and outfitted with Soviet era furniture.

An auditorium, children’s room, and mediatheque will be united on the mezzanine, giving more prominence to Garage’s educational mission and allowing spaces to be shared for more crowded programs.

The Stalin-era Gorky Park was planned in the 1920s by renowned soviet Constructivist architect Konstantin Melnikov, who also designed Garage’s previous home, the Bakhmetevsky Bus Garage. Opened in 1928, Gorky Park extends 300 acres along the Moskva River in the heart of Moscow. The park is undergoing a major renovation and regeneration project, of which Garage Gorky Park is a major part.