SADAR + VUGA, in collaboration with LENS°ASS Architecten, has been selected as winner of an invited competition to design three new buildings on the Campus Schoonmeersen of the University College Ghent in Belgium. The campus development master plan will include a new building for the Study of Social Work (SOAG), a Sports Hall Extension and the Renovation of Building B that includes the adjoining Student Plaza. This highly anticipated project is expected to commence in late May. Continue after the break to learn more about each new facility. 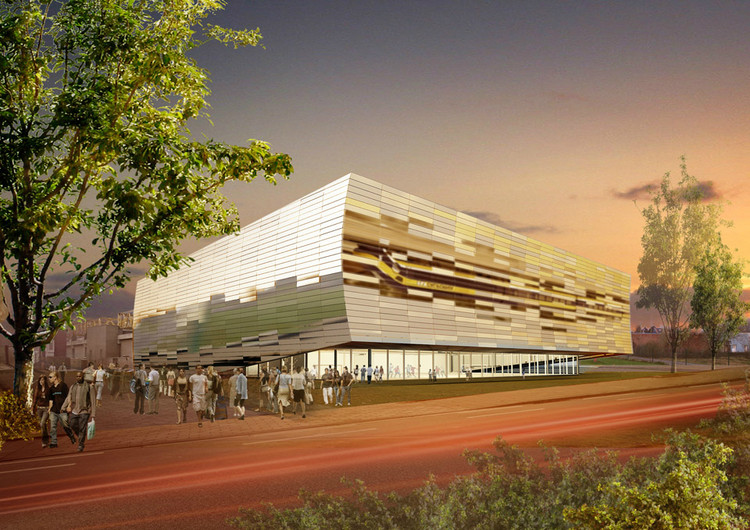 The proposal aims to create two new campus gateways linked by a “spatial and experimental” connection that incorporates a new social hub, known as the Student Plaza. Each project will exhibit their own distinctive character and will be the first markers setting the tone for future campus development.

First, a permeable rectangular volume for the new Building for the Study of Social Work (SOAG) will set the stage for the southern campus gateway. Second, an elevated reflective volume will form the new sports hall and northern campus gateway. And third, a grand circular fountain will act as the main gathering point for the student plaza and a new cafeteria will arise out of the existing auditorium. All three projects aim to become social hubs within the campus and new public destinations for the city of Ghent, unlocking the true potential of a university campus within a city.

New Building for the Study of Social Work (SOAG):

The new SOAG building will be the first structure constructed. Its free standing volume is set back off the Voskenslaan, creating an open transitional space for the residential homes along the street and the large green axis of the future master plan development. The building connects with its immediate surroundings by means of a permeable shading membrane and horizontal lamellas that evenly wrap the building’s transparent volume. This wrap further connects with its context as it opens up at the north-west side of the building to create a large entrance arch in front of the plaza, revealing the buildings interior and welcoming visitors.

The building acts as a “hybrid studyscape”, where students, teachers, visitors and a general public meet, interact, study, work and play. Two big round atriums provide visual connections throughout the buildings interior, while both vertical and horizontal circulation on the atriums edges provide a smooth transition between the floors, thus eliminating the need for corridors.

The “central stripe” within the two atriums becomes a new type of school space. It is developed on four levels, from the entrance level to the inhabited roof, and serves as a space for meetings, gatherings, informal events, performances and spectating, as well as for study and work. It is described as a vertical semi-public space, where activities on each floor are evenly stimulated by the visual connections throughout the atrium. “Side stripes” break off of the “central strip” to form the entrances to classrooms.

Serving both the citizens of Ghent and the students of the University, a public promenade is stretched throughout all the levels of the building, passing by an exhibition area, working desks, study chambers and a cafeteria, ending on the roof. This promenade showcases the “life of the school” by acting as a presentation route.

Marking the northern gateway to the campus, the new Sports Hall extension appears to cantilever over its transparent ground floor. By exposing the interior sports ground floor, the building entices people to enter. Once inside, a ramp guides pedestrians away from the campus route and up into the stands of the Sports Hall, acting as a public promenade that allows visitors to view all the activities taking place in the building.

The core of the existing sports hall is extended and adapted to house new administration, the gym and the meeting and social areas. The existing exterior facade becomes the new interior wall of the new sports hall, maximizing the potential of the existing structure with minimal interventions.

The semi-reflective, concave surface distorts and reflects the surrounding context in an effort to emphasize the focus on the interior events, while becoming a spectacle itself. Movement surrounding and within the building is reflected onto its surface, creating an ever-changing and lively facade.

Student Plaza and Renovation of Building B:

The hexagonal pavement of the vast student plaza smoothly transitions into Building B and various areas of grass, gravel or asphalt, thus allowing the plaza to appear more as a zone than a completely defined area. This plaza will operate as the campuses main area for informal activities and social gatherings.

As the plaza and existing auditorium were once closed off from each other, this proposal swaps the position of the new cafeteria and existing auditorium in order to directly link the cafeteria to the student plaza and the auditorium to the calmer area at the back of building B. The plaza’s surface smoothly transitions into the new multipurpose cafeteria, while the original structure is stripped and closed walls are partially cut out in order to generate a bright, sunlit space that is strongly connected to its surrounding.

The main attraction of the plaza is a large, circular fountain, outlined by a wood deck. Described as the “Eye” of the plaza, this space will become the main social space for the campus and the stage for many informal events.