This residential project in Ahmedabad, India by Vatsu Shilpa Consultants follows the metamorphosis of an old vacant rowhouse into a renovated townhouse into a final fusion with the adjoining building. The project began in 2004 and went through several modifications and additions. By 2010, the adjoining house was purchased and 56+55 Sumeru was created. 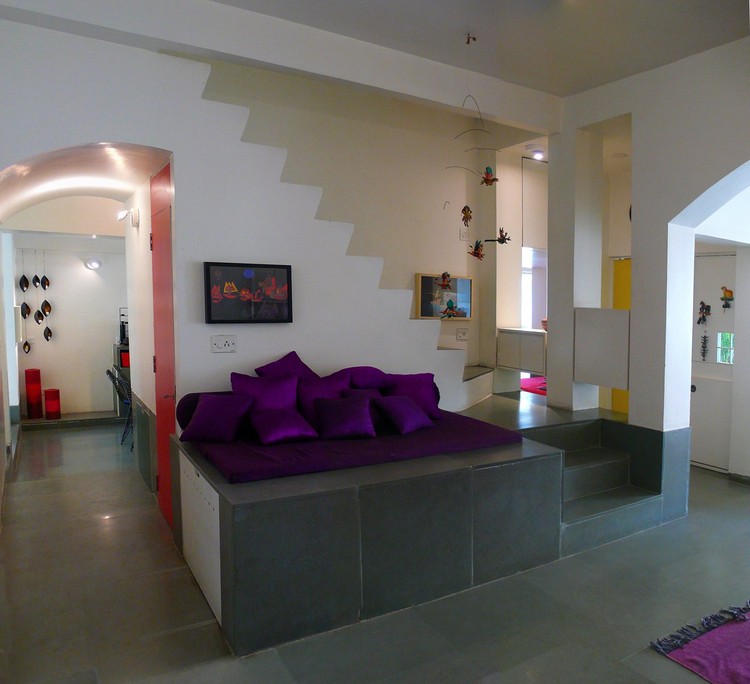 The transitions of the design were marked by life and style changes by the clients.  The first decision was to convert the cramped row house that they purchased into an airy townhouse in which a young family could grow and develop.  As the family grew the house needed to be adjusted and the living spaces were expanded on the ground floor to allow for a playroom.  The original house was dominated by the North-South axis.  By acquiring the adjacent property, the house was expanded, not only providing more space but also creating a East-West axis and views in all four directions.

The design was guided by the desire to draw as much light into the interior spaces as possible.  To achieve this, the architects chose to provide connections to the front and rear yards on the narrow plot by widening openings and tearing down existing walls.  It was a meticulous process that involved stripping the house down to its bare structural minimum and rebuilding it from there.  The property walls were raised to provide privacy while also creates a white surface off of which sunlight could be reflected into the house.

In order to create the illusion of space on the small lot, the architects maximized their interventions in the section, using the geometry of vaults, arches and columns to create a variety of spaces in which to relax or pause and varying ceiling heights to fluctuate between intimate and family spaces.  The house and its materials and furnishings are simplified.  Kota Stone and a white tone is used throughout.  Punctuation of color is added through the belongings that the inhabitants bring into the house such as textiles, books, and paintings.  Much of the furniture is built into the architecture, creating seating spaces that can also be used as circulation through the house.  A central plinth is located at the connection of the houses and unites the two, providing the base for the staircase.

The hot and dry climate of Ahmedabad affected the design greatly. High insulation values of the walls and roofs were important, as well the reflectance of the surfaces to avoid absorption of heat into the space. Large openings have deep shades in the north and south and also provide for cross ventilation. Skylights and lightwells in the center provide daylight deep into the house, reducing reliance on artificial lighting.