Save
In Progress: Bosco Verticale / Boeri Studio
Share
Or
Copy

Bosco Verticale, by Boeri Studio (now recognized as Barreca & La Varra and Stefano Boeri Architetti), is a high-density tower block that experiments with the integration of a lush landscape within the facade of the architecture. The Vertical Forest, currently in construction in Milan, Italy, deal with the concept of regenerating the lost forests on the ground within the inhabitable space of buildings. The towers are 80 metres and 112 metres tall. Together they will have the capacity to hold 480 big and medium sized trees, 250 small size trees, 11,000 groundcover plants and 5,000 shrubs – the equivalent of a hectare of forest. For more on this project, follow us after the break. 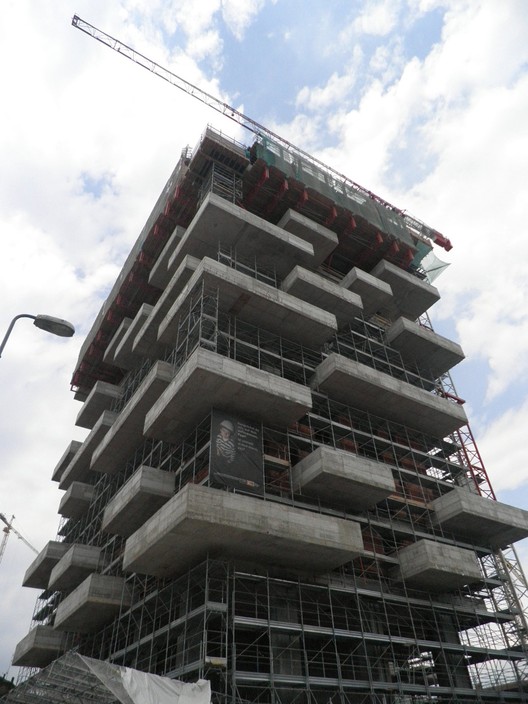 Living on the facade as they do in the wild, the plants facilitate the same operations that a “smart facade” would. They filter out dust from the air, absorb carbon dioxide and release oxygenated air into the atmosphere and living quarters, while also providing shade and a micro-climate that cools the air in hot summer months.

This “recolonization” of the urban environment with biological growth generates a biodiversity that also creates a safe environment for animals that thrive on these plants as food and shelter.  This brings life into areas of the city, life that is typically reserved for parks and gardens.  The idea here is to generate environmental corridors.  These environmental interventions also mitigate the build up of toxic gases in the environment and help purify the air in the urban atmosphere.

The selection and cultivation of plants for this project was highly considered, as well as the placement and distribution of plants among floors in order to create a successful irrigation system.  As a whole, the building functions as its own type of ecological system working between both the landscape and the intricacies of housing design. The tower form of the buildings was chosen to help prevent against urban sprawl, providing residents with a private landscape within their apartments while offering the same advantages of living in a city.  The proposal is the equivalent of 50,000 sq meters of forests and family houses in a sprawl setting.