The final entries are in for the international redesign competition of the St. Petersburg Pier in Florida. The competition seeks to generate a new identity and iconic landmark that will honor the history and relevance of the Pier for the next generation. Michael Maltzan Architecture, BIG and West 8 Urbaban Design and Landscape Architecture are the three architectural firms selected from the list of nine semi finalists. Continue reading after the break to view the radically different design proposals. 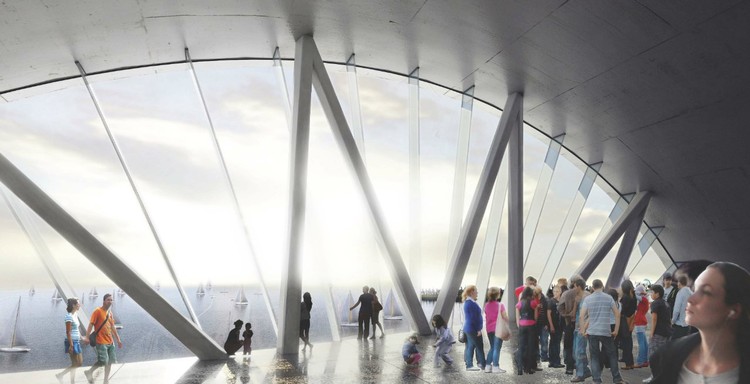 “For us, the ultimate significance of the Pier is not as an object, or even a single park, but as the central element connecting downtown St. Petersburg with its waterfront.”

The Lens aims to reframe the relationship between the City, the Bay and the people of St. Petersburg. The proposal stitches the bay and the pier together through a variety of nontraditional infrastructure that offers an array of experiences, from various water sports and fishing, to retail and cafes, and an underwater reef full of sea life.

A pre-cast white concrete canopy with micro turbines integrated within its surface, rises above the lens and water, evoking waves or sails, as the Twin Bridge Paths create a non-traditional promenade above and below it. A lower, wood-clad deck accommodates pedestrians, runners, bicyclists, the Pier Tram and service vehicles. The network of pathways provides an array of experiences within the lens, while serving a dual purpose of rainwater collecting and harvesting.

The Lens offers spaces of informal and formal gathering. Remains of the existing pier’s underwater structure is mimicked within the new framework for an “extraordinary new aquatic landscape.” A publicly visible and rich marine habitat supports the regeneration and growth of sea life, while providing an influential source of environmental education. The reef within the lens will include a 2.5 acre oyster habitat, sufficient to clean 20 million gallons of sea water per day. This reef is experienced through an Intertidal Pathway, which leads to an open-air amphitheater that descends to the waters edge.

As it is important to the livelihood of future generations, sustainability is an key element that is integrated throughout the project. Passive design techniques will achieve at least a 50% reduction in energy use over code standards. Wind power takes advantage of prevailing winds and will be the major power generator for the project. Solar thermal, photovoltaics, solar desalinization and tidal power are additional energy efficient techniques integrated within the design phases.

The design proposal does not stop at the pier. The holistic approach not only redesigns the pier, but also includes a cohesive plan that also incorporates the Bay area connecting to the pier. A new civic green space, referred to as the Civic Loop, sits upland, opposite to the lens. A great lawn and the continuation of pathways directly connects the activities of the pier and life downtown, while reshaping the uplands southern edge and creating a continuous pedestrian promenade.

A hub lies between the land and water, providing a new amphitheater, Water Park and playground. This area connects the beach front with additional cafes, retail spaces, transient boat slips and a series of plazas which will be the economic driver for the project. Each area is “woven into the next” to ensure a seamless and unified design.

For an in-depth overview of The Lens, click here.

BIG’s The Wave encompasses three main elements – Tributary Park, Wave Walk and The Wave. The project strives to create a deeper connection with the city of Petersburg and the water, emphasizing on interaction in the form of physical touch. The first phase of construction will include The Wave and Wave Walk. Tributary Park will be realized in the second phase.

Tributary Park anchors the pier with a multitude of individual events that occure across the pier, the park and the city. A “network of paths form a tributary of public life that gradually flows together to form the pier as the paths flow into the bay.” Indigenous plants provide native a “color coding” of personality to each destination area. Simple manipulations to the “branches” allow for a variety of destinations, each with unique purposes. Parking is relocated further into the downtown, in order to open up the potential of a more deeply connected inland, while freeing up land for development.

Wave Walk occurs as the Tributary Park pathways come together to form the pier. The pier transforms to accommodate a series of water related activities that allow for direct interaction with the water. The pier steps up and down, framing swimming pools for athletes and mini ports for kayaks, canoes and small boats.

The energy of the Wave Walk “springs from multiple point in the city, on the waterfront, in the marina and parks – gathers momentum as it enters the bay and finally climaxes in a big wave of public life – populated beneath and on top – within and around.”

The Wave is a single intervention that allows citizens to admire the city and water from a series of vantage points that occur above, below and within. Each floor of the Wave has a direct relationship to each phase of the water cycle. The proposal offers different rooms including a salt bath, mist room, botanical room, steam room, cloud room, snow room, polar bear club, water slides and swimming pool. Additionally, the phases of the water cycle also coordinate with programs connected to a culinary, digestive and water play loop.

For an in-depth overview of the Spa Park, click here.

The architects at West 8 envision a “timeless, well connected experience” that will remain an iconic destination for the people of Petersburg for the next hundred years. The proposal is comprised of four districts, each with unique “experiential qualities” that “ripple out from the city to the horizon.” These four districts are The Vital Waterfront, The Municipal Marina, The St. Petersburg Preserve and The St. Petersburg Romantic Heritage.

The Vital Waterfront aspires to become an emerging downtown “cultural crescent, supported by dining, art, culture and a cosmopolitan lifestyle.

The St. Petersburg Preserve re-imagines the upland site as an accessible, urban preserve that encompasses “terrestrial and aquatic environments.” This habitat is envisioned to be rich with birds and aquatic life. Boat traffic is separated from the fragile habitat, in order to preserve the existing biotope. This area is meant to be a convenient retreat that directly connects the people with the water.

“The romantic heritage of St. Petersburg is about living a life in paradise with toes in the sand, sun on one’s face and views of the horizon.”

The Million Dollar Pier is elevated above the 100-year storm surge and is engineered to withstand “major wave action.” The pier will provide fishing, kayaking, swimming and areas for community gathering.

A precast concrete public pavilion will provide shade, natural cooling and capture a cooling ocean breeze in order to create the “perfect microclimate.” The structure offers 360 degrees of open-air porticos and four levels that include a belly chamber, concession floor, panorama deck and panorama ring.

For an in-depth overview of the Peoples Pier, click here.

The jury will make their final selection by January 20th, 2012. The City Council will then review the assessment and approve the winning design by February 2, 2012.

Starting December 6th, all design proposals will be available for a free public viewing at the St. Petersburg Museum of History. The exhibit will conclude on December 30th. Visitors are encouraged to view the proposals and vote for their favorite here.