Save
Atlantic Yards: B2 Bklyn / SHoP Architects
Share
Or
Copy

SHoP Architects has shared with us the B2 Bklyn building which will be the first of the residential developments for Atlantic Yards in Brooklyn, New York to break ground, scheduled for 2012. Standing at 32 storeys, it will be the world’s tallest pre-fab building, saving both on cost and waste. 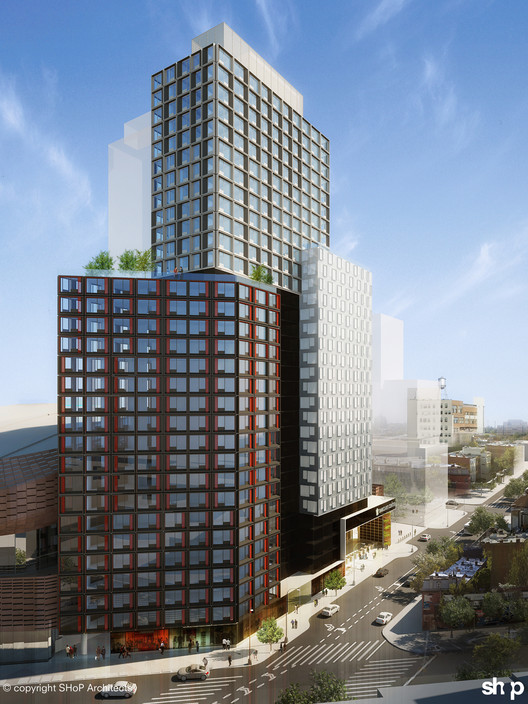 The final articulation of the volumes were developed by addressing the requirements of the Design Guidelines established by the Empire State Development Corporation through a series of setbacks. The buildings present a variety of colors, materials and fabrication techniques, creating an assortment of patterns and textures on Brooklyn’s skyline. The residential buildings are integrated with shopping and storefronts at ground level, in hopes of creating an inviting streetscape. (via SHoP Architects)

Atlantic Yards has been in development for a number of years now. The redevelopment includes 22-acres of Downtown Brooklyn between Flatbush Ave, Fourth Ave, Vanderbuilt Ave and Dean St, by Forest City Ratner Companies. It will include 6 million sf of residential space, an entertainment arena, Barclays Center, 247,000 sf of retail use, 336,000 sf of office space and 8 acres of publically accessible open space. The plan, which was designed by Frank Gehry, will also include the expansion of the Atlantic Terminal Transit Hub and a new maintanence and storage facility for the LIRR.

via SHoP Architects and NY Curbed