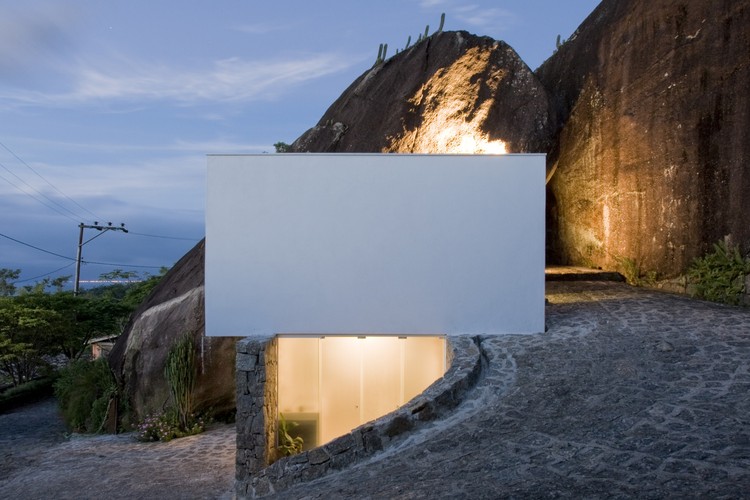 Text description provided by the architects. It is a small construction with an equally simple program:A caretaker's house of a property on an island on the North coast of the State of São Paulo, Brazil. The site, at 100 meters above sea level, next to two enormous rocks, already had the old caretaker's house, one-story house with stone walls and clay roof tiles.

The new building has 2 floors, a white suspended box, where the bedroom is and it is possible to see the continent and the São Sebastião Channel. Under it, at street level, are the living room, kitchen and bathroom.

The wood used on some doors and windows, staircase, shelves and furniture are leftovers of material used to make scaffoldings and molds for the white box reinforced concrete structure.The 3.00 m x 5.00 m white box is supported on one side by an existing retaining wall and on the other by a wall built with stones, a characteristic of local constructions.

This movement shapes the other 3 spaces of the construction, the access yard, between the box and the retaining wall that curves following the parking lot ramp's floor, the courtyard, between the box and the rock and the void created under the box, where the living room is.The impact caused by the image of concise volume, in comparison with the large rock's amorphous exuberance, gives it a strange sensation.

During the work, the caretaker Zé Maria, still not content with his future living quarters, compared it with a can of sardines, a container as those he sees passing through the channel or even a cooler, like those used by beachgoers to carry beer.