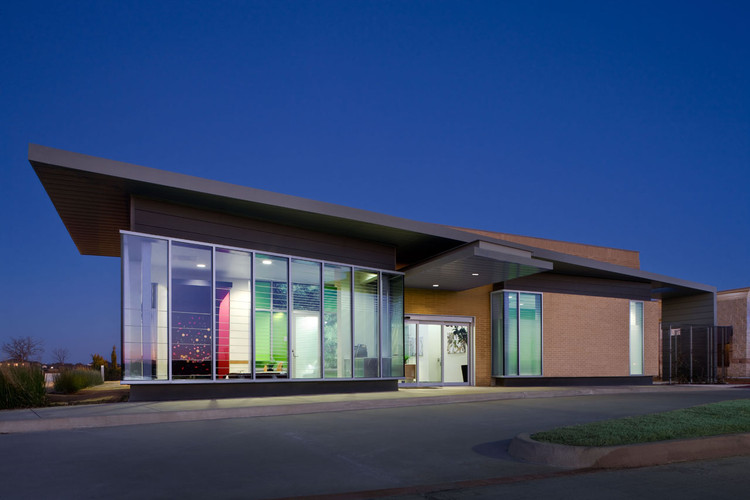 Text description provided by the architects. LegacyER is a free-standing 6,200 GSF Emergency and Urgent Care facility in Frisco, Texas, consisting of Urgent Care Rooms, Special Treatment Rooms, Radiology Suites, and Trauma Suites organized around an elemental ceiling spine, originating from the point of patient entry, that bisects through the interior spaces. Aiming for rigorous simplicity and clarity of occupant flow, spatial qualities are likewise mapped logically through the use of light, reflectivity, and translucency.

Welcoming the patients, two sandblast-patterned glass volumes hover underneath a continuous zinc-clad roof plane, which turns down at one end to provide enclosure for a landscape-screened patio area. The diamond-polished integral-color concrete floor adds to the spatial dimension of the interior by reflecting the abundant daylight that comes through rhythmically-spaced skylights above the primary circulation. Translucent resin panels, layered in hues of green, clad the primary operational backbone of the practice, which includes the Reception, Triage, Laboratory, and Nurse Station spaces. Treatment room doors composed of laminated liquid crystal glass shift with a touch from transparent to opaque, giving the patients their privacy while indicating to the staff that the room is occupied.

The interior is composed primarily of materials more commonly seen in hospitality and spa environments. As an effect, the building achieves an engaging balance between the aggressive, vigilant presence on the exterior and a tranquil interior ambience, offering a soothing place of respite for patients seeking emergency care.

The project survived multiple challenges from the beginning. The Client had approached Huffman Builders, a Medical Office Developer and Design-Builder, for their new facility knowing that Huffman Builders produces buildings that conform to a particular design prototype of residential materials and construction techniques. Through a previous relationship, Huffman Builders then introduced 5Gstudio to the Client who, during an initial meeting, mentioned their personal preference for a modern structure. Taking on that cue, 5Gstudio developed drawings that did not conform at all to the initial expectation of the Client and Huffman Builders; however, the Client fell in love with the proposed design for its openness, clarity, and sensitivity to their passionate goals of elevating the level of patient care.

5Gstudio spent a great deal of time educating Huffman Builders on the expectation that comes with the proposed aesthetic and introducing them to new materials and details. The City of Frisco Planning Department then became involved, and they expected that the proposed design be substantially altered to match the existing neighbors, a prototype CVS Pharmacy to the south and a Crème de la Crème facility to the north. The design approval process took five months of negotiation, at one point almost causing a complete abandonment of the design direction. However, in the midst of city negotiation and navigating through other concerns raised by the builders, auspiciously, the design won a First Place Healthcare Environment Award 2007 for Professional Conceptual Category in an international design competition organized by the Center for Health Design. The Award re-convinced the Client to adhere to the design, and it helped convinced the City of Frisco to approve the project as designed. 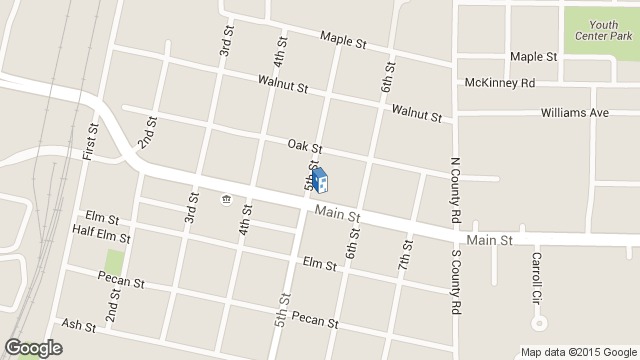