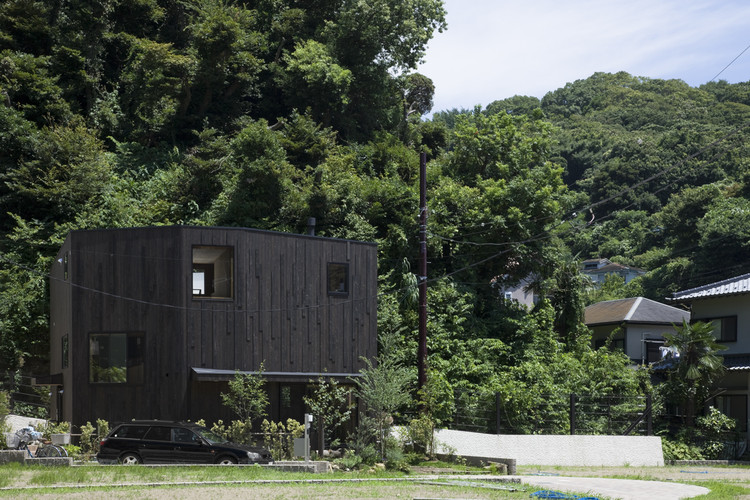 Text description provided by the architects. This is a house for a married couple with 2 children located along the old district of houses in the ancient city, Kamakura in Japan. The form of the house is a heptagon which fits the site form, and it contains a volume of 2.5 layers. On the ground floor located a share space with living-dining room, kitchen and an atelier connected to the door. The atelier is due to become the classroom of the craft where the neighbors will gather in the future.

On the first floor which forms split-level, there are a work space, a low-ceiling storage space and a Japanese-style room which can serve as a comfort space or supplemental bedroom for the guests. On the next level which goes up the half floor, there are private rooms such as bedroom and children space. When it goes up to the next half level, there is a terrace and attic storage. This is not only a house but also a working space, a place for creative activity, and the place where people gather as a classroom. We thought we would like to create the multipurpose space which can accept such various activities all together.

A space is divided into east and west by the stairs in the center. And cross-sectionally, the storage space with half-floor height (CH=1.4m) is inserted between the ground and the first floor on the south, and between the first floor and the roof on the north. This split-level system stretches the space in a vertical direction, and creates the spaces with various volumes. It makes the complex sequence, such as the space on the first floor appearing from the well of 1.5 stories on the ground floor, or the upper and lower floor being overlooked in the same time. You can hear the voice and feel someone's presence, however you can't see him.

The construction duration from deign starting to completion is only 7 months. The construction system we chose is the wooden mixed structure of the conventional method and two-by-four system. The outside parts as a building shell was build by wooden conventional method in order to acquire the aseismic capacity, and the other inside parts was build by two-by-four system, which is relatively inexpensive and easily-worked as a framework and operates for long-period axial force.

Because the clients were an illustrator and a crafter, we leave the space for them to arrange during their life there; the finishing of the wall is exposed structural lauan plywood without any furniture and shelves. Each time we visit there after construction, we find the handcraft furniture, for example a post at the entrance, desks at children space and shelves between two-by-four posts which is made by left-over wood.